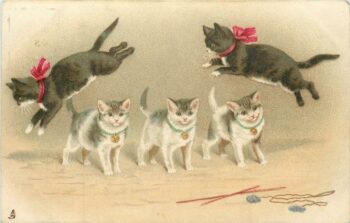 I love reading posts which offer unique cat facts, as I always seem to learn something new. Perhaps you, too, will learn some new fact about your kitty from this list. Read on, and enjoy!

1.) Eating grass rids a cat’s system of any fur and helps with digestion.

3) Count your cat’s whiskers. Each side of his face has about 12 whiskers.

4) Cats are more popular than dogs as pets in North America. The numbers come in as 63 million dogs and nearly 73 million cats.

6) They discovered a kitten with green fur in Denmark in 1995. Though originally

thought to be a genetic mutation, scientists later determined that high copper levels in the water supply caused the green color.

7) Cats’ back claws don’t get as sharp as claws on their front paws. Thus, they have lots of trouble getting down out of a tree because those back claws don’t help much with the descent. They need to descend backwards, but that is not instinctive in a cat, so it can take him a while to figure it out.

8) Mad at your cat? The animal can tell by your tone of voice. Sweet-talking the cat gives you a definite advantage.

I am finding this one to be especially true when I’m trying to get my cat to finish a meal. If I talk sweetly, or even sing my request, the cat will respond positively more often.

11) Cats have the necessary skill set to be able to learn how to use a toilet.

12) Cats can’t detect sweetness in anything they eat.

13) A cat prefers food at room temperature — not too hot and not too cold.

14) The Snow Leopard, a variant of the California Spangled Cat, always has blue eyes.

15) Most cats don’t have any eyelashes.

16) If you want your cat to get along with a dog, the best case scenario occurs if they are introduced when the cat is less than six months old and the dog less than a year old.

17) Your cat has the cognitive ability to sense your feelings and general mood. You can’t fool the cat.

18) One-third of the time your cat spends awake will usually be spent in cleaning himself.

19) Cats breed in warm weather, so global warming may bring us even more cats.

20) In early Egypt during the time of the Pharaohs, killing a cat could invoke the death sentence.

21) Most cat litters contain from four to six kittens.

22) In multi cat households, it is best to have both sexes. Cats of the opposite sex become better housemates.

23) Though the Ocicat looks like a wild cat, it does not have an ounce of wild blood.

24) You know male cats are toms, but did you know that the term for a female cat is either a “queen” or a “molly.”

25) A cat would rather starve itself than eat something it does not like. I can vouch for this one — If Pogo doesn’t like a certain food, he simply refuses to eat it.

26) A cat can jump up to five times its own height.

27) In the United Kingdom and in Australia, seeing a black cat brings good luck.

28) Yes, cats can have dreams. They start dreaming when they are a week old.

29) One litter of kittens might have multiple “father” cats.

30) The APOP (Association for Pet Obesity Prevention) claims that about 50 million of our cats need to lose some weight.

31) An outdoor cat has an average lifespan of about three to five years, while an indoor cat can live for 16 years or more.

32) A cat uses its whiskers to measure openings, indicate mood, and for general navigation.

33) Genetically, cats’ brains resemble that of a human more than dogs’ brains.

34) In the wild, a cat will eat seven to 20 small meals a day. Thus, if you are having trouble getting your cat to eat, try offering smaller meals more often. I am finding

this technique to work when trying to get my old cat to eat.

35) At Christmastime, be careful with that poinsettia plant, as it is poisonous to your cat.

38) Your cat’s field of vision does not cover the area right under its nose.

39) The two outer layers of a cat’s coat have the names of guard hair and awn hair.

40) Cats do not like anything with a citrus smell.

42) Would you like another name for a hairball? Call it a “bezoar.”

43) Make sure your cat gets a little fat in its diet. Cats cannot make this nutrient in their bodies on their own.

44) Of all the mammals, cats have the largest eyes.

45) A cat’s equivalent of a fingerprint can be found on his nose. Each cat nose print makes its own unique pattern.

47) A cat named Dusty holds the record for having given birth to the most kittens — 420 in her lifetime. What a good thing we don’t produce in the same quantities.

48) When a cat’s eyes close, it could mean fatigue, but it could also indicate a happy or pleased cat.

49) Remember those needle-sharp milk teeth of a young kitten? After six months, the kitten loses those needle teeth, and the new ones are not quite as sharp.

50) Most kittens have blue eyes at birth, and the color can change as they grow older.

The reference I used for this post came from: