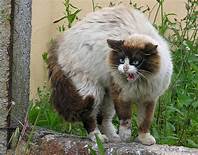 Hello, readers. It’s Lucinda the literate cat, with number nine of my cat behavior solutions columns. This one answers a question submitted by a member of my fan club, a Mr. KC from Jacksonville, FL. Here’s his question:

I would be interested in getting a cat’s point of view on TNR (Trap-Neuter-Return.) We certainly need to do something, as it is estimated that there are over 68 million stray or feral cats in the United States alone. Here in Jacksonville, our community is very active in the TNR program. How do you, as a cat, feel about this program?

Before I address your question, let me supply a couple of definitions for our readers. A stray cat is one who once lived in a two-legged home, but for some reason is there no more. A feral cat is one who is born in the wild and has no, or nearly no contact with two-leggeds at all.

You have raised a question about a grave problem in the cat world. Too many of us are not lucky enough to have a home. Some of us who did live with two-leggeds either ran away or were thrown out.

I do declare — for creatures who are supposed to be so much wiser than we cats, you two-leggeds don’t always understand that when you agree to adopt one of us, you must keep your end of the bargain and be responsible for our care for our entire lives. You are not supposed to just throw us out on the streets. If the relationship has become intolerable, at least take us to a cat shelter. Just make sure it is a no-kill shelter.

I have only met a couple of feral cats, so can’t speak for many of them. However, we are all cats, whether we live in a home or not. I can therefore give my point of view.

A feral cat has to eat. These cats tend to gather in areas where the hunting is good or food is available. They may 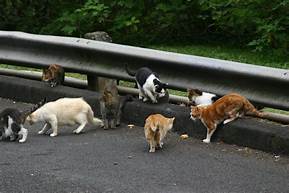 congregate near a restaurant dumpster or near a dump, or someplace where two-leggeds leave out food for them. I have read of cases where cats in some places like these have been rounded up as they forage for food. Then the cats are taken out and shot.

Sometimes knowing how to read is not a good thing. I do not enjoy reading such stories. That’s as bad as some of the stories I have read about two-leggeds, rounding their own people up and killing them. Someone needs to teach you two-leggeds some better ways to solve problems.

We cats do not have language. Yet we have established rules that we learn from kittenhood, and for the most part, we get along. Yet even with your ability to communicate through speech, you cannot seem to learn to get along with each other.

We cats may get into fights, but we don’t kill each other just to reduce the population. Perhaps, however, there is something to be said for wars. They seem to be an approved method for controlling your two-legged population.

Maybe we should start a Cat World War I, and require every feral cat to enlist. Then we need to issue weapons of mass destruction so we can kill each other off more efficiently.

I understand that the problem is that we reproduce too many times per cat and have not one or two, but several kittens. Then we have to feed and care for them, and the problem grows.

Two-leggeds need to know that we really aren’t in charge of such things. At certain times, when we “go into heat,” as you so quaintly call it, we lose control. Our bodies and instincts take over, telling us we are ready for love. We can’t fight it; we have to respond to the urge. Soon more kittens are born.

When I was young, I was taken to the Cat Torturer, and he made a little change to my system so now I do not go into heat any more, and I do not have kittens. (I wish I could have had just one litter of kittens, but that wish cannot be granted now.) 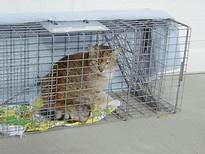 It is my understanding that, in this TNR program, feral and stray cats are trapped, taken to the Cat Torturer for the little system change he can make, and then they are returned to where they were found. As my wild cousins will not come willingly to have this procedure done, it is necessary to trap them. This process is so much better than rounding us up and killing us all.

I’ve learned that in the TNR program, when a cat goes through it, a tiny tip is cut off one of their ears.  It is sort of like a brand, so that if the cat is captured again, they will know he has already had the procedure.  Actually, that is a good idea.  I can see a cat being proud to show off his “mark” as a courageous cat who has been captured and then returned home.

After all, you two-leggeds have your own program. Though you don’t have to be trapped first, you go through the neuter and spay part. If the female two-legged doesn’t want to reproduce again, she goes to her clinic and her doctor spays her. Then she can have no more offspring. The male can do the same thing; he can go in and be neutered.

In the long run, the TNR process makes it so much easier for the mother cat, because then she doesn’t have to find food for herself and feed a new family as well. The male, now neutered, can’t come and harass her, and, in fact, now

that she no longer goes into heat, she doesn’t send out any signals to him, so he ignores her anyway. These are all good things.

I have learned that if a female two-legged does not want to reproduce, she can take something called “birth control pills.” Why doesn’t someone develop such a thing for cats? It could be put in our feed every day to keep us from wanting to make a new family. Wouldn’t that be more economical in the long run?

Of course, I understand that with a feral who has no regular feeding schedule, that technique would not be possible, but it might work for cats like me who live with a two-legged.

It is interesting to me that the cat world and the two-legged world, no matter how different, have some common problems. Some of the two-leggeds in the world have great difficulty finding enough to eat. As we know, many cats have the same trouble.

The number of cats in the world has grown until the numbers are staggering. The two-leggeds struggle with the same issues… Over-population, world hunger, and with the rise of the population, more diseases.

It is unfortunate that cats and two-leggeds cannot talk to each other, because perhaps solutions would be easier to find. However, I think the TNR is the kindest solution you two-leggeds have come up with. I hope more and more cities will take up this practice, and perhaps we can get the explosive cat population under control.

I did not get a chance to talk to a feral or stray cat, but if I did, first of all, I’d let them know that not all two-leggeds are evil, and that many of them are trying to help us. 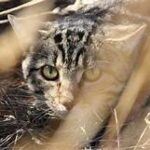 I would admonish cats who have a home to stay there unless it becomes totally unbearable. Then perhaps you have to leave, but hopefully, you can find another two-legged partner. It is very dangerous and difficult to be on your on in the world these days, especially if you are used to living soft in a two-legged habitat.

Remember, you have food every day and a warm, dry place to sleep. To many cats in this world today that is a life-giving blessing.

Thank you, KC, for this question. I hope that more and more communities will get in the TNR program, as we cannot deal with our problem by ourselves. Two-legged help may bring a solution that is acceptable for all of us.