The Geoffroy’s cat (Leopardus geoffroyi), about the same size as domestic cats, has the distinction of being the most widespread breed of wild cat found in South America. It is also among the earth’s smallest wildcats.

The coat of this small feline ranges in color dependent on its location. In the northern 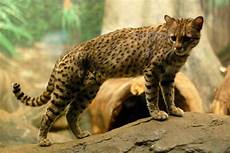 part of their range, the coat color is a brilliant ochre. In the south, it is silvery-grey. Colors may shade between these two, depending on where in the territory the cat lives.

Numerous small, round black dots, nearly all an equal size, are placed equal distances from one another. These black dots form a “necklace” on the animal’s chest. Also, several black streaks appear on the crown, with two on each cheek. Underparts, though a lighter color, also carry the markings of black dots.

The wildcat’s legs appear fairly stout; banded on the upper portion and with spots down to the toes. The cat has a black tip at the end of the tail. which measures about half the length of head and body. The tail also boasts several black rings.

Large ears have a rounded shape, colored black on the outside and flagged with white central spots. The cat’s irises are anywhere from a deep gold to a greenish-grey.

In the northern areas, one can find a melanistic Geoffroy’s cat. This cat has a black coat with black spots, and no white on the ears. The melanistic cat can be found in areas of dense forest.

Hunted For Their Fur

The coat camouflage furnishes needed protection, as this cat carries the doubtful distinction of being hunted for its fur. It has minimal predators among the animal kingdom, but trappers hunted these cats, trading as many as 150,000 pelts in a year.

Fortunately, the cats have now become protected by laws restricting the sale of pelts and the capturing of the animal for the pet trade.

Where Are They Found?

Distribution of Geoffroy’s cat covers a wide area. You can find this cat in the Andes of southern Bolivia, southern Brazil, Paraguay, Argentina, Uruguay, and southern Chile. The cat has been found up to elevations of 3,800 meters in the Bolivian Andes.

This cat lives in a variety of habitats, but prefers areas with dense vegetation. It lives mostly in an arid to semi-arid range. Find it in pampas or marsh grasslands, broad-leafed forests, savannas, dry shrublands, and woodlands or semi-desert uplands in pristine and disturbed areas.

Though the cat occupies a variety of habitats, it will avoid the areas where one finds the Ocelot. Because they are considered a predatory threat, the Geoffroy’s cat will stay out of the Ocelot area as much as possible. For its own protection, it avoids open areas.

Geoffroy’s cats climb well and spend part of their time in trees. However, they spend most of their time on the ground. They can swim well, and local people have called them “fishing cats.”

Hunting occurs mainly on the ground; however, the cat tends to feed on whatever is most abundant. In the water, they hunt for fish or frogs. If hares populate the area, they might well be the Geffroy’s cat’s dinner.

The hares, a larger size than many of the cat’s prey, became a popular food in winter, because one hare lasts longer than the small creatures the cat hunted.

Though these cats are mostly nocturnal, they often become active at dawn and dusk, and during the night as well.

The mother cat finds a well-protected den between rocks or perhaps in dense shrubs. The pregnancy lasts approximately 72-78 days, and litters number between one to four kittens. These kittens become weaned in about 8 to 10 weeks. Females reach sexual maturity at around 18 months; males at about 24 months. Kitttens tend to develop slowly. The cat can live up to 18 years.

Since trappers can no longer hunt these cats, one of its biggest dangers has been removed, or at least severely curtailed. Capturing them for the pet market has also not been encouraged. However, besides humans, the cat has other threats. 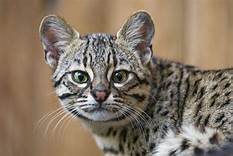 They may be killed by dogs, or by vehicles on the road. Angry farmers might retaliate if the cat kills poultry. Their habitat keeps shrinking. Sometimes they are captured illegally and bred with domestic cats to produce hybrid pets. They also risk exposure to diseases of domestic carnivores.

The life of a wild animal can never be considered easy. However, with new hunting and trading laws, they lose one danger. So far the cat’s status is not exactly known, but it has not made it to the endangered list.

How Geoffroy’s Cat Got Its Name

Geoffroy’s cat took its name from Geoffroy St Hilaire, a 19th century French naturalist who worked in the field of evolutionary theory. While in South America, he encountered the cat that now bears his name.

This animal has some unusual habits, not common in cats. First of all, as mentioned earlier, the cat actually swims regularly and does a good job of it. Fast-flowing water does not stop such activity. If he wants fish for supper, he will have to catch one.

Another unusual habit: The cat likes to get up on its back legs so it can scan the surrounding area. For this scouting movement, the cat uses its tail to support it. 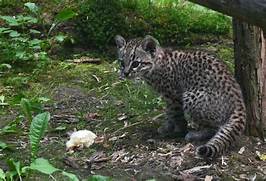 The cat goes to great lengths to find food, hunting in trees, in the water, and on the ground… A resourceful animal.

The cat is very agile, having the ability to walk along the underside of tree branches. How strange that must look!

Here are the references I used concerning this interesting cat: