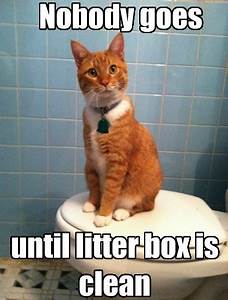 Hello, two-leggeds. Lucinda the literate cat is here, with another edition of cat behavior solutions.

This week I will tackle the problem of inappropriate bathroom issues. Why do some cats refuse to use their litter box? What are the reasons for this behavior?

Our first letter comes from a Mrs. Dempsey, who has asked for an answer to her problem.

My cat has stopped using his litter box, and I can’t understand it. He has a covered box, as I thought he’d like the privacy, but now he won’t go in there. Instead, he finds a spot on the floor or the rug.

It is important that you figure out why your cat is behaving in such a way. To help you figure out why he is not using his box, it would be worth a trip to the vet to see if he has some physical problem, such as a UTI. He might be in pain for some reason, and associates the box with the pain.

If you have other cats, he may be dealing with a territory issue with one of them.

All of my cat cousins are very prone to stress.  Any number of factors can contribute to our stress, such as changes in our environment or to our daily routine.  An unknown cat seen through the window can trigger a stress attack.

This stress can lead to unacceptable behavior, because in our anxiety we try to communicate our unease. If your cat is anxious, you will just make matters worse if you punish him.  Don’t let your rage get the best of you.  Don’t swat the cat or rub his nose in the soiled spot.  You will confuse him.

He is taking care of a problem that he has in his own way.  You need to provide him with an alternative solution.  The two of you need to figure out the cause of his problem.

The vet can rule out a number of possibilities for you, and he might also have some valuable suggestions. 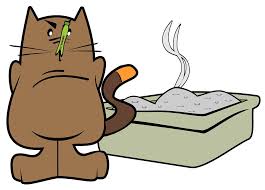 Do you keep the box clean? We cats like bathroom cleanliness, and if our box isn’t cleaned often enough, we don’t want to use it. Besides, it smells.

Try getting your cat a large cat box with no lid. The smell gets trapped in there, and we don’t want to go in a litter box when it stinks so much. We’d feel like we would get dirtier by using the box.

It is a good practice to have two cat boxes for your cat. Then, if one is dirty, he is more likely to use the second one than to use the floor or rug. If you have more than one cat, if you can, provide one box per cat plus one extra. If you keep these containers clean they will not smell.

If you change the box and the cat still will not use it, try this technique: Get a cage big enough for a litter box, a bed, and water. Keep the cat in there for three weeks, except during meals or when you are playing and cuddling him. Three weeks will be enough time to get him re-programmed to use his box.

My next letter is from a cat named Jenny who tells me that she does not like to use her covered box any more.

Lucinda, it always smells. My two-legged cleans it regularly, but at times I use it and there is no one around to clean it. Then it smells, and I don’t want to get back in there. I don’t think she would like using the bathroom if it smelled bad and had already been used.

Not only that, but a couple of times the dog has come in and nosed around in my box, eating cat turds. Yuck! I was scared to go in the box after that, because I thought I might get trapped in there. Can you tell my two-legged to take the lid off my box and clean it more often?”

Jenny, I understand your dilemma. If she would read this column, perhaps she’d understand why you are displeased with your bathroom accommodations. 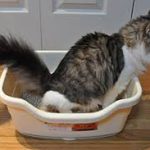 business. That spot might look fine to you, but she does not want you to use a place outside the box, and she does not like having to clean up your mess.

If she gets you a new litter box you must use it, or prepare for a more stringent solution. She will not allow you to continue your antisocial behavior.

With this response I conclude the fourth issue of the “Letters to Lucinda” column. I hope this information has been helpful for you.  If you have a particular issue you’d like me to discuss, please let me know in the comments below.