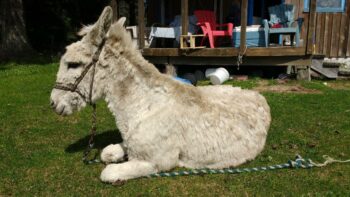 Hello, all.  Lucinda the literate cat here, with an unusual story.  My CCL (Cantankerous Cat Lady) took me to meet her friend, Kate Boesser.  Kate introduced me to two of her animal family:  Star, a black donkey, and Anna, a little white donkey.

Those two really scared me at first glance because they are so big, compared to me.  However, after we sniffed noses and got acquainted a bit, I realized them to be calm and friendly. They would not hurt me, unless they accidentally stepped on me.

Anna had heard that I wrote stories about animals for the CCL’s website.  She asked me if I could write a story about her, and some of her experiences. I said I’d be glad to try, so she spent a long time telling me of her adventures  It’s a good thing I have an excellent memory.  I went home and wrote the story.  The CCL took it to Kate to proof.

Now they have prepared it for the website, so you can enjoy it.  Here is the story of Anna, the little white donkey.

Let’s see.  How did I get here?  I’m actually Canadian, born and raised in Vernon, British Columbia. I am white as snow, small in stature. I was loved, trained to carry small children, which I did quite well.

But when those children grew up and moved on to larger animals’ backs, they forgot me.  Thank heavens I held onto that early love.  It has served me well, now that I’m middle-aged (20 years coming up soon), sort of pudgy in the middle, yet still hoping to be ridden, walked to green pastures, such as they may be, given the weather here at times.

One merciless day eight years ago, I journeyed through the far reaches of Canada.  Now and then we’d stop and offload one traveling companion, then another until only I remained.  I felt let down and lonely, I have to tell you.  Finally we careened down some crazy switchbacks into Alaska, and the door opened for the last time.  I sucked in my tummy, straightened my slightly heavy neck crest, put on my best face, and backed out onto a dirt road.

There stood Kate, my new owner.  She did not seem very educated on the fine elements of the donkey, and wondered aloud about my “fatty” crest, my fine upturned nostrils, the slightness of my great tail, and the beautiful bulging of my glorious eyes. I think I overwhelmed her, in a good way.

Mercifully only one night there, then back into a small one-donkey trailer and onto a ferry, across the seas to Juneau town, then walking endlessly, waiting for calming of the seas, whatever that meant.  I wish I hadn’t had to find out.

They lured me with carrots down a hard ramp, then through salty, squishy, slippery strands of wet vegetation threaded with pebbles and little creatures, into the icy water and close to a metal walkway, slamming continuously onto the rocks.

They wanted me to step willingly onto this boat structure, but boy, did I give them the time of their lives in my regal fashion, my passion matching their cajoling moment by moment, I’m proud to tell you.  I had no intention of stepping up willingly onto this landing craft. 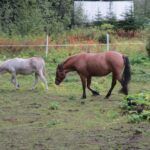 Then I endured endless rocking, waiting, then finally moving on and landing firm, being unlocked from the box and taken ashore.  I pranced, kicked a bit, headed off and away from the awful sea, with Kate struggling to keep up with my fine trot.  Down a road, into some trees, and into a small pasture of grass across from – look at that – a young filly and her mama horse.

The strange thing about horses is their inability to accept other equines at face value – I mean at quality donkey-face value here!  That filly and mama just had conniption fits over my being so close to them.

We spoke back and forth for weeks across the fence separating our pastures, outwardly so that Kate could hear, and without sound which proved a lot more successful, until finally we touched noses over and through the fence.  It was about time!

Kate finally allowed me entry to the larger pasture one fine day, where we could all smell each 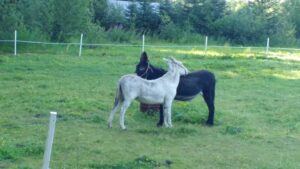 other, chase each other, show our stuff so to speak.  A real improvement in my living situation, I continually hollered to Kate and all others who would listen.

Then, who could imagine, but one day a horrible and telling thing happened.  The Mama horse had not been well for the four months I’d known her.  Her feet were real bad, and she had fainting spells.  Doctors came and went, looked at her, even had her stand on a box which told Kate that she was irreparable, so I gathered.

This bad day, they tied each of us up, they enclosed the filly named Freya by an electric line, and moved mama to the far corner of the pasture.  BANG!! Then mama was felled, immediately pushed by a monster truck into a hole and covered with dirt.

Little Freya screamed and lunged THROUGH that impossibly-thick fence to scramble towards the spot where her mother had disappeared.  It all happened so fast, out of the blue.  Then Freya continued to moan and call, circling me endlessly.  Like I had become all she had left in the world.

Kate gave no help at all. She was crying, watching.  At odds with what else to do, with little Freya at my side, I walked out into the opposite open field under the sun.

I turned to the North, and hee-hawed my loudest, then turned and did that again to the East, to the South, then to the West — the direction of one’s leaving, as had been taught to me so long ago by my own mother.  I told Freya, “Look, she’s gone.  She’s not in this direction, or this, or this, or even that.

You’re still here, and so am I.  And I will do my very best for you from now on.  So come on, let’s continue to live, to the best we can.  This is life and death, love.  This is our life now.”

Damned if that little one didn’t take to me, a donkey woman indeed, as her nanny.  She slept with me, grew up to and beyond me, listened to me, showed me her best and her worst as she grew up into a real live horse, standing with the likes of me and nickering, neck to neck, each evening in the sun and the rain and the sleet and the snow.  We made it together, we did.

Freya even learned painfully slowly to get over that first episode of being tied against her will, so that she agreed, dreadfully late as far as humans were concerned, to have a halter and bridle put upon her. One day as she lay asleep, I saw Kate get gently onto her back.  Freya awoke and stood up, and from that day on she has being ridden by Kate and others, and by little children.

Kate trained me to pull a small two-wheeled cart, which felt awfully confining at first, but got me out of the pasture, with little Freya coming along for the fun, so she too could learn to pull first this small cart, then one day a larger fine wagon all in red with a red top.  She turned out just fine. Then one day Kate sold her to the teen-aged girls that kept coming over to see her, to brush her, to ride away one day for good. 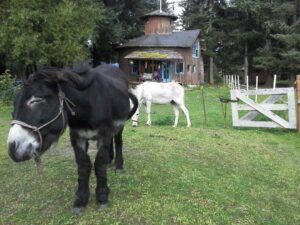 I was sad and lonely, but not for long.  One day another donkey, this time a black mammoth one – really, that’s what they’re called, newly named Star, came into the pasture with me.  Star arrived on a ferry to Juneau, where Kate apparently again was flabbergasted by the sight of her, just as she had been by me.  Star appeared a giantess compared to me.  My god, those ears.  Kind of overkill compared to my own, I must say.

I’ve heard Kate say how she lifted first one, then another foot of that girl, Star, and thought – oh, no, bad feet here!  When over her shoulder the seller man said quietly to her, “You’re an angel.”  Angel or no, she fell quickly in love with the big black girl, so it’s told, just like she had with me I know.

Star traveled by ferry to Gustavus.  Lucky girl!  Not nearly as inglorious as me in my box on the open waves –but hey, I’ve got a better story to tell, don’t I?

I enjoyed meeting Star, though she had a bit of an attitude upon meeting me.. At first she had to assert her largeness, I guess, with weeks of kicking, running at and around me, nipping, and laughing at my perfectly correct stature.  I had to stand tall and let it run off my fine sides, I tell you.  We wedged closer to each other as time passed, and now we are mostly true friends.

I have had to let her be the alpha female in all things, which is my only concession.  I get fed second.  I stand outside if hay is inside on the open loafing shed floor but within reach.  My call is not as loud, not as obnoxious as hers.  But I came first. I am chosen first to be ridden.  And I am proud to say my feet have held up, which is more than I can say for my poor partner, Star.

Kate can never ride either of us, though she’s tried her best to clip and clean and wrestle with that darn Star to get her feet less than nasty.  Star hasn’t foundered, we all know, but she stumbles and 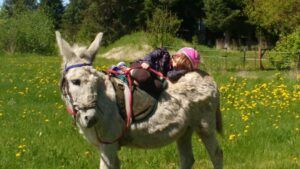 one hoof is slightly bent under, with an unrepairable open cleft where it should be smooth, like mine.  I’ll try to be humble here, but my feet are the best.

My life is giving rides to Kate’s grandchildren and their friends.  I follow my alpha friend, Star. I step slowly and carefully, not minding traffic or other animals, getting loving words lavished upon me, thanks to my fine breeding and careful attention to child-carrying detail.

I have only one concern at present.  I want to tell those pesky wild animals out there to leave me alone! They attacked me last summer, but just ask the lone wolf seen dragging his hind end up Wilson Road how good I am with my hooves!  Live and let live, I say.  And take care, my friends. 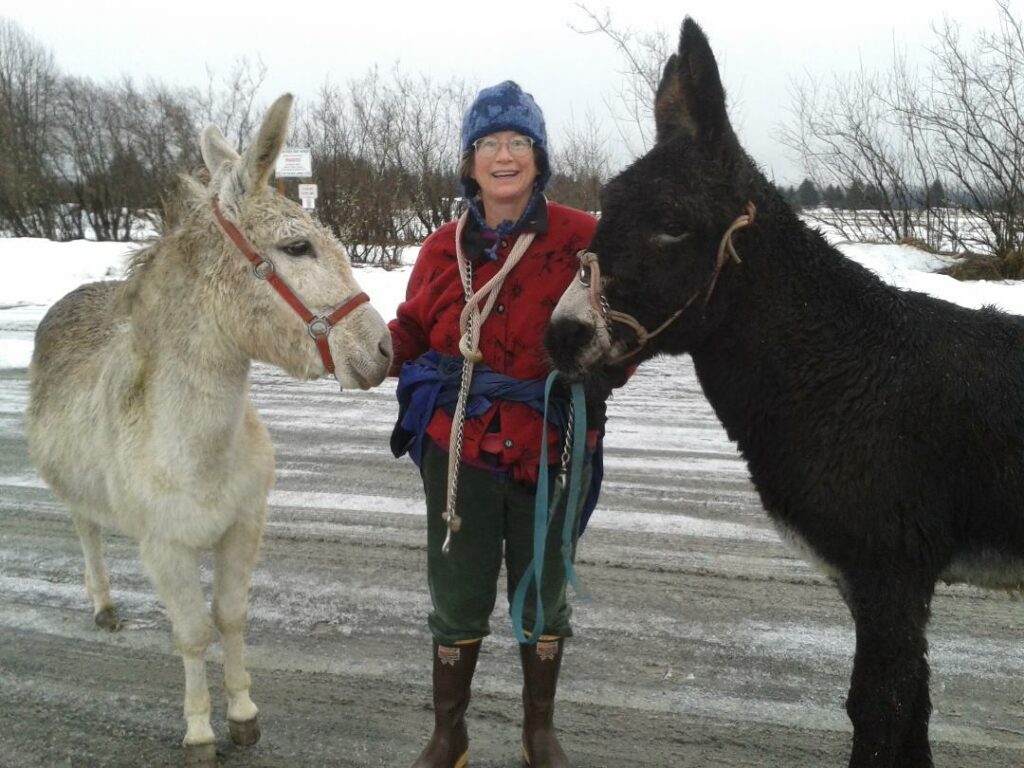