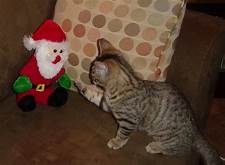 Hello, readers, from Lucinda, your literate cat. My CCL (Cantankerous Cat Lady) has asked me to write a post called “Christmas From The Cat’s Point Of View,” just to let you know what we cats think of your Christmas holiday.

First of all, “holiday” is not a cat idea. We are not inclined to take a holiday. That’s not to say we don’t have fun and play when we can, but we do not set aside certain days to be celebrated as special in some way.

This particular holiday is both a religious holiday and a time for giving gifts. As for the gift part, here we cats benefit, because very often we, as a family member, will receive a gift, even though we haven’t given any ourselves.

We can usually count on special treats, too, as our two-leggeds often share a bit of the Christmas meal. I do love turkey, so am happy when they share part of their meal.

What Is The Meaning Of Religion?

As for religion, I had to learn the meaning of this word, as we cats do not have a religion as such. We believe certain things to be true, but we do not place faith in a higher power as the two-leggeds do.

It is interesting that two-leggeds worship, or give allegiance to some unseen force that they call “God.” Though we are aware of this force, we do not follow its commandments or pay regular 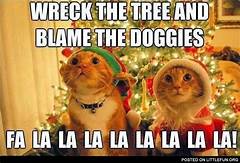 homage. Now, a dog has a god, but it is usually his two-legged master. He worships this being and hastens to do his bidding whenever possible.

However, the dog does not look beyond his two-legged to worship some unseen Being. He lets the two-legged take care of this higher power, while he worships only the being he can see.

Because we cats consider ourselves as equals to two-leggeds, there is no need for us to worship one of them. Instead, our instinct perhaps comes closest to being our religious beliefs. We let our instincts be our guides, and they offer helpful guidelines.

I do think religion and religious holidays help the two-leggeds. They are so emotional and can develop so many harmful ideas, that it is good that they have religion. It gives a book of rules that can bring about peace and transformation, if the two-leggeds heed them.

Sometimes religion is just not enough. These two-leggeds are perhaps unfortunate to have so many options in their lives — so many possibilities for right action. Some mortals escape their boundaries of goodness and do a great deal of harm to themselves and others by becoming involved in wrong action.

Still, they are remarkable. Though I am glad my life is so simple, I can marvel at the many ways two-leggeds can complicate theirs. Compared to us, they have a huge brain, and that lends itself to giving them more ways to get in trouble.

Why Do They Have A Christmas Tree?

Okay, another tradition related to Christmas that completely baffles me. They go out into the woods, 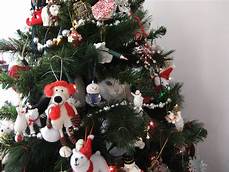 cut down a live evergreen tree, bring it inside, and put it in a stand so it will look like it is planted in the house.

It’s wonderful! When I saw my first Christmas tree, I felt such joy — I thought my family had brought that tree in just for me to climb and play in, so I immediately ran to it and climbed up into its middle, where I could look out at the room.

To my surprise, they scolded me and chased me out of the tree. Why? I tried again, a couple of times, until the CCL put her noisy machine called a vacuum cleaner around the tree. Every time I’d get close to the tree, she”d turn on that contraption. I got the message.

What came next proved to be even more exciting. They brought out these sparkly, shiny balls and other cute miniatures of toys and animals and began hanging them all over that tree. They even put on colored lights that lit the whole tree up so beautifully.

CCL was even more emphatic now about not getting close to that tree. Why? They didn’t even play with all those lovely bright things themselves. How sad is that? They just looked at them. My paws itched to knock one of those balls off there and chase it around.

Such behavior would not be accepted. It’s just not fair — They bring in this lovely tree and put all these magnificent toys on it, and won’t let us touch it. I still can’t quite understand.

I think that if they want a tree like that, fine. But then they should bring in a second tree and stand it up and let us play in that one just as much as we want. Then I would certainly get more enthusiastic 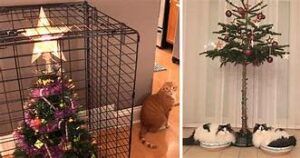 about this whole Christmas idea

My CCL wrote a post last year in which she described many ways she’d found from research or from asking others on how to keep us cats out of the Christmas tree. If you are looking for such suggestions, use this link to travel there and read it.

I Do Enjoy Christmas Carols

Though I disapprove of the two-leggeds setting up a tree that is obviously a cat’s dream of heaven and then not permitting us to play with it, I do approve of Christmas carols. I love the two-leggeds’ music — it reminds me of times I’d get together with a friend or two and sing in harmony.

You two-leggeds don’t get it, do you? You think we are just getting ready to get in a fight, but at times we just want to join voices in a song. Why, I have even heard of two-leggeds pouring a bucket of water over the singers. Such an action can make you mad, even if you weren’t before.

Let me ask you this: Would you like it if you were singing with friends and someone poured a bucket of water on you? You would then be very mad, and since you often have the words to your songs written on a piece of paper, the water would ruin them. Then how would you feel?

Wisdom Is As Wisdom Does (Two-Legged Saying)

One thing I’ve noticed is that the two-leggeds, for all their supposed wisdom, are often blind to the effect their actions have on other creatures. Because they are so smart, they think their way has to be the best way for all, and they look no further. We creatures with smaller brains often suffer for what I can only call arrogance and wrong-doing.

I digress a bit from Christmas. I do feel their holiday does a small bit of good. For a short time each year, the two-leggeds are nicer to each other and often nicer to us as well. It’s too bad they can’t find a way to help this good will on their part to extend to cover the entire year.

So now I say to you what no cat has ever said to a two-legged before: May you have a merry Christmas, and may you carry the spirit of the holiday in your heart all year. It would make the world a better place. 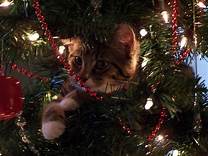 14 thoughts on “Christmas From The Cat’s Point Of View”