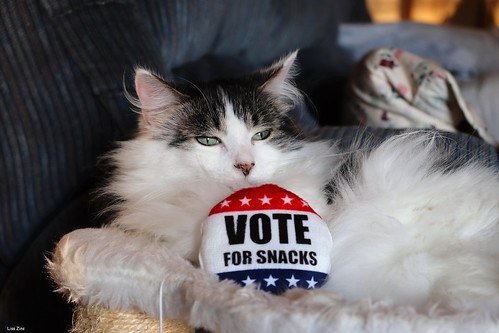 For almost 12 years, we’ve seen no First Cat in the White House. Now, the Bidens will answer that lack, bringing in a First Cat to act as rodent control and to add the essence of cat personality to the White House atmosphere.

Several former presidents have introduced a cat to the White House staff. They do provide a valuable function by keeping the rodent population diminished in the building. It also adds a “homey” touch to the place.

Pets in the White House proved quite common, as at times the place has seemed like a bit of a zoo. Several horses made their way to the place, as well as other farm animals. Woodrow Wilson kept a flock of sheep that had the job of providing a trim to the White House lawn. John F. Kennedy’s daughter, Caroline, owned a small fleet of ducks and a pony. William Howard Taft kept a Holstein cow to provide fresh milk.

Theodore Roosevelt kept a variety of animals around, mostly for the benefit of his children. As an example, at one time the place housed a small bear named Jonathan Edwards.

Other presidents or their families owned a variety of different pets. But what about the cats? Well, several of our presidents have included cats among the White House residents. Here’s the list, not necessarily in order.

Abraham Lincoln, known as an avid cat lover, brought two cats, Tabby and Dixie, to the White House. Because of his love of cats, he also brought in strays. I don’t believe any other president has done so, at least in quantity, and I do commend such actions.

Moving forward many years, we learn about Socks the Cat, First Pet of Bill and

Hillary Clinton. He became quite well-known in circles who follow such news.

Socks had a dazzling change of lifestyle when he became First Cat. The Clintons adopted him, giving a distinguished home to a stray. He made a name for himself during his time as America’s First Cat.

After the Clintons left the White House, Socks moved in with former Clinton secretary, Betty Currie and her husband, as Socks had continuing conflicts with the Clinton’s dog, Buddy.

Rutherford Hayes brought the first Siamese into the White House. The family named him Siam.

Siam became just one of many animals who roamed the White House during Hayes’ time. The menagerie also included a goat, a mockingbird, cows, and many dogs.

Tige shared a home with other cats, big and small, during the presidency of Calvin Coolidge. The Coolidges did not limit themselves to just one cat, but had several, from kittens to fully grown cats.

The Coolidge family had four house cats, named Bounder, Tiger, Mud, and Blacky. Supposedly they also had a bobcat and two lion cubs. The latter arrived as gifts from dignitaries in South Africa. These two had unusual names — Tax Reduction and Budget Bureau.

Tiger, a tabby cat, called Tige by those who knew him, lived in this White House zoo, sharing with dogs, three other cats, and a raccoon. Other animals shared the space as well. It’s a good thing there’s lots of room at the White house. At least, the cat did not become lonesome.

It appears that President Theodore Roosevelt wins the award for having the most pets during his White House residency. The impressive count for their large family of animals comes to 23 different pets. A list of these animals appears earlier in this story.

Slippers had the unique distinction of being a six-toed cat. Slippers shared the honors of First Cat with Tom Quartz, said to have gained his name from a character in Mark Twain’s “Roughing It.”

These two cats shared the White House during Woodrow Wilson’s presidency. Mittens and Puffins, however, didn’t win the title of most famous of Wilson’s pets.

That title went to Old Ike, the president’s ram. Old Ike did his best to keep the White House lawn in trim.

Because the president had allergies to the cat, it spent most of its time living with Mary Gallagher, a White House staffer. Caroline could visit and play with her kitty friend whenever she wanted.

This cat enjoys the reputation of being the second Siamese in the White House, moving in when Gerald Ford took office.

The cat actually belonged to Ford’s daughter, Susan. She received Shan as an Easter present long before her father became president.

Here’s another Siamese who has lived in the White House. This cat belonged to Jimmy Carter’s daughter, Amy.

This creative name inspired a song by that name, an instrumental track created by  Gabor Szabo. With such a name, it is no wonder it inspired the writing of music in its honor.

India, a black cat, also had the nickname of Willie. George W. Bush adopted this cat for his young daughters. She lived with the Bush family for almost two decades, dying

just weeks before the Obamas moved in.

India provided amusement to visitors, a popular figure often found romping around the White House and its grounds.

It’s good to have a cat in the White House. I hope I’ve mentioned all the First Cats. If I have missed one, please let me know and I will add the name to this list.

I’m looking forward to learning more about the cat that Bidens introduce as the next First Cat. Kitty, our country needs you.

References I used for this post include the following:

2 thoughts on “Soon, A New First Cat In The White House”