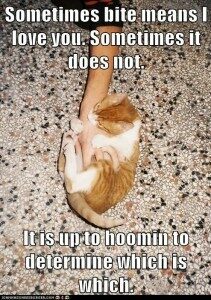 Why do cats bite their owners? What causes this aggressiveness? Know that such responses relate to the cat’s innate behavior. It serves as a normal part of a cat’s response to his surroundings, whether related to predation, play, or social conflict.

Please be aware that aggression is not a temperament trait or a diagnosis. Rather, it’s a consequence of the cat’s emotional state. It can be related to genetics and former experiences, lack of socialization, fear, or social conflict. First, determine the cause and then work to change the behavior.

We can find several reasons why a cat bites people. Let’s discuss these:

The cat received improper socialization as a kitten. When a kitten still lives with his mother, if mock fights with his siblings become too rough, mom usually steps in and stops the fight. She thus teaches the kitten some bite inhibition.

Play fighting teaches kittens how to deal with prey. If a human attempts a similar type of play, using hands or feet, it reinforces this excitable behavior in the kitten. These kittens grow into adult cats who pounce on hands and feet when they wish play or attention.

If the mother has not had a chance to teach the kitten not to play too rough, he will continue as an adult when his claws and teeth can do a lot more damage, Then it becomes necessary to retrain kitty to eliminate this behavior.

Petting can cause aggressive behavior. If you pet the cat in the wrong place, he may feel vulnerable and react with claw or bite. Belly, chest, or back can bring on this behavior. The cat becomes overstimulated or agitated, and feels the need to strike back.

Some cats just become less tolerant of petting as they mature socially. Avoid this behavior by engaging only in short petting sessions or giving your cat attention in a different way.

Redirected hostility. Perhaps your cat sees a rival cat through the window, and would sincerely love to beat up that cat. If you, the owner, are present, because of the strong and stressful stimulus, the cat may redirect his hostility, either toward you or another cat.

Trying to handle your cat during such a time might result in a serious injury. Back off and let him settle down before trying to interact with him.

Kitty is sick or in pain. Sometimes the reason for hostile behavior stems from some physical problem. Perhaps your touch causes pain. Perhaps kitty has some painful condition, such as dental disease or a wound or injury. In such cases, seek veterinary assistance immediately.

Fear or anxiety. Changes in routine or living conditions can cause a cat to become scared or anxious. If kitty feels threatened, he might attack. A new pet or person in the home or a major move or decorating project might upset him to the point of triggering aggression.

Watch for defensive attitudes in the cat, but don’t try to comfort or calm him. Wait until he comes to you and have treats ready to help him understand that all is well.

Biting as a form of communication. If a cat wants attention, or perhaps to be fed, he may bite because he has found such an action brings him what he wants. Don’t give in to him, but try to break this association. You do not want to reward kitty with what he wants after he bites you.

I can give one example, however, where giving the cat what he wanted solved the problem. Friends were visiting, and we sat around the table, talking. My cat, Carlos, sat in front of me and stared at me, and I realized it was 4:00 and his dinner-time.

One of my friends had taken her sandals off when she came in, and her feet were bare. When Carlos got no response from me, he went under the table and bit my friend’s toe. “Oh, Carlos wants his dinner,” she said. I fed him and he never used that behavior again. Lucky me…

How Can You Stop Or Prevent Cat Biting?

Here are some things you can do to address this problem. With attention, patience, and consistency, you can retrain your cat to change this behavior.

Do not entice your kitten to play with fingers or toes, as you might just start a habit you don’t want your kitten to have. They should learn that hands and feet are off-limits when it comes to biting. Instead, offer your kitten some substitute toy that’s acceptable for play.

Right after playtime, you might avoid stroking or picking up the kitten, as it might unintentionally encourage the baby to think the hands are toys. If the kitten keeps up the behavior, try blowing sharply though gently in kitty’s face.

Expose the kitten to short sessions of gentle, positive body handling. Find out where the baby likes stroking, and concentrate on those areas. If kitty becomes agitated, back off until he is calm again. Reward with treats for positive behavior.

Let the kitten meet a variety of visitors. Get him used to grooming. Expose him to as many situations that require an adjustment to something new to help enrich his environment.

If your cat wants to resort to aggressive behavior, as soon as it starts. simply leave the room. Do not shout or punish, as that could worsen the problem. Simply remove yourself from the equation. If you do so, you will make the point that what he is doing is not acceptable to you.

Then, stop making any contact with him until he has calmed down. It might become necessary to place the cat in a quiet, dark room by himself until he returns to normal. Give your cat the choice as to when he wants interaction and for how long.

Give him food puzzles or games to satisfy his predatory instincts

Kitty needs to recreate the hunting behavior, especially if he’s an indoor cat, just to satisfy his natural instincts. Use a variety of puzzles or games to do so. Wand toys make great ways to create a mock hunt that allows the cat to stalk and “capture” his prey.

My cat, Mocha, gives me the opportunity to deal with and try to solve an aggression problem. It’s been a challenge, as he was 3 1/2 years old when I got him, with habits already pretty ingrained. Retraining him has not been easy. We’re still working on the problem, but making progress.

He started as a feral, and found a home with a man who did not try to socialize him. Instead, his owner resorted to playing rough with him, causing the poor cat to believe that aggressive interaction was a suitable form of play.

I discovered this behavior the first morning after Mocha came to live with me. We awoke, and I reached over to give him a morning pet. He immediately attacked my hand with all four feet and his teeth. He apparently thought I’d invited this behavior, as his attack was exuberant and playful.,

He used his claws sparingly, but he bit with full force. I knew he’d have to learn to stop this behavior. I still feel a little sorry for him, as he seems disappointed that I will not play in this way. However, after one rather serious bite, I was having none of it.

My usual response to his bites has been to walk away, or to pointedly ignore him. A couple of times I pushed him off the bed. With consistency, I’ve managed to modify his behavior. He still wants to bite once in a while, but now in the morning, he doesn’t try to greet me that way.

Instead, he just jumps off the bed, sometimes with a little chirrup and sometimes silently. If he wants attention in the morning, he will walk up close to my head and I’ll pet him for a little while and scratch his cheeks. Then he leaves.

Some things probably will never change. He doesn’t like brushing, but he’s semi-longhaired, and needs it. I wear gloves. If things get too bad, I’ll use a lickable treat while I brush him, and that settles him down. He loves the “lickables.”

I don’t know if he will become more cuddly as he gets older, but at least most of the aggressive behavior has stopped.

I hope you have found some encouragement here and can find a way to stop aggressive behavior if your kitty demonstrates it. It is not always easy, but it can make life with your pet much more pleasant.

Try to understand your cat and figure out why he’s acting aggressive. Often, when you discover the reason, you can also find a solution. Don’t punish; don’t scold; don’t give up on him. He needs to learn how to behave in the human world he’s now inhabiting.