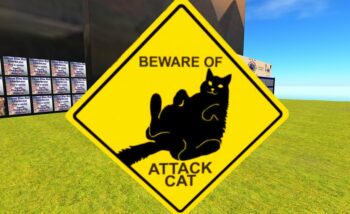 Have you ever had a cat who bites? Do you know the reasons behind his behavior? And, the big question, have you learned how to stop your cat from biting?

My new cat is a biter. He’s four and a half years old, so he does not have the excuse of still being a kitten and not knowing better. So, this post comes about as much to help me learn how to deal with the problem as to provide you with useful information.

However, perhaps you deal with the same problem or a similar one and would like to know how to solve it. The following information will tell you what I have learned.

First, Identify The Cause

The numerous reasons for cats biting can create the need for different strategies to teach them to quit.

Did they start this behavior as kittens? Often young kittens will bite hands and anything else in reach because they have itchy teeth. They lose all of their baby teeth by six to nine months old. Before they lose them, the biting stage will continue full-force.

Once they have lost all their baby teeth and new ones have grown in, their biting stage should stop. However, if they have become accustomed to playing with hands and fingers and biting them, you may now have to help them unlearn this tendency.

Distract them with a toy they can chew on. Don’t punish them — they only practice skills to help them learn how to hunt. Just don’t let them bite. Such actions are not acceptable.

How Would You Rate Kitty On Health?

A very common reason for a cat to bite could have something to do with his general health. If your cat has never shown signs of aggression and suddenly begins to bite and scratch, he may mean to show you that he hurts.

Pay attention to when the cat bites. Does it occur when you touch them somewhere that has caused no reaction in the past? That might give a clue.

For example, if he bites when you touch his cheek, he may have a dental problem. If he attacks when you rub his tummy and he’s allowed such rubbing before, he may have constipation or a tummy ache.

Perhaps He’s Had Too Much Petting

If your cat goes from friendly and relaxed to aggressive, she may just want to tell you that she’s had enough attention for a while.

If your cat nips you in the midst of a cuddle, don’t take it personally. Kitty just wants you to know it’s time to back off and give her some alone time. You can resume your cuddle later.

Sometimes a cat will bite when the attention stops, as a way of letting you know he wants more. Or, perhaps you ignore him and he will give you a bite as a way to remind you he needs some attention from you and you’ve been too busy to stop and give him some.

Rather than punishing your cat for bad behavior, reward him when he does something good. Encourage him to play gently by offering treats or petting.

What If The Cat Bites And Won’t Let Go?

First of all, don’t pull your hand away. To the cat, this pulling away seems like prey trying to get away, and he may attack even stronger.

Instead, push the cat away gently. As prey never moves toward him, the cat will become confused, and will release teeth and claws.

You might also try a loud nose. Try dropping something on the floor.

I have a friend who says when her cat bit, she’d yell, “Ouch” in a loud voice, and the surprised cat would let go.

When you learn what situations trigger aggression in kitty, do your best to avoid these situations.

I wish I knew Mocha’s story of his younger years. I’m pretty sure someone who had him for a time when he was quite young made it a habit of some rough-house playing with him, first thing in the morning.

When we first wake up, I have a natural tendency to pet the cat when I tell him good morning. I soon learned this practice did not work well with Mocha.

As soon as I’d reach to pet him, he’d attack my hand, using all four feet, and he’d bite, hard. When he drew blood on my arm one morning, leaving me a wound to attend to, I knew something had to be done to stop that behavior.

I asked my friend, Wendy Christensen, who wrote my favorite go-to cat book, Outsmarting Cats, She said, “as soon as he attacks, remove yourself from the scene.” (A bit hard to do when you have not yet gotten out of bed.) She also suggested that I not touch him in the morning as long as he had an aggressive reaction.

It seems to work. I talk to him lovingly. He tries to get me to move my hand into action, but I don’t do it. Thus, no attack.

I’ll only pet him when he asks nicely. Now, at times he will bump my hand with his nose. Then I stroke his head and scratch his cheeks, then remove the hand. Sometimes he asks again, with a nose bump. As long as he’s non-aggressive, we’re fine.

He’s mellowing, slowly. In time I think he’ll get over his desire to scratch my hand or clamp down on my arm. I do think it will take some time, but he’s improved already. Easy does it!

One more topic I want to discuss: children. They need to learn the proper way to interact with the cat. The must learn not to handle the cat roughly or to chase him until he feels cornered. Sometimes just being kids — running around, making considerable nose, may stress the cat. Make sure he has a safe place to hide so he doesn’t become aggressive and feel like biting.

Kids and other visitors need to understand that the cat has his own safe place, and if he goes there, he’s not to be disturbed.

What Are “Back Off” Behavior Signs In The Cat?

Often the cat tries to warn the person that they are about to bite. What is kitty’s body language? Is the tail thrashing, ears pinned back, pupils dilated? Is he hissing or growling? Hair standing up on his back; whiskers facing forward?

It’s good to know, too, that if your cat has been declawed, he will be more apt to bite.

Observe all signals and be warned. It’s time to walk away and give the cat some cool-down time. His anxiety level is way too high to tolerate any interaction. Later, gator.

Whatever the reason for your cat’s biting behavior, you must find a way to stop it. Defuse it; walk away from it; give the cat an alternative, such as a toy to chew on.

He must learn that such behavior is unacceptable. Remember — distract kitty with a more positive behavior, such as a toy to bite. Do not punish the cat for negative behavior, as he will not make the connection and will only learn not to trust you.

May you be blessed with a gentle, loving kitty.