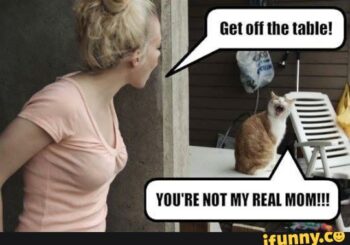 Ah, yes, we can come up with an assortment of human behaviors that will number in the list of things we do that cats hate. In my research, I’ve found that list to be pretty long, but for this post, will limit it to just twelve items. Perhaps you have already discovered other behaviors that you can add to this list.

1. Forced Socialization or Ignoring Them

Since your cat is a very independent creature, he does not appreciate it when you force him out of hiding to deal with visitors. A cat needs to have a safe place to hide if he does not want to deal with strange people or other animals.

Such actions will not only stress your cat, but will also erode trust. If kitty wants to hide, respect that wish. If the cat wishes to interact, he will come out on his own and visit. In fact, letting the cat decide when and if he wants to interact is the best method.

That doesn’t mean he wants you to ignore him. In fact, he may let you know by repeated vocalization that he expects some action from you. Try to discover what kind of attention he wants.

If you must work, your long absence may stress kitty, but, of course, if he wants his cat food, you have to work to pay for it. However, be aware that long periods of time away from the cat will most likely make him unhappy. Make up for it by allowing a block of time in your at-home schedule to spend with your feline friend. Playing will help.

2. Scolding or Punishing for Normal Behavior

Scolding your cat is not a good tactic. Instead, try to substitute a positive behavior for the negative one. Divert the cat from his wrongful action and find something acceptable for him to do. Positive reinforcement is key.

Reward your cat for right behavior. Never hit your cat or yell at it; keep your own negativity under control. You will not teach the cat anything, as he will not understand that he’s done something wrong. He will merely think you are at fault for treating him in such a disagreeable way.

Don’t spray him with water. It might eliminate the behavior at that moment, but it will not teach the cat to stop that behavior. He’ll merely wait and try when you are gone. However, he may become wary of you because you have sprayed him.

I have had personal experience with this one. When my neighbor cat in Kodiak came in our cat door every morning, at first I would water-spray him and he’d leave. However, he’d come back in a little later, because he wanted to be with my cat, whom he thought was his mentor.

I discontinued the spraying, but that cat never trusted me, and would not let me touch or pet him. He’d hiss or slap at me, but he still visited every day because he loved my cat, Carlos.

Cats love a routine. They love to know what to expect: Meals at the same time, order and habitual activities in their day. If you have to move, for example, or add a new baby or pet, the cat will have to adjust. The changes in his daily schedule will stress him until he acclimates.

Keep his daily routine as close to the same every day and he will find such repetition calming.

4. Not Cleaning the Litter Box

This one should be a no-brainer. Would you like it if you had to use a stinky toilet, full to near-overflowing with waste? Put yourself in the cat’s place: Would you like to scratch around in a box of sand that contained lots of lumps of poop and pee? Of course not! So clean the box regularly.

Once or twice a day will do. I clean my cat’s box every time I notice he’s used it. Thus far, we have had no outside-the-box accidents. As cats are notoriously clean animals, it’s pretty easy to understand why a dirty box offends them. Besides, its smell offends their sensitive noses.

5. Dressing Them in Clothes

Why would you do such a thing? Because you think it’s cute? The cat is supplied with all the “clothing” he needs. Not only that, but he spends hours each day washing it to keep it clean.

Besides, if you dress him in clothes, you inhibit his freedom of movement, and he will feel very stressed if he cannot move his body with no clothing hampering him.

I do believe that once in a while there are exceptions. Occasionally, a cat will enjoy the adventure of clothing. Have you read “A Cat’s Tale”, by Paul Koudounaris, as dictated to him by Baba, his cat? The book is a thorough history of cats through the ages.

Multiple photographs accompany the book. Each one shows Baba dressed in another costume from that particular era of history. Some are quite elaborate, such as the Napoleon costume or the Cardinal Richelieu one.

I asked Paul how he got the cat to wear all those costumes — What kind of treats or temptations did he use? He said he used none — The cat actually enjoyed their photo shoots, I believe because, for Baba, the whole process was a wonderful way to bond tightly with her owner.

However, I believe that for the most part, dressing your cat in clothes constitutes a very selfish wish on your part because you think he’s so cute, and it doesn’t matter that the cat finds the whole thing disgusting. He’s a cat, not a little kid. He’s your fur baby, not your toy doll.

How would you like your fingers cut off at the first joint? Basically, when you allow your cat to be declawed, that’s what happens. It causes great pain and trauma for the cat; it may affect his gait later; it can certainly erode trust. Please don’t do it.

Instead, learn to clip his claws and get one or two good scratching posts. If need be, take him to your vet every couple of months and get those claws cut. Remember that it’s natural and necessary for him to scratch and this behavior needs to be allowed.

Do not bathe your cat unless it’s absolutely necessary. The cat has a tongue equipped with barbs that allow him to clean himself. He spends hours each day grooming, and very seldom needs any help from you. Besides, most cats hate being bathed, so why subject him to it?

When I lived in Kodiak, I had to bathe Loose Cat, my big black Kodiak alley cat, one time. He chased off an intruder from the back yard, running through a muddy swamp. When he came home, he was a covered-over mess. I had to bathe him in the bathtub.

He didn’t like it, though he seemed to realize it was necessary. That didn’t stop his vocal protest. While I washed, his voice started on a low yowl and gradually increased in pitch and volume, until the job was finished. I am very glad I only had to bathe him once!

8. Having a Covered Litter Box

Can you imagine being shut in the box with the smell of poop or pee? Cats have a very good sense of smell, much better than ours, and doing his constitutional in that enclosed, stinky place must not be fun. No wonder he goes outside the box!

My old cat, Pogo, had a covered box in his old residence, and started going outside the box regularly. They took him to the vet to see if he had a UTI. They couldn’t get him to stop the behavior. They told me he ruined four rugs.

Finally, they took him to the shelter. He was there for over 7 months before I realized he was still there. I brought him home immediately. I gave him a large, high-sided litter box with no cover. We never had a litter box issue. The outside-the-box routine never came into play.

Cats get stressed by what I call “loud, noisy things,” such as vacuums, vent fans, loud music or TV, fireworks, car horns. They also get stressed if the people in the house are shouting at each other. Their highly developed sense of hearing causes stress and anxiety when the noise level is high.

They can become quite fearful in such situations. Perhaps you, too, would feel less stressful if you atmosphere remains peaceful.

Your kitty is a little animal and as such needs to feel secure. Often, just creating a safe space where he can hide and be alone can be so helpful for him. Leave him to his space; don’t try to force him out of it or call him repeatedly. Give him a peaceful place! Don’t you need the same thing now and then?

In the wild, cats looked for a spot to hide so they could protect themselves from predators. Even though he’s in your home, his special spot can allow him to feel secure and relaxed. Studies indicate that cats with such a spot have remarkably lower stress levels than cats with no safe place.

A cat’s sense of smell is 14 times stronger than that of a human. Thus, many smells that don’t affect us can really make a difference to your cat. Such things as perfume, deodorants, household cleaning supplies, strong-smelling foods or chemicals should be avoided as much as possible.

Don’t use scented sprays on the cat’s bedding — that odor will not please kitty, and it will last for a long time. Keep the litter box clean, as a smelly box can lead the cat to look for another place to use.

Doesn’t kitty own the house? Then, why can’t he go in that spare room? Because he can’t get in there, he will become obsessed with going through that door.

My cat, Mocha, can go in every room except the pantry, my clothes closet, and the utility room off the bathroom. Those doors are always closed. Funny, how fast he can arrive on the scene if I open one of them.

He’s found places to crawl into in my closet and the pantry. He yearns to explore the utility room, where my water pump and pressure tank, the hot water heater, and the water softener are located. Cats just seem to find anyplace they can’t visit as a desirable destination.

As mentioned at the beginning, this is a partial list. There are others; perhaps you can think of some yourself. We can’t change our own routine or way of doing things simply to please the cat, but we can become aware of what things can stress or frighten him, and try to keep them at a minimum.

After all, a relaxed cat is a happy cat, and because his stress level is low, he will remain healthier as well.