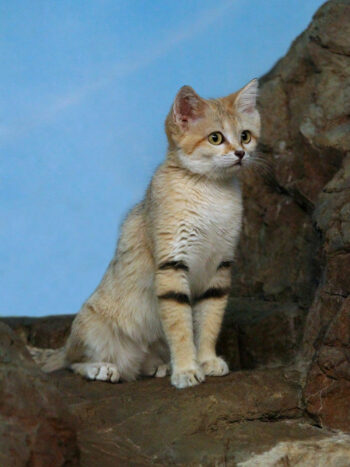 Are you acquainted with the sand cat? It’s one of the very smallest breeds of wild cats. Learn some sand cat facts here. The average size of the female is from three to seven pounds. The males aren’t much bigger, ranging from 4.5 to 7.5 pounds.

Its body, though is about the length of a house cat. ranging from 18 to 22.5 inches long (not including the tail.)

The reason they are called “sand cats” is because the sand cats lives only in extremely dry desert regions. You can find them in three specific regions: The Sahara Desert, Arabian Peninsula, and in certain parts of Central Asia.

His Reputation As A Hunter Well-Deserved

Though quite small, this cat can hunt with the best of them. Fearless when it comes to finding his next meal, he is a ferocious hunter. He even hunts snakes, and the snakes he kills can include venemous ones such as vipers.

In spite of his fierceness, he received a sweet Latin name — Felis margarita. He received his name to honor a French general. (I’m wondering if the man was a fearless warrior — it would be fitting.) The man’s name was Jean Auguste Margueritte.

It’s easy to understand the sand cat’s coloring…he is a pale tan or sandy color so he’ll match the sand of his environment. He has a few dark spots or stripes on his fur. The tail is tipped with black, and has a few black bands around it.

Two dark stripes mark their upper forelegs. The ears are quite large, which helps heat escape when the desert temperatures come into play. Those ears, set low on the sides of the head, help the cat detect prey that moves underground.

This cat’s large eyes are greenish-yellow, ringed with white, The noise is blackish. The belly can be a paler sandy color or white. The head is flat and wide, legs are short, and tail relatively long.

To protect the soles of its paws against the extreme heat or cold of the desert, long hair covers them, insluating the paw pads against the elements. Because they have so much fur on their footpads, they don’t leave footprints

The sand cat has become an expert at digging, and tunnels into the sand to create a burrow. Here, he rests during the heat of the day and comes out to hunt at night. Sometimes he uses a burrow left by another animal and not currently in use, saving the task of digging his own.

He can also hear prey moving under the sand, and due to his fine digging skills, can at times find his next meal by excavating to uncover it.

Because of the extreme heat of the day, these cats like to hunt at night. Though they are solitary, they are not highly territorial. Sometimes they can travel about 10 km (over six miles) in one night. If they have a good hunt that night and catch more than they can eat, they bury it in the sand for later.

When making their long hunting jaunts, this small cat keeps close to the ground. Perhaps the animal feels a bit safer moving in this way, as there aren’t many objects in the desert to hide behind.

However, the cat can run very quickly if the need arises. He is capable of sudden bursts of speed. At top speed, he might reach 30-40 km, or 19-25 miles per hour.

Water, of course, is quite scarce in the desert. However, the sand cat can go for long periods without drinking. They receive most of the moisture they need from the prey that they eat. At times, this cat will go months without drinking.

Though solitary at other times, of course during mating season, male and female meet. During the mating season, the hearing becomes very important, in order for a potential mate to fine them. Unlike a house cat, the sand cat doesn’t purr, hiss, or meow.

Instead, the mating call sounds more like a chihuahua bark than like a cat. Speculation tells us that this mating sound evolved because of the long distance sand cats live from each other. That louder, barking sound becomes more effective for alerting a possible mate.

The female searches for a mate during oestrus, which lasts from five to six days. During this time she will frequently call and scent mark.

Her gestation period is 59 to 66 days, and when she gives birth, the litter usually consists of two to three kittens. These little babies weigh only from 1.4 to 2.8 ounces at birth, and have spotted pale yellow or reddish fur.

The kitten reaches 3/4 of its adult size within five months and become totally independent by the end of their first year. Shortly after, they reach sexual maturity. In some areas, a sand cat will give birth to two litters per year.

Threats To The Sand Cat Population

As you can guess, the primary threat to this breed of small wild cat includes the destruction of habitat by humans and declining prey populations. They also represent an easy hunting target, as they are not aggressive toward humans and they sometimes sun themselves during the day on rocks.

Dogs and domestic and feral cats can pose a threat, as these may prey upon, compete with, or transmit diseases to the small feline.

On the list of threatened species, it is classified as Near Threatened.

This cat has been observed at night, when he closes his eyes when humans approach so that he cannot be spotted easily. This camouflaging technique helps him blend in with sand and darkness.

Can The Sand Cat Be Domesticated?

Now that you’ve read how they live, you might realize that these are very sensitive animals, and do not do well where their needs are not met. A few are living in captivity in zoos, who work to provide the environment they need. However, you won’t find any available for adoption.

Wild animals sometimes don’t lend themselves to becoming our companions. Actually, it’s rather nice to know that some of the wildness of the world will animals.net/sand-catremain the same. These cats have their place in their desert homes, and there they should remain.

However, it’s nice to learn about them and perhaps to join in the battle to keep them from becoming extinct. For starters, learning about them and their ways can help educate you to their existence and their needs. Isn’t it rather nice to know some creatures on our planet cannot be tamed?

2 thoughts on “Sand Cat Facts: Learn About This Small Yet Ferocious Breed”