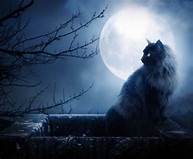 In the last post, we discussed some basic types of cat personalities. Perhaps you have found a good description of your cat in one of those basic types. However, very often, a cat will represent a mix of breeds, thus giving the chance for variations of the personality pattern as well. So, how is it possible to decode the mystery of the cat?

I’ve noticed that, no matter how well a cat fits a certain pattern of personality traits, he will also have his own unique idiosyncrasies. How do we place these into the personality pattern? My cats seem to have each had their own special way of doing things. Here I will give you some examples.

What Unique Traits Do Your Cats Have?

By the way, as you read, if you can recall certain traits that are unique to your cat, please share them in the comments below this post, so we can see still more ways that our cats can move out of the mold and do things their own special way.

One way in which cats seem to have their own ideas has to do with their sleep habits. Each of my cats had a definite favorite spot to spend the night. Of course, with my fur babies, in all cases it was on my bed, but each had his own preferences. Here is a look at the habits of my most recent cats.

Maxine, my Siamese, slept by my side with one paw in my hand. So sweet! Carlos slept on the pillow next to mine, made biscuits against the edge of my pillow before sleeping, and purred us both to sleep.

Pogo slept under the covers, smashed up against me, with his head on my arm. Mocha on the other hand, does not sleep under the covers. Instead, he sleeps on the top of the covers. I sleep on my side and he fits in the space created by my bent knees. He uses my leg for a pillow.

Sam Cat, my Spruce Island Head Cat, also liked to sleep under the covers next to me. He, however, shared my pillow, with his head next to mine, out of the covers. Then he would take one paw and sttrreetch it up the pillow next to his head. Then he went to sleep.

Where Do Your Kitties Sleep?

Then, there is the morning wake-up ritual. Each cat had a different idea about the best method to get me up. Someone once said, “there’s no snooze button on a cat who wants breakfast.” So true! If you want a good example of persistence, use the cat’s method for getting you up as a good example.

Maxine had a couple of interesting techniques. One was to lick the ends of my fingers. If that didn’t work, she’d move down the bed and then jump on me; then she’d run like the wind before I could touch her.

Both Carlos and Pogo used “noise therapy” to get me up. They would have agreed that a constant battery of “I want my breakfast” in cat language should do the trick. Of course, they might be called upon to walk up and down on me if necessary.

Mocha is a bit more subtle. He’s an unusual cat. The only time he actually meows is when you deliver his food. The rest of the time, he converses with trills and chirps, rather a charming way of communicating. Sometimes we’ve observed him carrying on such a conversation with himself.

After all, I talk to myself sometimes — who says the cat can’t do the same thing? Do your cats talk to themselves?

My mother had a cat who would sit on her chest in the morning and pat her on the face. She said when she opened her eyes, she’d see these two round cat eyes staring at her.

What about litter box habits? Do your cats dig and cover, or do they leave their “deposits” out in the open? My cats seemed to be pretty evenly divided on this issue. Pogo, for example, kept everything above-ground, while Mocha buries it so nothing shows.

Mocha spent time on his own before the shelter — they picked him up as a stray. Perhaps his carefully covering his deposits was a behavior that developed while he was living on his own, as he would have to be on guard against predators.

Pogo, on the other hand, ended up in the shelter, because he kept urinating outside the box. The main reason had to do with his covered litter box. He didn’t like using it. I have a feeling that, when the humans left, the dog would come check out the box, upsetting the cat considerably.

At any rate, at my house he had a large uncovered box, and he always used it.

Do your cats use their box as soon as you clean it? Mocha just used the box here in the office, which I had just cleaned. That’s good evidence that they like using a clean box.

What about play? Do your cats have favorite games or ways to play? Do they have any original games?

Pogo, being an old cat, didn’t get as wound up as my young new at, Mocha. However, he liked his game of chase and pounce. He did have one really funny thing he did.

At night, when lights were out, the night light lit the room sufficiently so when Pogo got on the bed, he could see his shadow on the wall. He found that shadow fascinating. He’d run at it, as if he were going to attack it. He never tried to grab it, but he threatened that shadow with a direct attack quite regularly.

He found the shadow of his tail especially fascinating. I doubt he understood what caused the shadow, but he seemed ready to take it on at any time.

Maxine had a favorite game that she played regularly. Next to my bed, between it and the wall, I had a round “cat cave,” covered in carpet. It had two levels and an upper and lower entry. Maxine would get on the bed, catty-cornered to that cat cave and run at it, as fast as she good. She’d hit the upper doorway at full speed, descend to the lower level and out.

Then she’d run to the far end of the living room before coming back and trying the maneuver again. She cracked me up!

Now, Mocha, my newest cat, is a nut! He loves to play. After supper, he likes to take a little nap. However, when he awakens, you’d best play with him for a while if you want any sleep.

He takes a couple of his favorite toys under the bed, and while I’m trying to go to sleep, he pounces on them and jumps around, often hitting the bottom of the box springs in the process.

There is no way to sleep through that — you have to wait out his play-time. Now, I try to coax him into a bit of energetic play before bedtime, in the hopes that he will settle down and I can sleep.

Zounds! They’ve Got The Zoomies!

Night-time zoomies have their followers as well. From time to time any one of the cats would choose to have a zoomie session just before sleep-time. Pogo and Mocha both indulged in this sport regularly. In the morning when I got up, I’d find all the small throw-rugs in little heaps, casualties of the zoomie session.

I know I’ll think of more examples as soon as I publish this post. They will have to wait till the next opportunity. Meanwhile, I’m hoping you will tell us of some of your cat’s idiosyncrasies in the comments below. Keep us laughing — we all know the benefits of that kind of medicine!

2 thoughts on “Tell Me, Can You Decode The Mystery Of The Cat?”