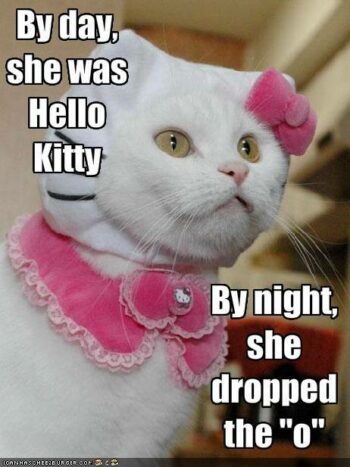 Can you name the dominant traits that make up your kitty’s behavior? These traits can help define the personality of the cat. Not all cats are created in the same mold, scientists find.

Personalities can differ because of the breed of the cat. It turns out that some breeds tend to show more of one specific quality than another. These provide some insight into that cat’s specific personality.

For example, studies show that the Russian Blue displays the most fear, while the Abyssinian showed the least fear. It’s not surprising that the Bengal got the award for most active breed, while the Persian displayed the most passive personality.

Siamese and Balinese tended to exhibit the most excessive grooming, while the Turkish Van showed more aggression toward humans and less sociability with other cats.

It’s hard to do such research with a cat, as it does not work well in a lab. Cats act differently when taken from their comfortable environment, so studies work better if done in the home.

The references I used suggested from seven to fifteen distinct cat personality patterns. Sometimes a cat will fit well into one pattern, but very often they exhibit a combination of these traits. What is the personality of your cat?

In this blog, you will learn of five common personality types. If you would like a more comprehensive list, read the reference listed below from excitedcats.com, which lists 15 different cat personalities. With my cats, I’ve found that they tend to fit more than one type. It’s sometimes hard to distinguish exactly.

Do you recognize your cat in these five?

This cat likes handling and lots of interaction. He enjoys sharing his space with his human. In general, you will find this cat very friendly and calm. He responds toward people by displaying affection through kneading and purring. He can cope well in a busy, active house.

The curious cat always looks for new things to investigate. He explores new scenes, items, sites and noises in his kitty world. This cat thrives on meeting new people and exposure to new events and situations on a regular basis.

He will need puzzle toys and novel cat experiences.

This cat lives for the hunt. He stalks, captures, and plays with prey. He will display these tendencies when he plays, but he would actually prefer the outdoors, where he can put his hunting skills to work. He might become bored and dissatisfied if he can never go outdoors.

My Carlos was such a cat. When he picked me for his forever partner at the animal shelter, he must have smelled the outdoors on me. I have been fortunate enough to live in very rural areas where I could let him out during the day. Supper was at 4:00, so he had to come in then.

When we lived in Bell’s Flats, near Kodiak, he caught full-grown rabbits. I finally convinced him to eat them outside. He took them under a favorite tree, then invited Tiger, the neighbor’s cat, over for dinner. It would take them three days to eat a whole rabbit.

Carlos fit into more than one personality category. He was a people cat, greeting all guests at the door and giving them lots of attention. He was also a cat’s cat, the final category of this post. He provided a good example plus leadership for the other neighborhood cats. One of his titles was “leader of the Russian River killer cat gang.”

When we moved to Gustavus, Carlos did not approve of the lack of rabbits. He did not like voles or shrews particularly, but hunted them because he could find nothing else. He preferred to give them to me.

He had a game he’d play with small critters he caught, such as voles. He’d toss them high in the air, and when they hit ground, he’d run and grab the critter and toss it again. I found it hard to believe that he could throw something so high in the air. Amazing behavior!

This cat has the least tolerance for human interaction. He wants to be handled only on his terms. He doesn’t much like petting unless he solicits it. He is hyper vigilant and will let you know if he thinks you infringe upon his space.

My new cat, Mocha, though bonded with me, is such a cat. His first order of business in the morning is to reach out and grab my hand, and, if he can get away with it, to bite, hard, if I try to pet him.

We’ve been working on this behavior. Now, I don’t try to pet him upon awakening unless he comes and asks for such attention. Then we’re fine. Once we got our boundaries set, he behaved. Now he’s slowly calming down, but I’ve found it’s best to be on guard, just in case.

I’d love it if he’d act more cuddly, and think such behavior may happen over time, so long as I respect his wishes on the matter.

This cat enjoys the company of other felines in his home. He will play with and groom his siblings, forming a most harmonious environment. If you have to work, this kind of cat can avoid loneliness by his social behavior.

Carlos was such a cat — a good example for his cat friends. His best buddy, Tiger, thought Carlos “the cat’s pajamas,” and would come over to our house and in the cat door as soon as he saw movement. He spent his days with Carlos, which turned out to be a blessing, as I had to go to work each day.

In Gustavus, Carlos lost his kitty friends, but he had my company all day every day if he wished, and that seemed to satisfy him.

Scientists hope that by identifying these genetic, environmental, and personality factors, they can better understand how a kitty’s mind operates.

The importance to us becomes in realizing that one cat’s personality can differ quite a bit from another, just as human personalities can vary. So, can you identify your cat from these categories? Learning to recognize the cat’s specific traits can help you with giving kitty the atmosphere most conducive to meeting his needs.

The more we learn about our four-legged furry friend, the happier we can make his life, and our understanding of him will help us in knowing how to care for him.

When he has a happy environment, hopefully it will extend to us as well.

1 thought on “What Do You Know About The Personality Of The Cat?”