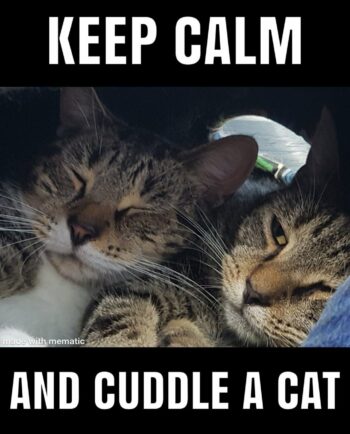 If you have lived with a cat for some time, you have undoubtedly witnessed some of these feline superpowers. Perhaps a few on this list will be new to you. These 10 cat superpowers will often prove to be the most obvious, but your cat has others as well.

The sense of smell is kitty’s most important of the five senses. Compare your cat’s nose to yours: Kitty has more than 200 million scent receptors in the nose, compared with 5 million in our noses. With 40 times more scent receptors, he can detect far more odors than we.

The cat can also smell chemicals that we can’t smell. His extra organ, called the vomeronasal organ, has its place on the roof of his mouth. It’s also called the Jacobson’s organ, and allows him to detect pheromones released by other cats.

Such a sensitive nose gains a vote for a superpower, as we can never match kitty’s ability to excell by a nose.

2) An Incredible Sense Of Hearing

Up to about 20,000 Hertz (Unit of frequency describing one cycle per second), our hearing and that of our cat register about the same. However, above 20,000 Hertz, sounds become very difficult for us humans to hear.

The cat’s ear anatomy gives him another advantage. He can differentiate between sounds as close as 1/10 of a pitch from each other. Thus, he knows exactly where the sound comes from, and how far away it is.

He can also hear sounds up to 4 or 5 times further away than what we would hear. Because of this fine-tuned hearing ability, he can pounce on a mouse just by hearing it, and not even seeing it.

3) Can You Outrun Your Cat?

Have you ever tried racing with your cat? Have you ever won? Doubtful. A cat can run up to 30 mph, something we cannot match. Bigger cats can run faster, but for his size, the cat amazes. A large cat, such as a cheetah can run up to 130 mph; the tiger clocks speeds up to 65 mph.

However, the little cat does quite well in the speed category. Hopefully, he will outrun any danger he might face.

4) Ability To Rotate After A Fall

Due to the cat’s extreme flexibility, if he falls from a high spot, he can rotate in mid-air and land on his feet. This skill may not work on a very short fall, as kitty does not have time to rotate. It may also not work on a very long fall, as the landing may be too impactful.

However, kitty does land on his paws, which act as shock absorbers. These help to minimize any impact. Research shows that cats can fall down 5 stories and still survive, though some needed a visit to the vet.

5) If Needed, On-Demand Weapons Are Available

When it comes to paw-to-paw combat, your kitty has great equipment. First, there are those needle-like claws, ready to grab and scratch. They can do a great deal of damage if kitty unleashes them into full service. Watch out!

In addition to the sharp knife-like claws, kitty has teeth that can puncture and penetrate. These can add some blood and gore to the scene, so it’s best not to get into a teeth-and-claw argument, with the cat. You could well be the loser.

If a cat thinks a particular spot would make a great nap spot, even if it does not really match the normal requirements of a snooze spot, the cat will find a way to make it work. If the spot happens to be in a small box, kitty will adapt his shape to that of the container.

I have a picture that illustrates this idea well. It shows a cat sprawled sleeping on a very bumpy pile of firewood. The caption reads, “Cats will always sleep soft.” Sure–he just adjusts his body to match the contour of the logs.

If threatened by a dog, the cat suddenly becomes twice as big. If he needs to squeeze through a small hole, he contorts his flexible body to get through it. Shape-shifting can certainly prove a useful skill!

7) Can You Jump 5 Times Your Body Height?

You don’t think you can? Well, your cat can. Have you watched him jump from the floor to the top of a counter or bookshelf? My Mocha can jump nearly to the top of my 6-foot fence. Certainly this ability qualifies as a superpower.

One minute, the cat simply stands on the floor. In the next, he jumps straight upward and lands on a spot far above him. He makes it look so effortless and simple, even graceful.

Studies have shown that some cats, if fit and agile, can jump as high as 8 feet, remarkable for a creature so small. Now, that cat would simply soar over my fence!

8) Your Cat Has Some Healing Powers

First, there’s the remarkable purr. Did you know that science has shown that your cat purrs in a certain pattern or frequency that wil lead to vibrational healing treatments? The sound, so soothing, can also act as a sleep aid, if your kitty sleeps with you.

Science shows also that frequent purring can help improve bone density, so if you have a broken or damaged bone, keep the cat next to the spot and urge him to purr.

When I had my first knee replacement, Carlos, my cat, spent the first three days after I returned home lying under the covers, next to my damaged leg. I’m sure his purring helped with healing.

A cat also can serve as a therapy animal, by helping to soothe anxiety and depression and by giving you a great way to deal with stress. Pet that kitty, and add the sound of purring to the healing mix.

Does your cat know what time you get home and waits by the door for you? Cats can’t tell time…they don’t carry watches, like the rabbit in Alice and Wonderland. They just know. They must have some extrasensory perception abilities to figure it out.

Same thing for knowing when it’s mealtime. They don’t look at the clock on the wall and know to bug you to prepare them a meal.

How about the skill of knowing before it happens that some catastrophic event is about to happen, such as an earthquake? Cats can pick up on signals from the earth that alert them to the approach of danger.

If your cat loves you and has bonded with you, he offers his love with no strings attached. His superpower allows him to see you as a vulnerable fellow being deserving of love and affection. No matter what happens next, the cat’s love is ongoing. This love is a gift; a treasure.

I can use myself as an example here. I live alone. My last kitty crossed the Rainbow Bridge about 3 years ago. Finding Mocha has helped seal up a hole in my heart, and has given me a companion: someone to talk to, play and interact with, and share the love.

My life has become so much sweeter since Mocha has moved in. His love makes the days pass smoothly and makes my heart light and happy. There is no question in my mind that the power of his love has helped me to feel whole and blessed.

Kitty has other superpowers. Perhaps you know of some of them. Tell us in the comments. You can also read the references I used for this post, as they, too, have some other suggested superpowers. Realize your luck in having such a remarkable creature in your life.

2 thoughts on “Special Report: Learn About The Top 10 Cat Superpowers”