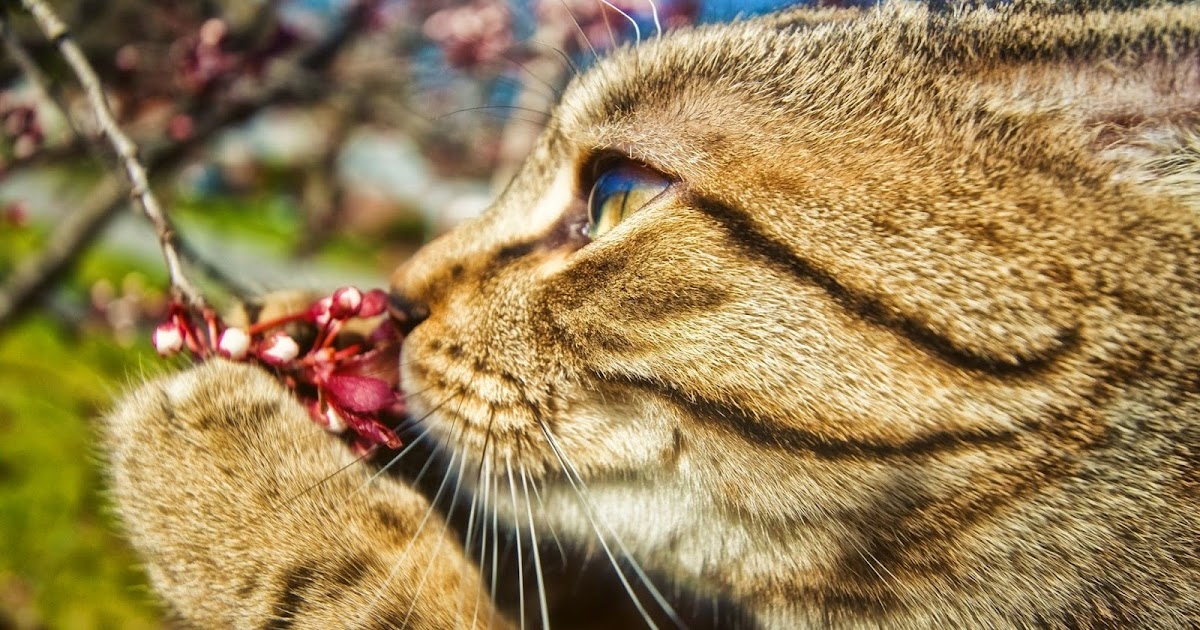 The Most Important Sense For Kitty

As you might guess after reading this post, the sense of smell is actually the most important of the cat’s five senses. Look at this figure: a cat has more than 200 million scent receptors in that cute nose, as compared with the paltry five million we humans have. In other words, cats have more than 40 times as many scent receptors as humans.

Cats also have the capacity to smell chemicals, called pheromones, which we humans can’t smell.

Cats Have A Vomeronasal Organ

Your cat actually has two mechanisms for detecting odors or chemicals in the environment. He has, of course, the normal olfactory receptors, which we also have. However, he comes equipped with an extra organ, called the vomeronasal organ, situated on the roof of the mouth.

This organ, also called the Jacobson’s organ, allows your cat to detect any pheromones released by other cats. From the information the cat gathers, he gains extremely helpful information about others who live close by, including you.

Have you seen your cat pause and hold his mouth open? He actually investigates a new smell in this way. He uses his tongue to move scent molecules over that vomeronasal organ. Often the cat will curl up his upper lip, which is called the flehman response.

Kittens Use Sense Of Smell

From birth, cats rely on their sense of smell. They use this sense to bond with their mother, with recognition that she is their first source of food and comfort.

In fact, being blind at birth, that all-important sense of smell helps the newborn kitten to find the sustenance-giving nipple. By day three, the kitten has selected a preferred nipple, which they locate with their wonderful nose.

Varied Uses For A Cat’s Sense Of Smell

Cats, having such an advanced sense of smell, use this sense for many things. Below you will find a partial list:

Cats can not only sniff out the area to learn if any prey hides nearby, but they can also become alerted to the identity of any unfamiliar animals or new people.

The smell might bring important information about the presence of a predator lurking nearby. Since cats become either predator or prey, learning what’s in the area can be life-saving.

Simply by using that marvelous nose, the cat can discover if food is fit to eat or spoiled.

3) Communication with other cats

When meeting other cats, kitty will use a physical greeting, such as a head bump, to say hello. This gentle bump will release pheromones from glands in his face. From these, the cat receives such information as their sex, if they are healthy or sick, their favorite food, and what sort of mood they are in.

Mating becomes the main subject matter of the vomeronasal organ. This organ will identify pheromones so the cat will know if the other cat is in heat. A female cat in heat will give off such a powerful pheromone that the male cat can smell her up to a mile away. Females can also use their own sense of smell to identify and locate a prospective suitor.

Cats use scent glands on feet, cheeks, face, and tail to mark their territory. They can also mark an area with urine. These signal “ownership” when other animals read the signs.

Sometimes a cat will mark the territory just because he senses other cats in the area. They often mark because they feel stressed or threatened.

Let’s Compare The Sense Of Smell Between Dogs And Cats

In general, cats have a better sense of smell than dogs. Compared to the roughly 200 million scent receptors in a cat’s nasal passages, most canine breeds have a significantly lower number of receptors in the nasal cavity.

You will find exceptions: For example, the bloodhound. This dog can have around 600 million receptors. Other dogs with a highly developed sense of smell include beagles, basset hounds, the Belgian Malevois, and the German shepherd.

It has also been discovered that a cat has a much more powerful ability to distinguish between scents than can a dog. The V1R receptor, which distinguishes between scents, is far greater in number in cats than in dogs or humans.

By comparison, cats have around 30 V1R receptors in their noses, with dogs having only nine and humans two.

Strong Scents Can Cause Respiratory Problems For Kitty

Do be aware that because of the highly sensitive olfactory sense, your cat could become more vulnerable to respiratory problems. If he develops a respiratory problem, it’s very important that you deal with it immediately. Though cats do have taste buds, these are few. A cat uses the sense of smell to locate and consume food, so if he can’t smell it, he won’t eat. Not at all a good situation.

A certain aerosol spray might not bother us, but it could trigger a severe inflammatory reaction in kitty’s nasal passages. Also, such scents as disinfectant aerosol sprays, perfumes, or even strong fabric detergents can cause a cat to sneeze a lot and often can cause profuse nasal discharge.

So, please become aware of the kind of scented products you use in your home, as it could cause a big problem for your cat. If you detect signs of respiratory disease, better see the vet right away to find the cause and rule out serious problems.

Can Your Cat Smell You?

Cats recognize their owners by the scent they give off. In fact, if you smell really strong to your cat, he can use that scent to find his way home if lost. One study suggests that a cat can smell over distances of 1.5 to four miles away.

Pretty amazing! However, when you consider the cat’s highly developed sense of smell, it does seem possible that he’ll catch a scent from such a distance. The cat will rely highly on that sense of smell; much more so than their sense of sight. Their eyesight allows them to hunt in the dark at night. However, it’s their sense of smell that becomes their primary way of navigating through their environment.