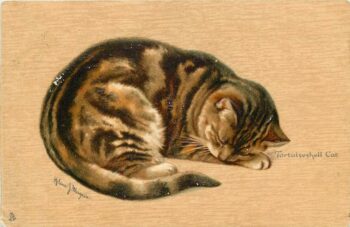 What do you know about the healing energy of cats? This post furnishes you with a review of a chapter in a book called, “The Mythology of Cats,” by Gerald and Loretta Hausman. Each chapter of the book is about a different breed of cat, and what special power they contribute to humans.

The chapter covered in this review carries the title, “The Healing Cat.” It discusses the tortoiseshell cat, or what we often call by the common name of the “calico cat.” 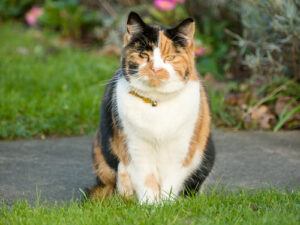 The calico can have more white than the true tortoiseshell, though the name is used interchangeably in North America.

This cat, the authors say, can be designated as “the healing cat,” as this animal has long been known for the ways in which it can help your health. The authors call it “the icon of the medicine woman.”

In olden times, if a person had a stomach ailment, the cat, lying lengthwise on the patient’s belly, became a living hot water bottle.

In those days, people also believed that the mere presence of a tortoiseshell could impart clairvoyant powers to people, and thus they became much sought after as playmates for children.

Sea captains held the tortoiseshell in high esteem, and went to great lengths to possess one as the ship’s cat. If the cat fell overboard, a sailor would dive overboard after the cat to rescue it.

The Power Of The Purr

The purr of a cat has always been considered a pleasant sound to us humans, and a tortoiseshell cat seems to convey the best of velvety purrs. 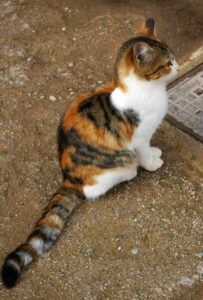 Ruth Wright, owner of a tortoiseshell cat, tells this story:

She said she received her cat whom she named “Fur Purr,” when she first met her husband. Ruth had been the victim of a hit-and-run accident, and her husband took care of her while she lay in bed, incapacitated.

Her broken leg had a 30-pound cast on it, and Ruth could not sleep at night because of that cast. Her husband got her a tortoiseshell cat, and she named him Fur Purr because of her marvelous song.

Once the cat joined Ruth at night, she sang her to sleep. The cat somehow created the right atmosphere for relaxing, and Ruth slept, cast or no cast.

During her long recuperation, she worried about how the leg was healing, as she had multiple fractures that took a long time to mend. However, the cat kept her company, all day long, singing that excellent purr-song. She sat on her cast, right above the broken bones. Ruth wondered if the cat laid there because she knew the injury location.

She thought perhaps kitty did have healing powers, and she imagined the cat’s purr vibrating through the shattered femur, and helping pieces knit back together.

After six months, the femur had healed nearly perfectly, and she could walk again. She appreciates Fur Purr a great deal.

It is interesting to note that scientists now feel that the cat’s purr does have some kind of healing power that helps knit bones back together.

The Lore Of The Tortoiseshell

This cat belongs to the American shorthair breed, having mottled or splotchy fur. Fur Purr’s coat had an underlayment of white, with splashes of mocha, black, beige, and gold decorating it. Though the tortoiseshell might deserve to be a breed of its own, its ancestor comes from the common European house cat brought to America in the 1600s.

The short-furred American variety passed the test of the cold chill of a northern winter. It did well in the rugged terrain of thorn and bracken. It survived all the seasons well.

Its first job became the catching of rats in the holds of ships bound for the New World. Then, it moved into farmhouse and barn to catch mice and rats. Due to the severity of its new environment, it undoubtedly developed a sturdier frame and hardier muscles than its European cousins.

The nose and face of the tortoiseshell appear squarish and short, with eyes set far apart. Its symmetrical face appears in harmony with its body.

Healing Comes From The Sea

The healing power of the cat is connected with the sea. Just as the long-lived turtle had many myths as to its power, so the cat also became a symbol of the elements of life. The turtle, the cat, and the bird — all these visual images became compressed into one symbol. 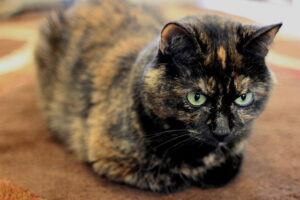 In time the pre-Hellenic image of woman/turtle/bird turned into the essential tortoiseshell cat. Its color, fur, purr, and personality became reminders of ancestral deities.

The theme of constancy contains the essence of what it means to be a turtle. This theme becomes adapted naturally by the tortoiseshell cat. With its corresponding turtle-like markings, the cat becomes the ultimate embodiment of many myths — European, Asian, and American Indian.

Thus, we learn to heal ourselves, not with a turtle-shell shaman, but with a happily-purring kitty.

We can be pleased that this is so, as we can cuddle with a cat much better than we can with a turtle.

If you would like your own copy of this book, here it is, from Amazon. You can buy the hardcover copy listed here, or you can select a paperback copy or a used book. Whichever you choose, I will gain a small commission percentage from your purchase.

The Mythology Of Cats

Feline legend and lore through the ages

2 thoughts on “Do You Believe In The Healing Energy Of Cats?”