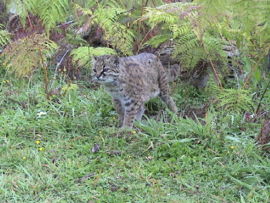 Someone asked me if there were still small wild cats in some places. When I started researching, I found that there are 41 species of known wild cats living in various parts of the world. This includes large cats.

In this post, I will list several of the small wild cat breeds that are presently in existence. In future posts, I will look for information regarding specific breeds of these cats.

This information was taken from a post in wildcatsmagazine.nl. The photos were taken by Babette de Jonge, who is the founder and CEO of Wild Cats World, and she has been kind enough to let me include a photo for each cat. On her site, there are many more wonderful pictures. Visit her websites to learn more about wild cats at www.wildcatsworld.org or www.wildcatsmagazine.nl.

Because there is so little known about many of these small cats, it is difficult to protect them. They, like bigger cats, are threatened with loss of habitat and food supply, being killed indiscriminately and by conflicts with humans and other domesticated animals. If you would like to learn what you can do to help protect these animals, inform yourself. Go to www.wildcatsworld.org.

This is one of the subspecies of Felis silvestris. About 10,000 years ago, some of these wild cats were domesticated in the Middle East. These became the ancestors of today’s domesticated cats.

This cat is found in several habitats, such as steppes, savannas, and bushland. The species is also known as the desert cat, and is sandy brown to yellow-grey in color with black stripes on the tail. Its fur is short. It eats mice, rats, and other small mammals, as well as birds. The species is mainly active during the night.

This cat is one of the most endangered wild cats in North America. The animal cannot live in captivity. All these cats died as soon as they were captured. There are fewer than 2500 still thought to exist.

This rare cat prefers high-elevation habitats with deep valleys. The numbers are declining because of the loss of prey base and of habitat. Also, it is hunted for traditional ceremonial purposes. It is often killed in Chile and Bolivia due to local superstition.

This small wild cat is found in several African countries. It likes arid semi-desert and savannas. A solitary animal, it is active only at night and thus is rarely seen. During the day, it sleeps in springhare burrows, under shrubs and rock slabs, and also in hollow termite mounds.

This cat, one of the smallest breeds of cats, has a head that appears to be too big for the body. Fur is cinnamon buff to tawny, or off-white with distinct solid black spots. These are joined in bands behind the shoulders, and form rings around legs and tail. Soles of the feet are black.

This cat’s basic color varies from light grey and grey-brown to buff or dusky brown. The fur is marked with small, round black spots. Its short tail is very bushy, and grows wider toward the tip.

Their habitat is forest. They are active day and night unless around humans; then they become nocturnal. Though they live on the ground, they have well-developed climbing abilities.

This animal is also called the Chinese Desert Cat, and comes from western China. Though it is the least-known member of the Felis genus, it is most likely a subspecies of Felis silvestris.

It resembles the European Wild Cat in appearance, except for the color of the fur. It is sand-colored with dark guard hairs. The cat’s underside is whitish, and there are black rings on the legs and tail.

The skull is broad, and long hair grows between the foot pads. The species inhabits sparsely-wooded forest and shrublands, or occasionally it can be found in the desert.

Though the cat is protected in China, it is still endangered due to the organized poisoning of pikas, its main prey.

Geoffrey’s Cat is probably the most common wild cat in South America. Though it is not presently endangered, it is hunted extensively for its pelt, so may end up on that list fairly soon. This cat is about the size of a domestic cat, with black spots on its fur.

The background color varies, though a brownish-yellow coat is most

common. In the southern areas, the cat is grayish.

The species feeds on rodents, small lizards, insects, and occasionally frogs and fish.

Also known as the swamp lynx, this cat is believed to be the largest remaining species of the wild cat, Felis.

This medium-small cat is most commonly found in India. It can also be found in Egypt, West and Central Asia, South Asia, Sri Lanka, and Southeast Asia. It is solitary, and lives in tree holes, under swamp rocks, or in other animals’ abandoned homes.

An unusual feature of this cat is that it has equal-sized claws on both the front and back feet. These claws allow it to climb down a tree, head toward the ground, as easily as climbing up. The color of the fur is yellowish-gray to reddish-brown. It has pointed ears and long legs, giving it a resemblance to a small lynx.

When threatened, the cat will vocalize with small roars before it attacks. Usually it retreats if the threat is too large. It is interesting that the male “barks” during mating season, sounding like a large dog.

This small, spotted cat doesn’t even have a common name yet, as it was just discovered in 2013. It is found in tropical rainforests in Southern Brazil. It was originally thought to be related to the Oncilla. However, studies of the cat’s genetics showed it was not interbreeding with the Oncilla. Though likely quite similar, its DNA is genetically distinct.

his cat could be the world’s smallest wild cat. These cats are found in a relatively small territory. They live in moist and dry deciduous forests as well as scrub and grassland in India and Sri Lanka. They are not likely to be found in evergreen forests, as they prefer dense vegetation and rocky areas.

They are primarily nocturnal. They sleep by day in dense cover or in the shelter of hollow logs. They eat rodents and birds, as well as lizards, frogs, and insects. They hunt on the ground, but use trees to escape predators.

This cat is a small African wild cat, closely related to the Black-footed Cats. The name, “desert cat,” could be applied to this species, as it lives in hot and dry areas. It is found in the Sahara, the Arabian Desert, and the deserts of Iran and Pakistan.

The sand cat is solitary, except during mating season. It digs burrows in the sand to escape the desert heat, then comes out in the cooler night to hunt.

The diet consists mostly of rodents. Their large ears help them hear prey. They obtain all the water they need from eating their catch. Thus, they avoid watering places where other predators might cause them harm.

These are small cats. The average weight is six pounds. The head is broad and the large, pointed ears are widely spaced and can be flattened or pointed down when hunting.

Fur is pale sandy yellow, with pallid bars that are sometimes hard to see. The paws are covered with long hair that allow the cat to move easily over the hot sand of their habitat. These cats can survive extreme temperatures, ranging from 23 degrees Fahrenheit to 126 degrees Fahrenheit.

The Tiger Cat, or Oncilla, is a small spotted cat. It is found in the tropical rainforests in Central and South America It is a close relative of the Ocelot and the Margay.

It has a rich ochre coat, spotted with black rosettes. It is a nocturnal animal unless it needs to be hunting during the day.

The Oncilla resembles the Margay and Ocelot. However, it is smaller, with a slender build and a narrower muzzle.

The fur is thick and soft. The coat ranges in color from light brown to dark ochre, and has many dark rosettes across the back and flanks. The cat’s underside is pale with dark spots. The tail is ringed. Its coloration allows it to blend with the mottled sunlight of the understory of a tropical forest.

This cat hunts small creatures, such as rodents, birds, some mammals, and the occasional frog. It has been known to eat grasses (perhaps to aid digestion, as with domestic cats.) Deforestation and poaching have made these cats vulnerable. Highly prized, they are hunted for their pelts. Human expansion is encroaching on their territory.

DO SOME INVESTIGATING ON YOUR OWN

If you are a cat lover and want to do something to help with the survival of these wild species, please go to Babette de Jonge’s website, wildcatsworld.org, or to www.wildcatsmagazine.nl to learn more. I hope you have enjoyed this article. I’ll be adding more information about specific wild cats in later posts.

15 thoughts on “Can You Name the Small Wild Cat Breeds of the World?”