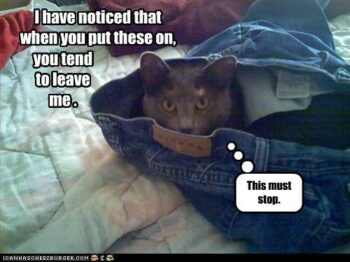 Cats can become anxious for many reasons. In some cases, anxiety seems a constant factor in their lives. Actually, I became interested in this subject because of my own cat. He doesn’t have the more serious signs of cat anxiety, but he always seems a bit nervous.

I read in one of my references something that resonated. Mocha apparently was deprived of positive social and environmental exposures during the first 7 to 12 weeks of his life; thus he has perhaps become habitually fearful or anxious.

How can I tell? His eyes are almost always dilated. Occasionally, they will contract to a normal size, but it doesn’t last. I am not sure of his back history. The Juneau shelter picked him up as a stray. He had a microchip, so the shelter called the previous owners. They said they’d come get him, but never did.

My good fortune! I wanted him! I don’t know his past history for sure, but he’s a polydactyl, and the shelter told me about a group of feral polydactyls who live in one Juneau trailer park.

I believe someone saw him there as an adorable kitten; picked him up; never really dealt with proper socialization or his anxiety problems; finally the cat escaped and moved on.

As Mocha also had definite aggressive tendencies, probably again stemming from lack of socialization (he likes to bite and scratch), I started by dealing with those. He’s become much less aggressive and seems a lot calmer, but those dilated eyes tell me he must still be anxious or nervous.

So, tell us other signs of anxiety in cats. Let’s look at the list:

Some behavioral and physical problems that indicate anxiety in cats:

Severe hair loss: Can occur in stressful situations. With anxiety, muscles stay stretched and tense for a long time. In those muscles reside hair follicles, and when the muscles contract, hairs often become expelled from the follicles.

Excessive grooming: With this one, we take hair loss a step further. A stressed cat often licks persistently and intensely on different parts of their bodies. They may also simply pull fur out. Such excessive grooming needs monitoring, as it can lead to irritations and infections.

Gastrointestinal problems: A kitty’s anxiety can cause such problems as nausea, vomiting, or diarrhea and constipation. If these occur, first rule out any medical cause. If you find none, chalk it up to anxiety.

Hiding: Kitty may feel the need to retire under the bed, or in some other spot where he feels safe.

Increased aggression: Some cats react to stress by displaying intense aggression, towards other animals or people. They won’t hesitate to use claws or teeth, so be careful.

Urinating outside the box: If such behavior has no indication of a medical problem, it most likely can link its cause to stress. Changes in environment or food or the addition of a new family member can cause such behavior

Body language: If the tail hangs low and kitty moves it back and forth abruptly, or if the ears look like they’re pinned to the head, and pupils dilated, your cat might be intensely anxious.

Heavy breathing: If the cat has become extremely anxious, he may show signs that it’s an effort to breathe. Often such a condition can be due to an increased heart rate. If kitty breathes with an open mouth and is short of breath, take him to the vet immediately.

What About Separation Anxiety?

One very common form of cat anxiety is separation anxiety. If you leave kitty home alone or go somewhere out of their sight, they can become anxious and stressed. This condition often occurs in cats who were abandoned or perhaps passed from owner to owner.

This cat, when left alone, will exhibit actions associated with fear, because he feels anxious due to the owner’s absence. I read one story about a woman who left a tape recorder running one day when she left the house, so she could hear if her cat reacted vocally to her absence.

She was appalled when she played back the tape, as the cat cried nonstop for a long, long time, until he must have finally cried himself to sleep.

Remember this one rule when dealing with a stressed or anxious cat: Never punish him for such behavior. The punishment will make the situation worse, not alleviate it. This negative reaction could be the worst thing you do, so don’t scold.

It’s important to try to learn the trigger for your cat’s stress. Then, you can address the problem. As a cat likes his routine to be the same, such things as moving or adding a new family member might be just enough to stress him out.

If the problem does not go away, work out a treatment plan with your vet. It might require a prescribed medication. You might try Feliway to help relieve his stress. I’m using this product with Mocha, and I think it may be helping.

Make sure kitty has a retreat where he can hide and rest; a quiet, comfortable place. This is a great start. A cat tower might serve well. Of course, under the bed is always considered a safe spot by most cats, though it might not provide the most comfortable place to sleep.

It’s important to get to know your cat, so you can figure out what he wants. Give him attention; play with him; make sure to provide a healthy diet. Time and love can work many miracles. Your cat can prove to be a fine companion if you help him lose his fear and anxiet