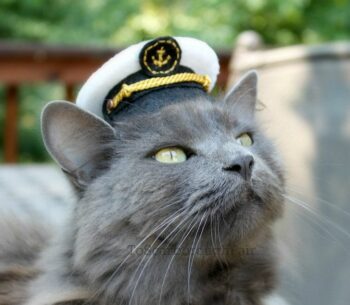 Hello, my two-legged reader-friends. Lucinda the literate cat here. My CCL (Cantankerous Cat Lady) has asked that I write the next post. I have selected a story from a book I’ve reported from before, called “The Personality Of The Cat,” edited by Brandt Aymar.

If you haven’t done so, you might enjoy reading one of the other posts I wrote, reviewing another story in this book. That one was called “Have You Read Cat’s Paradise by Emile Zola?”  I’ve included a link here so you can read it if you’d like. It has become one of our most popular posts.

This new story goes by the title of “The Fat Cat,” by Q. Patrick. You will read a story of bravery and devotion, and I think you might find it a good tale.

You could call this one a war story, as it takes place in the middle of military maneuvers. Marines capture the old mission house at Fuja. I have no idea where to 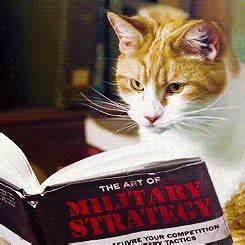 find that place, and the story does not tell you.

When the Marines finally explored the place, imagine their astonishment when they found a fat cat sitting on what was left of the front door mat. She licked her paws in a serene fashion, placidly, even though the place had been shell-blasted steadily for two days.

Perhaps she had some magic in  her. Finish this story and then tell me if you agree.

In the story, the men gathered round the cat, and the cat, for reasons known only to her, spotted Corporal Randy Jones and ran toward him, then weaved in and out of his muddy legs, purring loudly.

Randy picked her up and rubbed his face against her shiny fur. The cat perched on his shoulder like a queen, and after that, never wavered in her devotion, even though the other men tried to lure her away with tasty food morsels.

Why did she choose Randy? He had the reputation of being dour and solitary, and he had a very ugly face, according to two-legged standards.

Have you noticed that cats don’t care what you look like if they have reason to bond with you? We cats do not judge by appearances, as you two-leggeds do. A cat senses the internal characteristics of a person.

The cat knew from her reservoir of internal cat understanding which man in the group would care for her and love her as she deserved. The fat cat evidently saw these characteristics in the man she chose, and no favor or seduction from the others caused her to change her decision.

This love for the cat left Randy in a state of ecstasy, and he cared for her as would a mother. Randy came from a large West Virginia mining family, being the homeliest and most ungainly member. He had never before caused any man or woman to view him with affection, until the fat cat changed everything.

However, a few days later the company had to carry out a flanking movement on the enemy’s headquarters. Each man had to carry his own supply of food and water and sleep in foxholes.

The cat could not go with them. The C.O. told Randy the cat would seriously endanger the group. Moreover, if she followed him, she would be shot on sight.

Randy took her to the cook and left, despite his heartbreak at leaving her. During the 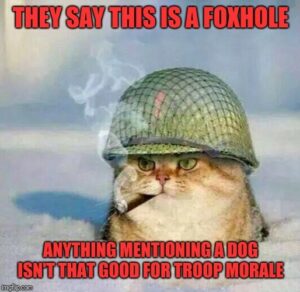 perilous travel through the jungle, he thought about her. Later, he woke from exhausted sleep to find the cat curled up asleep at his shoulder.

He knew he had to get her to leave before they discovered her and shot her. He decided not to feed her, though by now she must be very hungry. He chased her away.

For three days, the cat did not appear, and Randy thought the visit must have been a dream. Then, on the third night, she came. He turned on his flashlight and looked at her.

No longer a fat cat, her fur appeared matted and muddy; her paws torn and bleeding. But the eyes, when she looked at him, held no reproach; simply trust and pleading.

Of course, Randy got ready to feed her then, taking out one of his few remaining cans of rations. Then he realized he would be signing her death warrant, and he chased her away, lashing out at her with the flashlight, and knocking her down.

She lay motionless for a second; then fled, with a little moan. She did not return and Randy did not sleep.

Day five, in really dangerous territory, Randy and Joe, another Marine, went forward to scout. Suddenly, they came upon the headquarters, a couple of hastily-erected shacks.

The place had been recently evacuated. As Randy and the other Marine watched, the cat 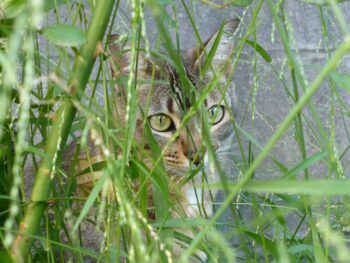 hobbled out from the long grass. It entered the shack, and then returned.

“No Japs,” said Joe. “That cat would have raised them, sure as shooting.”

Then Joe saw a whole chicken on the table in the shack. The cat saw it, too, and leaped on the table clumsily. Joe threw a rock at the cat, hitting the chicken, and not the animal.

Randy jumped to his feet, but a deafening explosion made him drop to the ground. When he raised to look, the shacks had disappeared, leaving a burning wreckage of wood.

Randy couldn’t speak, feeling more desolate than he’d ever felt in his life before.

Then, from behind him came a contented purr.

He spun around. The explosion hurled a crude rush mat out of the shack, and it rested in the grass behind him. Seated on the mat, the cat smiled at him.

Well, that cat used one of her nine lives in that adventure, for sure. I believe the moral of this story should be, “never underestimate the importance and value of a 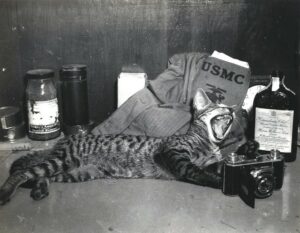 CCL says she thinks there could be a great new verse written for the song, “The Cat Came Back,” using this cat’s adventures. If you have not heard the song lately, look on the right sidebar of this website, under the CWA logo. You will see a video of the song.

This review ends here. If you liked the story, we would appreciate it if you would leave a comment below this post.

This book, The Personality of the Cat, is an excellent collection of stories featuring cats. Perhaps you would like to have your own copy to read from when you want a new, well-written story about your favorite four-legged creature. If so, you can purchase it from Amazon for very little money, and you will have your own copy. Below is the link:

The Personality of the Cat