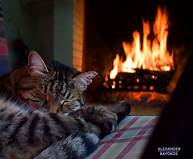 Hello, readers! Are you ready for a new Lucinda summary? The CCL (Cantankerous Cat Lady) just gave me a little story by Emile Zola, called “Cats’ Paradise.” If more cats could read, this one would be good for them to pay attention to. It tells an old story I’ve tried to tell to some of my cat friends, but too often they have to find things out for themselves.

This story was told by the cat to his owner. That explanation stopped me right there. How on earth was that cat able to tell his master a story? The cat must have known some things about talking to humans that I have never learned. I can talk to CCL on my typewriter, but she still does not understand cat language.

Our hero cat was a two-year-old Angora. The cat had been willed to the present owner when his aunt died.

That cat did not realize how good he had it. He had his own private bedroom in the closet, where he enjoyed a plush bed. The food was equally good — lots of fresh meat! 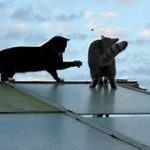 I have noticed that there is often a recurring theme in these stories. The main character doesn’t realize how much he has, and spends his days longing for more.

After seeing those other cats, all our hero could do was to try to find ways to escape. The aunt very carefully kept all doors and windows closed. The cat kept watching for ways to escape.

Then one day someone forgot to push the kitchen window shut, and the cat escaped onto a small roof just beneath it.

The escapee thought the rooftops beautiful. There were delicious odors coming from the gutters, and the cat walked down them, paws in soft mud, like walking over velvet.

Now, I do think I’d enjoy walking in that soft squishy stuff. The problem with such adventures is that I would have to wash my feet afterward. No one would do it for me. I’d have to wash all that mud off again. Yuck!

Then the Angora almost lost his footing when three cats rolled down from the housetop and approached him, meowing frightfully. They saw that the new cat was frightened, and told him the meowing was a joke. So, he added his own voice.

When our cat, who was ‘way too fat, slipped and rolled along the roof, the other cats laughed at him. Then an older tom who was very friendly offered to educate the newcomer. Our cat accepted eagerly.

At first, the Angora saw everything as good and beautiful. The gutter water tasted sweeter to him than milk and sugar. Well, let’s just see how long that lasts!

Then he saw a female cat and the sight of her set off strong emotions in him. When he went to greet this exquisite creature, one of the other cats bit him on the neck, causing a howl of pain. The old tom dragged him away and told him there would be plenty of females.

When our fat cat started getting hungry, he asked the old tom what they ate on the rooftops. “Whatever you can find.” replied the old tom.

The fat cat couldn’t catch anything. He was probably slow because he was so fat. Myself, I believe in keeping my weight down, within reason. I get plenty of food and don’t have to hunt any more, but I still feel it best to be moderate in my habits.

Then the Angora saw a workman in an attic room, eating lunch. He thought he’d found a solution to his hunger. There was a nice cutlet on the table.

He leaped on the table and snatched the cutlet, but the workman saw him and gave him such a blow with the broom that he dropped the cutlet and ran.

The old tom told him that food on the table was to be admired from a distance. These stray cats hunted for their food in gutters; they didn’t steal it off tables.

Then the tom said they would have to wait until dark to eat. Then they would go scavenging. Meanwhile, our hero felt weak from hunger.

The night came, bringing fog, rain, and cold. Down in the streets it was not pleasant. Suddenly, the old tom, trembling, crouched down and crept along the house wall. At a doorway he hid himself, and our friend hid as well. 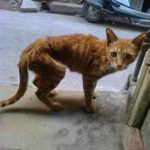 “Did you see that man with the basket and the hook?”

“If he had seen us, he would have caught us and roasted us on a spit.”

Our hero exclaimed, “The street is no place for a cat. You can’t eat but you can be eaten.”

I don’t think they eat cats in our part of the world, thank goodness. However, there are other things here that might eat you, like a wolf or even a dog. A dog probably wouldn’t eat you, but if he was a cat hater, he could kill you. These animals that run away don’t realize how many dangers there are in the world.

It took him long enough to realize what a bad choice he had made. Freedom can be as much of a prison as a real jail.

Then the old tom said, “Have you had enough?”

The old tom said he’d show him to his door, then told him goodbye. Though the Angora offered to take the tom into the house with him, the old cat said, “Shut up. You are a fool. I’d die in your warm softness. Your abundance is fine for spoiled cats. Free cats will never buy your ease and comfort for the price of being imprisoned… Good-bye.”

So the Angora went home, took his punishment for running off, and thought of the fine snacks he’d get. His master beat him, and he took a kind of pleasure in being warm and beaten at the same time. 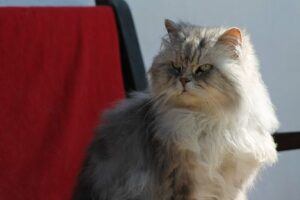 “So,” said the cat to his master, “The true happiness, the paradise, is to be locked up and beaten in a place where there is meat.”

I can understand that the cat was so glad to be home that he didn’t mind the beating he got. Now, me, I would be very resentful if the CCL were cruel enough to beat me. A beating mostly upsets and angers the cat, but does not cause him to repent his behavior.

Even though he ran off, the Angora should not have been beaten.

I have written about this issue in one of my “cat behavior solutions” stories. I guess some cats just don’t realize what an extreme decision it is to run away from home. It’s too bad there isn’t some form of cat counseling, where cats help other cats to learn, in a way like the old tom did for the Angora.

The two-leggeds say “the grass often looks greener on the other side of the fence.” Well, maybe so, especially if you are quite nearsighted, as cats often are. But it is still not necessarily a good idea to escape so you can find out. You may find yourself in a very bad situation.

2 thoughts on “Have You Read Cats’ Paradise, by Emile Zola?”