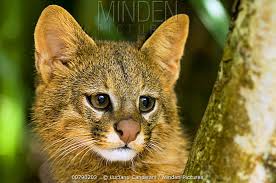 The Pampas wildcat provides a bit of a taxonomic puzzle. This wildcat from South America has habitats in several countries, and its appearance varies depending on where it is found.

The cat resembles more the European Wildcat, having a broad face and pointed ears. However, its coat often has a different appearance depending on what habitat it occupies. A little bigger than a domestic cat, it also has a bushier tail.

In the high Andes the cat resembles the Andes Mountain Cat; grey-colored with reddish stripes, broken up into spots. In Argentina, the cat grows larger, and shows more of a yellow-brown color with a muted pattern. 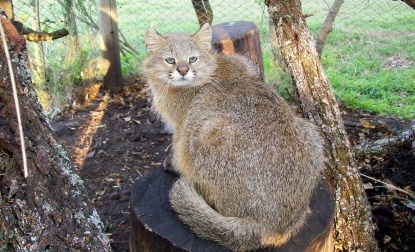 In Brazil, observers saw a young male of a rust color with dark, irregular black stripes over its entire body. When this cat grew older, the stripes could only be seen on the limbs and underparts.

Longer hair on this cat’s back formed a “dorsal mane,” with grey ears.

The cat appears in a wide range of habitats. Primarily, one can find this cat in open grasslands and humid forests. Though named after the Pampas, the animal might live in grassland, shrub land, and dry forests at elevations up to 16,000 feet.

Look for it in Patagonia, Argentina, Uruguay, Paraguay, Bolivia, Peru, Ecuador and Brazil.

Though this cat has not yet reached the endangered stage, its conservation status shows as “threatened.” Its primary threat remains habitat destruction throughout its range. Also, a reduction of its prey base lends itself to the problems facing this cat.

For a long time, hunting them for their pelts reduced their numbers. However, in 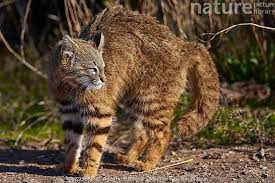 The scientific name for the Pampas cat is Leopardus colocola (previously L. colocolo) which is also known as the binomial name, species name, Latin name, biological name or zoological name. Some use the term ‘botanical name’ however that term is only applicable to the plant kingdom (botany) and not the animal kingdom (zoology). 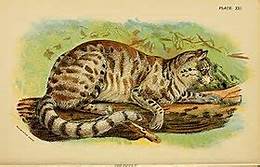 cat into three distinct species, based primarily on differences in color, patterns, and cranial measurements. Then, in 2017, a revision of felid taxonomy by the Cat Specialist Group recognized the Pampas as a single species with seven subspecies.

Then, in 2020 a further study found strong evidence for five distinct species within the full range of Pampas cats.

What does a Pampas cat eat? Though we know little about its diet, most likely this diet consists mainly of small mammals and birds. Guinea pigs probably form a large part of the diet, as well as other rodents and ground-dwelling birds.

The cats have small litters, usually one or two kittens, and occasionally three. At birth, the kittens weigh about 4.6 ounces. These cats have an average lifespan of nine years, but in captivity some have lived for over 16 years.

Because of the various habitats, these cats show a wide range of coat differences. The fur can be thick and soft in colder areas, and thin and straw-like in warmer climates.

The cat’s underparts are whitish or cream. Markings may include brown or black spots or bands. The cat can have red-grey spots or streaks, or can be nearly unmarked, except for brown bands on the legs and tail. The long, mane-like guard hairs on the back stand erect when the cat becomes frightened or nervous.

The cat has a broad head and short muzzle. It has relatively large amber eyes. Ears, somewhat pointed, show a grey-black color on the backs with a silvery-white central 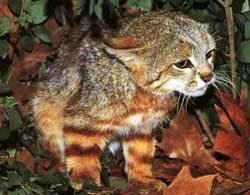 spot. Short and stout legs have markings of brown or black bars and spots. A fairly short, bushy tail at times shows markings or indistinct rings. All Pampas cats have two dark lines on the cheeks.

You can help keep this cat from slipping into the endangered classification by sending a donation to the Felidae Conservation Fund. The address of this organization: 110 Tiburon Road, Suite 3, Mill Valley, CA 94941.

2 thoughts on “Meet The Pampas: Wildcat From South America”