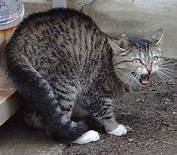 Hello — it’s Lucinda the literate cat, with a new post for you two-leggeds. I am writing something a bit different this time. Here is a review of a recent article from the blog, Catster, called Emergency Cat Restraint. Learn about the cat restraint devices that you can use in a time of need.

Sometimes I am very glad I’ve learned to read. My CCL (Cantankerous Cat Lady) subscribes to a few cat blogs, and she shares them with me. I find it interesting to read about us from a two-legged’s point of view.

This article has some helpful information for people owned by cats. However, I am not sure if you two-leggeds all understand the cat’s viewpoint on these matters. I thought it might be helpful if I made some comments from my point of view.

The article points out that safety is the most important thing to consider in an emergency situation, for both two-legged and cat. Should the cat be sick or hurt, or if there is some disaster, like fire or flood, you will want to move your cat without being bitten or scratched.

Perhaps I should first tell you that in a situation where a cat becomes very frightened, it may no longer matter how closely you are bonded with your cat. In that state of fear, the cat will forget everything except its natural instincts.

These instincts tell it that you are huge, compared to it, and therefore suddenly frightening. The message the cat receives from its instincts tells it to run away and hide.

Watch Out For Those Teeth

When restraining a cat, you are told to always have control of your cat’s head, as the cat may bite in its attempt to get away. Remember, in the cat’s agitated state of mind,

you are the enemy. You need to avoid cat bites at all costs, as the wound can become seriously infected. After all, your cat’s mouth is not sanitized.

A towel might do the trick. Drop the towel over the cat, including that biting head. Then scrape up the cat and wrap the edges of the towel around her body. One hand goes to the scruff of her neck so you have control over her head, and with the other hand and arm, hold her close to your body.

Then hang on tight. You don’t want the legs to come loose, so hold them close to your body. If you are smart, you will pull on protective clothing before attempting to pick up the cat.

When Not To Pick Up Your Cat

CCL has a story for you. She said when she was about 15, her mother learned the hard way about picking up a mad cat. Her mom and the cat had created a very close bond, so she thought the cat would react to her in the normal way.

The cat, an indoor cat, had gotten out and found another cat in his yard. Immediately he became enraged and confronted the stranger, with the intent of defending his territory.

CCL’s mother did not understand that her cat was no longer her best friend, but had reverted to a wild cat that operated by his instincts. His focus was 100% on the intruder.

The mother came up behind the cat and bent to pick him up. The cat, now in full battle mode, did not realize who picked him up, and, with a claw-studded paw, raked across the mother’s arm, laying open an artery that started spurting blood.

It was a good thing that CCL’s father was home. He got the wound bound to slow the bleeding, and loaded us both in the car to go to the hospital. He drove as fast as he could. There wasn’t much traffic, fortunately, but it didn’t take long for a police car to come behind him and pull him over.

CCL’s father hurriedly explained the emergency, and then the police car went ahead, lights flashing and siren going, and escorted them to the emergency room.

I did not know about traffic regulations or speeding or police cars until CCL explained it to me. I think it’s a good system, and am glad the police car helped them reach the hospital quickly.

A Large Bath Towel Is Your Friend

Back to the towel. When wrapping your cat up, it is ideal to have the center of the towel under the cat. Then the ends will wrap snugly around her body, so those legs with the dangerous claw-filled paws will be held close to the cat’s body.

Hold the edge behind her head closed. You will have some control over the biting head and you can keep that foot from snaking out to do its damage.

If your cat is ill, it will most likely be easier to wrap her up. As soon as you can, get her into her carrier, because then you know both you and the cat are safe.

Remember, a cat that doesn’t want to be restrained can be difficult to control. We are small, but we are flexible and strong, unless we are very sick. Even when we don’t feel well, we can wiggle our sinuous body, making us very hard to hold onto. You’d better be prepared!

Slip Lead?  I Don’t Think So

The article suggests using a slip lead to catch a cat that does not want to be touched. To use a slip lead, make a large loop that you can throw over the cat’s

head, and gradually tighten it, so the cat can’t get away.

I do not think this slip lead is a good idea. Our necks are not that strong. The slip lead makes us very vulnerable. If we have never walked on a leash, and the slip lead is tightened, we will naturally struggle against it.

This will tighten the noose, and could very possibly cut off our air completely and choke us. I just don’t feel like this method is a very good idea.

CCL pointed out an alternate method she found in a book she has called Secrets of a Vet Tech, by J.C. Farris. It shows you how to make a quick harness for the cat. Here are the two-step instructions from the book:

“To make a cat harness, use a slip lead which is simply a one-piece leash you see used in vet offices. Fit the leash over the head as you would with a dog. However, instead of tightening it around the neck, put one end under one leg, leaving the other up towards the shoulder, and pull up gently.”

“Take the portion of the leash that you have just pulled up on, and feed it over the opposite shoulder (in this case the left shoulder), under the opposite leg (the right) and feed it through the ringlet, pulling up again. You now have a harness. It is important to keep it snug. However, with the harness, the cat can be bathed or treated without choking.”

Now, here is a horrible contraption if I ever heard of one.  It is called a cat muzzle.These are designed to fit on the cat’s head. It keeps the eyes covered and the mouth mostly closed.

I am not sure I would be calm with such a contraption on me! If I just saw it and then had it put on me, I’d probably freak out. Now that I’ve read about it, I understand why it is used.

Try to explain to a cat who can’t read! They will see it as some kind of torture device and will have trouble understanding why you are doing such a thing to them. No wonder they look on the vet as the cat torturer!

Then there is the “cone of shame.” I have never had to use one, but a couple of my

cat friends have. Those devices, since they fasten around the neck, leave the cat’s face uncovered, yet she cannot bite. You are told that the cone of shame and a towel wrap is an excellent way to carry a mad cat.

Your two-legged is advised to wear thick leather gloves when trapping a mad cat. However, our needle-like teeth can often puncture these as well, so be on guard. If we are struggling because we want to get away, we’ll claw and bite those gloves, for sure.

When moving a cat in an emergency, the easiest way and the most comfortable for all concerned is a good cat carrier. Many of us cats don’t like to see these things come out of the closet and don’t like being put in there, because then we are trapped.

However, it is a safe and comfortable way for us to travel if we must.

If you have comments or questions about this post, please add them in the comment section at the bottom of the page. Now, remember to be gentle with your cat and to calm his fears as much as you can.