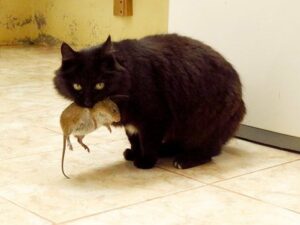 Cats often like to bring us little presents. I think that usually they believe they are contributing to the food supply by bringing us a dead critter they have caught. They consider us part of their family, and want to do their bit to help out. So, dead donations at your door can be considered gifts from a cat.

I read one article that said that often a female cat will act instinctually to help supply food, as her job as a mother involved feeding her young. However, I have had more male cats than females, and they seem to be just as motivated as the females to bring us fresh meat from their hunts.

My Cats Brought Me Many Gifts

Over my long life I have been owned by many cats, and I believe that they all contributed their share of meat for the household. Mice, voles, shrews, and an occasional rat were the usual offerings. Of course, there were some birds, too, but I discouraged the cat from bringing these. However, now and then they brought in more unusual presents.

When I lived in a small house in the country near Boulder, Colorado, my cat used to bring in little water snakes, still very much alive. I’m not sure if he meant to donate the snakes to the grocery supplies. I think he was more interested in playing with them.

When I’d try to catch him and get him to remove the snake from the house, he’d run under the furniture with it. I finally fished the “game” out of hiding with the broomstick and transported it back outside. This snake eviction did not deter the cat. Soon he’d find another one to bring in.

My cats on Spruce Island were avid hunters, and brought me many presents. They brought mostly voles, and actually did not hunt many birds. They warred with the squirrels, but I don’t think they ever killed one. However, when a weasel moved in and cussed out both the dog and the cat upon occasion, war was declared.

The two of them did their best to capture that weasel, but it proved to be hard to catch. Then, one day I found its carcass on the balcony by my bedroom door. Sam must have caught it and killed it, but he did not eat it. I felt sorry for the weasel, but of course that did the poor thing no good.

In Kodiak, the cats found good hunting. I had two cats in Kodiak, brothers, named Uptight Cat and Loose Cat. I recall the time Loose Cat brought our dog a large rat, still alive. Our dog had a visitor — the neighbor’s dog — and the two of them played with the rat, tossing it around until it escaped and ran under our travel trailer.

Loose Cat, watching their game, ran under the trailer after the rat, caught it again, and brought it back to the dogs. This time they killed it.

We had a room above the Kodiak shop, used as a spare bedroom. An outside set of stairs accessed the room. For a couple of years, two friends stayed there. They had a little black female cat named Mo.

We heated the shop below with a great wood stove. The shop had an 8″ x 12″ beam across it. We cut a hole about 12″ x 18″ in the floor of the room above. This hole was right above that big beam. It allowed the heat from the wood stove to travel upstairs to heat the room.

My cats went upstairs to visit Mo via the stairway. However, when they wanted to come downstairs, all three of them used the hole for their exit. They would drop onto the beam from that hole and then jump down.

A large glass-covered display case ran parallel to the wall, with room behind for us to walk. The case protected our privacy, as it stood in front of the door to the house proper. If you stood in front of the case and looked up, you could see that there was about three feet between it and the big ceiling beam.

The cats would drop down onto the beam and then jump to the top of the glass case, a shorter jump than to the floor. Easy enough for a cat.

One of Mo’s favorite pastimes involved rolled-up socks, which she used to carry to the hole, bring them downstairs in her mouth when she jumped, and either play with them or give them to us to play with. Eventually, we got them all returned to their rightful owner.

Loose Cat almost caused a serious incident one time when he jumped from the beam. On that day, when the shop opened for business, a customer came in and stood in front of the long case, perusing the contents.

At that unfortunate moment, Loose Cat decided to come downstairs. He dropped onto the beam and before I could give a warning he jumped. He flew right past the woman’s right shoulder and dropped onto the top of the display case, all 15+ pounds of him landing with a very loud “thump.”

The woman was quite startled, but fortunately she did not faint or have a heart attack. The cat nonchalantly strolled into the house, undoubtedly unaware of the consternation his actions had caused.

Bells Flats holds the record for the place where the largest number of unusual cat presents originated. My Siamese, Maxine, had honed her hunting skills on Spruce Island, so she found any number of small critters. One day she brought home a different present — most of a cooked pork chop. I have no idea where she found it. 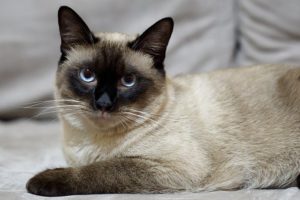 Her most unusual contribution was a live bat, brought in through the cat door one night and deposited on the bedroom floor. The bat, stunned, lay there, panting, while the cat watched it.

I picked it up by one wing-tip, and the bat immediately expanded to a full length of about a foot. I took it outside, the cat following. When I threw it up in the air and it took flight, Maxine made a soaring leap after it and almost caught it again.

After Maxine crossed the Rainbow Bridge, I waited a couple of years before getting another cat. Then I met Carlos at the Kodiak Animal Shelter, and took him home. He was a couple of years old at the time, and he lived with me for another 12 years.

Carlos’s hunting skills outshone those of any of my other cats. He started out with voles or mice, but since he didn’t like the flavor of the meat, he wouldn’t eat them. He either brought them to me or gave them to the neighbor ‘s cat, Tiger.

Then he discovered rabbits. The hill across the street from our place housed many, many rabbits. The end of the hill contained countless holes into rabbit dwellings. The riverbed next to the house also provided homes for many more. Carlos discovered he really liked the taste of rabbit-meat, and he would bring one home regularly.

He could gut a rabbit neatly and leave the entrails in a neat pile. Nonetheless, I finally convinced him that he should keep his rabbits outside. He’d invite Tiger over for dinner and the two of them would feast on the rabbit. It took them three days to eat the entire animal.

It is interesting that I’d find a pile of guts, but that seemed to be the only thing they didn’t eat. I never found feet or skulls or even that fluffy tail. The cats apparently ate the whole animal.

Our Treaty On Birds

Then Carlos started killing birds, and I tried to convince him that the birds were off-limits. Instead of stopping this activity, he would bring them in the house to me, alive.

He would take them to our sun room, which had windows on two sides and a greenhouse roof. Out there he’d

turn them loose. Sometimes they got loose in the house proper and I would have to chase them to the sun room.

Then I could open the door so they could fly out. However, a tiny bird has a tiny brain, and even with the door open, they flew back and forth from one end of the room to the other, leaving little bird-poop droppings along the way for decoration.

Finally, they would go out the door. It was a different story with the young raven that Carlos brought in one day. The poor frightened bird flew around the living room, running into things; knocking over a plant, looking for a way out.

With the broom I steered him out to the sun room. Unfortunately, I’d forgotten that Tiger slept there. He immediately came to life and readied to stalk that bird. I used my handy broom to sweep Tiger back in the living room, and opened the outside door.

The raven was sitting on the back of a chair, so I went up to him and said, “It’s okay. It’s safe now. You can go outside.” The bird seemed to understand. He didn’t hesitate, but flew across the room and out the door. It seemed to me finite proof that the raven’s brain was superior to that of the tiny birds Carlos had delivered.

Carlos once brought me a live squirrel, and turned it loose in the house so I could play with it. He then wandered off, losing interest in the squirrel. I had to chase it outside. Once I got it out to the front entryway, I had to remove everything from the room before I could get it to leave.

Carlos did bring me a couple of other squirrels after we moved to Gustavus. These he brought in dead, though, so I did not have to persuade them to leave. He didn’t seem interested in the squirrel meat. He just liked to catch them.

Cats Do Their Part As Providers

My cats always tried to do their part to help with groceries. Their desire to bring me part of their kill seemed to be deeply embedded, perhaps on an instinct level. They must feel like they really contribute something by sharing with us.

I know that at times cats can bring in all sorts of things. They find not just animals, but other objects that interest them. I would really like to hear from my readers now. If you have stories about gifts from your cats, either “food” or otherwise, please share your story with us in the comments at the bottom of this post.

If you have an indoor cat that doesn’t have a chance to hunt, your cat might like one of these interactive cat toys from Amazon. They will give your cat fun and exercise and help him stay healthy, sharp, and alert.

Please note that, as an Amazon associate, I may make a small commission from your purchase.

by The Natural Pet Co.

4 thoughts on “Have You Received Unusual Gifts From A Cat?”