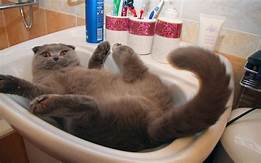 Can you tell us why cats are so weird? Cats can be rather strange creatures at times, and there is no logical explanation for some of the things they do. There are many stories about such quirky traits. Here are a few that I found online. These were from a story in The Guardian.

One of Josh’s cats woke him every morning, just a minute or two before the alarm went off. He’d wake Josh by tapping on his mouth with his paw. He didn’t tap that hard, but Josh says the claws were extended just a tiny bit. It’s pretty apparent that such behavior would wake a person up quickly.

Though the cat didn’t tap hard, he was forceful enough that Josh could feel the claws. In this way, the cat 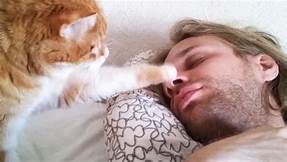 requested breakfast. Josh says he started feeding his next cat at night.

That wouldn’t work for me, as I feed my cat twice a day. No wonder the kitty wanted to get him up.

Lauren’s cat believes in getting the day off to an early start, so starts yelling at her very early that he wants his breakfast.

One morning they were awakened at 5:30 a.m. to the sound of meowing, but also to someone telling a story in an extremely loud voice.

It seems the cat had walked across their laptop, turned on a Moth podcast, and then turned the volume all the way up.

The first time it was amusing, but when the cat did exactly the same thing the next morning, they realized the problem was not going to go away. Now Lauren closes her laptop before going to bed.

Sarah has a cat named Velcro, who got his name because he used to stick his claws into her clothing when he was a kitten.

Good name for a kitten. Once when my son and I were caring for a neighbor’s two kittens in their absence, we went over to feed them.

When we arrived, both kittens ran up David’s pantlegs, one on each side. He picked them up and pulled them off and said, “Look, Mom — Velcro kittens.” 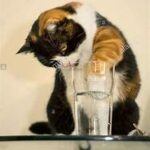 Sarah’s’s Velcro had a funny habit. People would come to dinner, or to visit, and would have a glass of water at the table with their meal, or just for refreshment. When they would leave the table, the cat got up there and stuck his paw into the person’s water glass, reaching down into the glass as far as he could.

One day Sarah’s mom caught the cat in the act. However, they wouldn’t always know if their water was cat-aminated or not. They had to start putting coasters on top of the glass when they left the table.

Rachel’s cat visited the garage when her step-father winterized the cars. Rachel was concerned that the cat had gotten automotive fluids on her fur.

Rachel decided giving her a bath seemed like a good idea, but the cat was outraged. A long time later, still damp, she got on Rachel’s lap.

Rachel thought her cat had forgiven her, but she was wrong. The cat peed on her.

A couple of years ago, when Rebecca visited their basement, she saw their cat, Luna, go into the only room in the basement that was partially furnished. The room did not have a litter box.

Since the cat normally went to the basement to use her litter box, Rebecca followed her to make sure she didn’t pee on the floor.

No, the cat had her own plan. She squatted, making sure she was properly positioned, and peed into the drain on the floor.

What a great solution! No smell, no mess, and no litter.

Before cell phones and cordless phones, Caroline’s tuxedo cat, Seymour, would answer the phone. He loved the 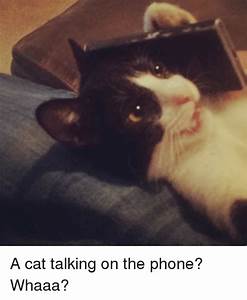 contraption, and loved to answer it. More than once, a friend told her that, when they had called, they had been greeted with a meow, instead of the standard “hello.”

Put that cat on the payroll! Caroline has acquired a free answering service.

Peter’s cat, Hunter, loves to play with crumpled paper. The cat apparently regarded the wastebasket as a box of toys for him. Whenever Peter threw a crumpled piece of paper in the basket, Hunter would dive into the basket to get it.

Usually this action would knock over the basket and spill out the trash. Then the cat had a large choice of playthings.

Jennifer says that a few years ago they got a pit bull, named it Daily, and wondered how their cats would react to the dog. When they brought Daily home, one of their cats, Stringer, went right up to the dog and stuck his head in the dog’s big mouth. The dog backed away, looking shocked.

This behavior went on for weeks. Whenever Daily was near the cat and would yawn, Stringer would put his head in her mouth.

When other dogs came to visit, Stringer would not demonstrate this strange behavior. Then one day a friend brought her pit bull over for a play visit. Before they even realized Stringer was there, he ran over and stuck his head in the surprised dog’s mouth.

Now, why on earth would the cat exhibit this behavior? Yes, some cats are really weird!

I am sure that some of you readers have your own stories of some weird behavior on the part of your cat. I’d love it if you would share your story in the comment section at the end of this post. Then the rest of us can enjoy it, too.

If you would like to read the original article, go to https://www.theguardian.com/commentisfree/ 2015/sep/06/cat-stories-weirdos-feline-oddity

4 thoughts on “Can You Tell Us Why Cats Are So Weird?”