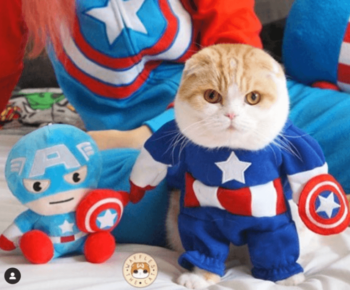 Hello, two-legged readers, from your friend, Lucinda the literate cat. My CCL (Cantankerous Cat Lady) asked me to select some more stories about superhero cats, and I am happy to do so. Read on, and enjoy learning of more of our amazing exploits. (Of course, we know what our fellow cats can do, but some of you two-leggeds do not recognize our true value.)

This first one is about Rusty, a cat who saved his owner’s life because he sensed she had a problem that needed immediate attention. Claire Nelson from Reading, Pennsylvania, adopted Rusty as an adult cat from a shelter.

Two years later, Rusty saved the day and her two-legged’s life. Claire didn’t feel well and wanted to lie down. Rusty knew she needed to get some kind of help that a nap couldn’t provide, and wouldn’t leave her alone until she phoned for help.

We cats have a built-in sense that can tell us if our two-leggeds have a health problem. You need to pay attention to us if we act in some unusual way. We may have a reason that you do not recognize.

Rusty’s two-legged, a former nurse, did not know why her cat would not just let her rest. She thought over her symptoms and decided a doctor’s office visit could put her mind at ease. Now, a cat might not choose to go to a vet voluntarily, because often he does not understand that the vet is there to help us. You two-leggeds have more sense than us in that regard.

Claire felt much worse when she reached the bus stop, so she called 911 (which I understand is your emergency go-to.) She received an ambulance trip to the hospital, where she learned she’d just suffered a heart attack. She went into surgery (It’s just as well most cats don’t understand the idea of surgery, because it would make them fear the vet even more.)

In surgery, they put in two implants called stents, that help the heart to operate normally. When she returned home, Rusty would not leave her side.

I am sure his attention and purring helped in her recovery. Claire knows she has the cat to thank for insisting she take care of her problem, and she believes the cat saved her life.

Here is a video of this story:

Terfel, an old dog companion of Judy Godfrey-Brown, developed something called cataracts in his eyes as he aged. These blurred his vision, and eventually he became completely blind.

The poor dog had trouble adjusting to this condition. He walked into walls and furniture, and eventually became afraid to move around in the house.

Enter the cat. Judy Godfrey-Brown invited a stray cat into her home. I wonder if that cat sensed that they needed him in that house. The new cat, Pwditat, became Terfel’s seeing-eye cat.

The clever kitty used his paws to guide Terfel around, in the house and outside in the garden. The two became inseparable, and even slept together.

My CCL found a YouTube video showing these two, and explaining their relationship. As you two-leggeds say, a heart-warming story — Watch the video here to see the two together:

CCL says she can relate to this next story, as it features an 83-year-old woman, the same age as she. This story takes place in Cornwall, England. When the woman disappeared, the cat alerted searchers where to look for her.

Police from Bodwell, Cornwall, praised the woman’s black cat, Piran, who let searchers know the location of the poor lady in the ravine. Tamar Longmuir, a neighbor, first discovered the woman had disappeared, and raised a search and rescue party from neighbors.

During her search, Longmuir discovered Piran, sitting on top of a gate by a cornfield, meowing at her nonstop. As the cat was very attached to her two-legged, Longmuir decided to go and search that field.

She walked around the bottom of the field, calling the lady’s name. Just as she started off the path to search the crop, she heard a very faint response to her call.

Then she realized the lady had fallen down a 70-foot ravine. She’d gone through a barbed-wire fence and fell down, landing in the stream at the bottom. She must have been injured, because she couldn’t get up; Longmuir said they thought she’d lain there for four hours.

Bodwell police offers, responding to the scene after receiving an emergency rescue call, managed to bring the woman to safety in two hours. Later, the hospital reported she had recovered from her ordeal.

The police in Bodwell had lots of help — the Cornwall Fire and Rescue Service, a specialist water rescue team, South Western Ambulance Service, and Cornwall Air Ambulance. These last people transported the woman to a hospital after her rescue.

Here is a video about this rescue:

The local police had a great deal of praise for the hero of the story, Piran the cat, writing, “Piran the cat saved the day.” No, we can’t speak your language, but we can use our own to alert you to danger.

This story points out the great value of sharing your home with a cat. You will never know when you will need rescuing. We cats can save you.

Now, would you like a good Thanksgiving story? I know the importance of that holiday to you two-leggeds, and we like it, too, as it means treats from your turkey feast for us.

Stephanie Henkel tells this story of a shy tiger cat, apparently a stray, who started coming into their garage, helping herself to their cats’ food, and running away if the two-leggeds tried to catch him. 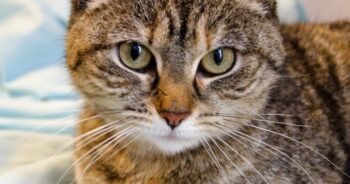 Then one night he appeared in the basement, covered in oil that must have come from the neighbor’s repair shop. The two-leggeds knew the oil would not come off by itself, so they cornered the cat in the basement, wrapped him in old pieces of their clothing, and gave him a bath.

I can imagine that task proved difficult. They shut the cat in the bathroom with food, water, and a litter box until he had a chance to dry out and recover from his bath ordeal.

The cat didn’t want to trust them, and I can understand why. If someone trapped me and bathed me, even though I needed oil removed from my fur, I would not feel very trusting. So, those two-leggeds finally let the cat back down into the basement, where he went back out into the cold night again.

A few days later, the two-legged family gathered for their Thanksgiving feast. This holiday had special significance because their son and family had recently moved to the same town. When they had all gathered, their grandson talked about his missing cat, gone for more than a month, and how much he missed his kitty.

Just then, the stray tiger cat came up from the basement and stood there staring at their grandson. The grandson, Stevie, saw the tiger cat and said, “That’s my cat!”

Tiger walked up to greet his young owner.

How the cat even arrived there remains a mystery. He had to find the right bridge to cross a river to get there. Somehow, he knew this house would answer his questions. What a happy Thanksgiving present for that family!

Many stories about cats involve their possessiveness about their territory. We cats believe in having our own territory, and we will protect that area claimed as ours from all intruders, even one as big as a bear. I have seen other stories about cats who chase off bears, and why not?

That big ferocious dog-looking creature does not belong on our turf!

Even in far-off Milford, New Jersey, house cats establish their territory, offering protection from invaders. In 2006, this New Jersey cat named Jack, declawed and weighing all of 15 pounds, chased a black bear who ventured into his yard up a tree. 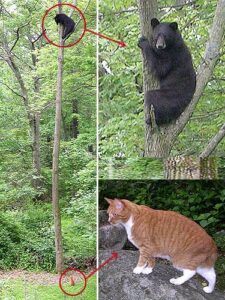 The bear, wanting to leave the scene, came down from the tree in about 15 minutes. However, Jack, still on guard duty and hissing and spitting, again treed the bear.

Finally, Jack’s two-legged felt sorry for the bear and called Jack inside.

That’s how we cats behave — we will face any threat to our territory and anyone within it. We chase off intruders and protect inhabitants from any danger, as best we can.

If you don’t have a cat, you might seriously consider employing one as a watchcat and household protector. As you can see from these stories, cats can do a lot to care for people and property. They can rescue you and protect you, or help you when you are injured. Never underestimate the value of a cat.