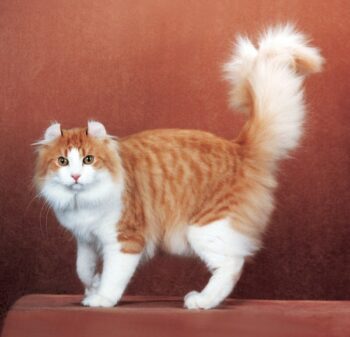 Breeders seem to be on the lookout for the newest “different” cat — Will it be the next breed the cat organizations recognize? Sometimes breeds are so new they are not yet recognized, and some are just starting to get established. This post presents the first of a series about a few of the rare domestic cat breeds, featuring five of the least-known or newest cats in town.

Sometimes this cat is called the long haired Russian Blue, or the Nebelung Blue. How

did this breed get started?

The Nebelung started by accident, when two non-pedigreed domestic shorthairs (Blue male and black female) got together and created a litter of kittens, born in Denver, Colorado, in 1984.

A strikingly handsome cat, it has an alert stance and a businesslike expression. The cat’s body is long, lithe, and slender, with a fluffy tail carried erect. It has a modified wedge-shaped head; ears set well apart, well-tufted and wide at the base. Kitty has

The coat grows medium-long, and features a dense undercoat. The eyes, green in color, do not start out that way. Kittens’ eyes start blue, then turn to yellow, and finally to green at maturity.

This robust and vigorous cat needs only moderate grooming.

Totally unlike the Japanese Bobtail, this cat’s stumpy tail developed due to the Manx gene.

A semi-wild bobtail male kitten explored a motel car park. An Iowa farmer, John Sanders, and his wife found the cat in the early 70s. They took the kitten, a brown spotted tabby, home with them and named him Yodie. There, an accidental mating occurred between Yodie and their seal point Siamese, known as Mishi. Several litters followed, which included a majority of normal-tailed kittens but a few with short tails.

Some of these kittens moved into the barn, where they bred with a cream male barn cat with white Siamese-type markings. Some of the kittens that resulted from these matings had not only the stumpy tail, but also white markings on their heads, legs, and tails.

In 1990, two U.S. organizations, the Cat Fanciers’ Association and the International Cat Association, accepted the American Bobtail for registration, with all colors and patterns allowed. However, Britain and Europe did not acknowledge the breed.

The cat can be described as a short-tailed, cobby longhair with stocky body characteristics. The cat is low to the ground; the tail should be two to four inches long, and may either bend or curve to one side. The rounded head has full cheeks, with ears set well apart. It possesses round, full, alert eyes.

As the Manx gene has proven notoriously unstable, you will have no guarantee of a bobtail. as these kittens often have a normal tail or no tail, like the Manx, rumpy-style.

The kittens like to play from an early age. They grow up to become sociable adults, fond of human company.

This cat got its name because it collapses in a limp heap, like a rag doll, when you pick it up.

The legend goes that this supposedly limp characteristic came about as the result of a road accident injury to the first Ragdoll’s mother, a white Persian, which she

somehow passed on to her kittens.

Though a genetic impossibility, the story goes that other characteristics of the cat also came about because of the accident. These include a high pain tolerance, fearlessness, and apparent lack of any survival instinct. The cat’s nature can be called exceptionally docile.

Most likely, these qualities appear due to highly selective breeding. The three kittens born to the white Persian who survived the road accident began the breed. One of these three, Daddy War Bucks, mated to a Birman, became the breed’s founding sire.

Ann Baker, a California breeder, developed the ragdoll breed in the mid-1960s. Though placid by nature, the cat appears large and impressive, stockily built with a heavy bone structure.

Males weigh from 15 to 20 pounds and females 10 to 15. The typical male height reaches to 18 inches, and its stride at full stretch measures 36 inches.

In general, the appearance of the Ragdoll calls to mind the Birman, and in fact, the cat has Birman blood in its ancestry.

Appearance details: Broad across the shoulders and hindquarters, with a deep chest. Medium-length, sturdy legs end with large, round, firm paws, tufted between the toes. The long, brushed tail starts medium-thick at the base, then develops a slight taper. The large head and full cheeks accompany a rounded muzzle on a short, thick neck.

The Ragdoll has medium-sized ears, broad at the base and round-tipped. Well-tufted, they tilt forward. The cat has large, oval eyes set well apart. Its semi-long coat, full and silky, comes with a prominent ruff and long hair on cheeks and stomach. The breed has been recognized in the United States since the 1970s by all but one of the American organizations, and in 1972 received preliminary status in Britain.

The Ragdoll does not want to fight or even protest. More likely, it might cower and hide. Because of this docile nature, choose this cat if you have children. The cat is infinitely patient, but children should be warned not to take advantage of this trait.

Because of its non combative nature, the cat responds well to an indoor life.

Grooming, particularly in summer, can prove demanding, as the cat molts heavily. His dense coat tends to knot and tangle, so comb it out and then brush frequently.

Kittens are born white and do not achieve full color or mature size for two to three years.

You can find this cat in four color point colors, as well as bi-colored and mitted varieties. The seal point takes on a pale fawn body color, shading to pale cream on the underparts. Dark brown nose leather accompanies dark brown or black paw pads.

The lilac (frost) point has an even milk-white color all over. Points take on a frosty grey-pink color. Lilac nose leather and coral pink paw pads complete the costume.

Some breeders consider the mitted variety the original and only acceptable version of the breed. The mitted cat has a white chest, bib, and chin, with a white stripe that runs from between the forelegs to the base of the tail. Front paws should have evenly matched white mittens; “boots” on the hind legs.

This cat should have an inverted “V” extending down the nose and over the muzzle to the chin, to meet the white on the bib.

The “curl” refers to the cat’s ears, which curve gently backward as a result of a dominant mutation.

Later that year, after an accidental mating, Shulasmith had a litter of four kittens, two of which had curled ears.

Shulasmith and some of her kittens debuted at a show in Palm Springs, California in October 1983. Within three years the International Cat Association had given the Curl its first recognition, and the Cat Fanciers’ Association gave provisional recognition in 1991.

Besides the ears, which are the keynote of the Curl’s unique appearance, the body and head are medium size, with a tail in proportion to the body. The cat has a muzzle that is neither pointed nor square. Eyes appear moderately large and oval, with a slight slant. A medium-long coat lays close to the body, with a light undercoat and no ruff.

First-born kittens do not have curled ears, but within a few days the curling begins, ending at about six weeks, with the ears tightly wound. They then begin to loosen, reaching their adult state at four to six months. The degree of final curling varies with individuals.

Neiman-Marcus developed a reputation for their “his and her” novelties, offered each year in the Christmas catalog. In 1986, the Christmas offer was the California Spangled Cat, a jungle-type cat for America’s top people.

The California became the result of a ten-year breeding program started in 1971 by a Hollywood script writer and a leading cat geneticist.

Mixing several pedigreed and non-pedigreed domestic cats, he aimed at producing a

spotted cat with all the characteristics of a wildcat, but with the ability to adapt to domestic life. According to the breeder, one of the objectives dealt with creating a memorial to all the wildcats slaughtered over the years for the fur trade.

Originally marketed at $1,400. the California attracted the interest of moneyed cat fanciers, but as yet has not been recognized by any of the cat fancy organizations.

Picture a long, low-slung cat with a long, tubular but well-rounded body and strong legs. The cat has a blunt-tipped tail, with a medium-sized head and slightly rounded forehead; muzzle appears wide and full. Medium-sized ears set high on the head, and eyes are medium-large, almond shaped and set wide apart.

The cat’s short coat feels velvety; spots cover the back and flanks. Markings continue on the legs in the form of bars, and the tail should have at least one dark ring.

Cat fanciers rich enough to own one report that this animal demonstrates super intelligence, with an even temperament. The recommendation for care calls for twice-weekly grooming.

Kittens, born black, develop their markings as they grow.

This article will be followed soon by a second post about rare breeds of cats. Be sure to watch for it.

If you would like your own copy of the reference I used for this post, you may go to Amazon via the link below and order your copy. Please note: I will receive a small commission for this purchase.

The Encyclopedia Of The Cat

2 thoughts on “Here Are Some Rare Domestic Cat Breeds”