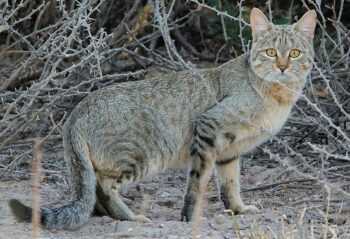 If you have wondered about the origin of domestic cats, you may find this history a bit confusing. The domestic cat (Felis catus), member of the Felidae family, is one of the most recently evolved species. This family is divided into three genera:

The classification of the Felidae family is not easy, because species characteristics are remarkably similar. For example, even the experts find it extremely difficult to tell the difference between the skull of a lion and that of a tiger.

There are some common features. All cats evolved as predatory hunting mammals. In fact, Felidae are the most highly developed carnivorous hunters of all mammalian species. They all have a keen sense of hearing, sight and smell.

Some anatomical characteristics such as the rounded head and the skeletal structure indicate that all the 37 recognized species of Felidae evolved from a common ancestor. This ancestor probably lived in Asia around ten to twelve million years ago.

Cats Migrated To Most Regions of Earth

By three million years ago, a wide variety of cats could be found in all regions of the earth except the Arctic, Antarctica and Australia. Conditions such as the rise and fall of sea levels over the millennia helped with two things:

1) Created conditions where Felidae could migrate to other geographical locations

2) Once relocated, changes in sea levels tended to isolate the species, allowing them to develop over time.

The early cats probably made this migration easier because they tended to disperse and select their own territories. Also, they followed whatever prey they hunted.

The earliest human grave which included a cat is from Cyprus, about 9,500 years ago. Here, the cat had been deliberately buried with the owner. It is assumed that domestication began some time before, because Cyprus had no native cats.

Cats began to interact with humans about 10,000 to 12,000 years ago, in the Fertile Crescent. Here, humans began developing agriculture, and the storage of grain attracted many rodents. These in turn attracted the cats, who moved in as well, to hunt these vermin. Cats more tolerant of humans became the first to come close to settlements.

The Taming of Cats

It is believed that the true taming of cats began around 3,600 years ago in Egypt. Skulls of cats found in Egyptian burial grounds have been identified as Felis sylvestris lybica (classified in some texts as Felis lybica lybica.) This African wild cat is now thought to have been the major ancestor of

Cats, due to their value in saving vital grain supplies, became a deity in the form of the cat goddess Bastet in Egypt around 2,900 years ago. By 2,000 years ago, evidence notably increased, spreading cats throughout Europe.

When Did Cats Receive the Felis catus classification?

The domestic cat received its classification as Felis catus in 1758 by Carolus Linnaeus. However, it is suggested that the domestic cat should really be regarded as a subspecies — Felis sylvestris catus — and some do use this term.

Even though “domesticated,” the modern cat has not undergone any major changes from

domestication. Their form and behavior is still very similar to that of their wild cat ancestors.

They are still perfectly capable of surviving in the wild. In fact, some cats revert to a feral or wild existence. It is perhaps one of the attractions of cat ownership. Though the cat is tame, it retains many of the characteristics of its ancestors.

Cats can survive with a very low water intake; their relatively dry feces minimize water loss. They can tolerate extremes of heat better than we can. As a domestic cat tends to be active both during the day and at night, there is very little change in body temperature during a 24-hour period.

Though domestic cats and their wild ancestors may be quite similar physically, there are a few differences. Wildcats were and are typically larger than their domestic kin, having brown, tabby-like fur. It is necessary for wildcats to have camouflage that keeps them inconspicuous in the wild.

Once cats became domesticated, the selection for more interesting color combinations became part of the breeding program. Now we have our range of cat breeds that are quite beautiful.

Since cats and humans formed a mutually beneficial relationship, it could be said that cats domesticated themselves. They liked their new lifestyle, living among humans and having great hunting close at hand. They probably received table scraps and perhaps protection from their human family. They received great rewards for allowing themselves to be tamed.

In Egypt, early cats’ popularity reached a peak between 1950 BC (first cat appears in Egyptian art) through the Roman period. They were protecting vital food supplies, so they became the equivalent of gods in ancient Egypt.

A common Egyptian practice included the mummification of cats as sacred offerings. It is reported that by around 600 BCC, thousands had been mummified. People bred them in order to make them into mummies that others could buy to make an offering to the gods.

Interesting that a study showed that the mummies had the same DNA sequence found in cats from the Middle East. Cats living in Egypt today have the same sequence as the mummies, so these could probably be considered their ancestors. That makes these cats descendants of the cats of the Pharaohs.

This study gives the first genetic evidence that domestic cats had been sacrificed in ancient Egypt, and further supports the theory that domestication occurred during this period.

The domestic cat’s path has not always been smooth. In the Middle Ages, during the 1200s and 1300s, cats began to be associated with witchcraft, causing many cats to be killed. At the time, people thought they were evil, and an incarnation of the devil. This purge lasted for centuries, and by 1700, cats had all but disappeared in certain areas.

What brought cats indoors? The majority of cats as indoor pets is a very recent development. The reason: Kitty litter wasn’t invented until 1940.

As cats and dogs legally had no value, not even considered as property, something had to change. Now, they are legally protected as property, and have additional protection under anti-cruelty laws and natural disaster evacuation laws. These latter came into being after Hurricane Katrina.

One of the reasons we find cats so appealing, I believe, is that, while being domesticated and becoming a welcome pet in the family, the cat is still little altered from its wild relatives. We see them exhibit many of the same traits as we can find in wild cats.

Thus, we can enjoy the benefits of an animal who is both wild and tame. When the cat saw an advantage to living with humans, he moved in. One of my references for this post, pethealthnetwork.com, put it well when they stated, “In many ways, we didn’t domesticate cats; they domesticated us.”

6 thoughts on “Do You Know The Origin Of Domesticated Cats?”