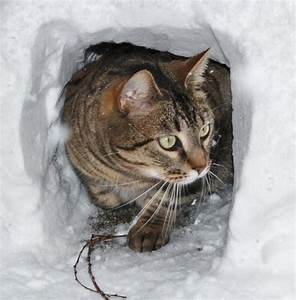 If you live in a climate that includes a snow season, could you please answer for us the question in the title: Snow and cats — do they mix?

I came across a story yesterday about a cat in Switzerland who wandered away from its owners and ended up following hikers to a 10,000 foot snow-covered mountain summit. The hikers finally passed the cat on to a group going down the mountain, and they managed to reunite the cat with its family.

When Cyril and Eric Rohrer climbed Mt. Britsen in Switzerland recently, a lost cat joined them. Evidently the cat felt safer with those hikers than trying to find its way home on its own.

The cat, lost for four days on the mountain, apparently decided to join the hikers as its best choice for rescue from its situation. At about 4:30 a.m., the hikers heard the cat meowing in the dark forest. They said she sounded really scared and confused.

She joined the hikers, who carried her at times when she seemed really tired. When they first found her, she shivered, and her paws had begun to bleed from the hard snow.

Poor kitty! She deserved to get a ride!

Apparently this trip repeated an earlier adventure. During the four days she went missing, she had already followed another set of hikers up to the mountaintop.

Fortunately for the cat, the Rohrers eventually found another group of hikers going down the mountain, and passed the cat over to them. This group took kitty down the mountain and found her owners.

Cyril Rohrer said, “Animals do weird things. And they are ‘way tougher than humans. They’ll never give up. Even though they are hurting really really bad.” Persistence finally paid off for this poor cat, and all turned out well.

Of course, in Alaska, we have lots of snow, and my cats have held various opinions about it. In Kodiak, my cat, Carlos, loved the snow. He would hunt in the river bed for rabbits, and never seemed to mind the snow.

I worried about him because of his stunning black coat, which stood out quite 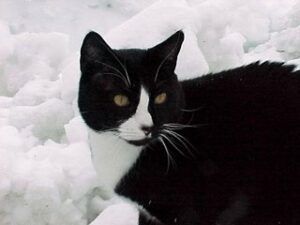 distinctly against the snow background. The eagles patrolled the river bed regularly, looking for a meal. I’m amazed and fortunate they never tried to carry Carlos off with them.

Here’s one of my favorite pictures of Carlos in the Kodiak snow:

Of course, Carlos did not get lost in the snow, and if he got too cold, he had a cat door into the warm house. He could enjoy the snow with no danger except for those hunting eagles.

This little episode in Switzerland is one of many stories you can find online about cats and snow.

Why would a cat follow hikers? It seems to me like a pretty smart idea. Kitty must have decided the hikers knew where they headed, and staying with them seemed like a good idea.

When cats first experience snow it must seem very unusual to them. What were all those white flakes falling down? Could you play with them? Eat them? Sometimes a cat’s reaction to snow will make you laugh, as they try to grab the flakes or get wired for some serious play-time.

Usually, though, because cats seek warmth rather than cold, cats and snow do not mix so well. Therefore, it’s best to keep a cat’s snow-time to a minimum.

Here’s another YouTube video showing cats at play in the snow. They do seem to enjoy the experience.

Even if you do not usually have a litter box in your house, it’s good to keep one during snow season so the cat does not have to go outside for bathroom purposes.

When the snow comes, observe your cat to find out how he reacts to it. If he enjoys playing in it for a time, by all means let him enjoy. However, if the snow seems to intimidate him, it’s better to keep him inside.

Let us know your cat’s reaction to a snowy winter. Will he become a snow-bunny, or will he seek the warmth of the inside heater?

What do you think about snow and cats — will they mix?