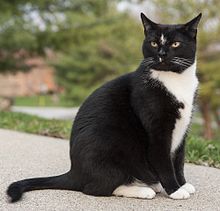 Similar to their British and European cousins, the American Shorthair cat is derived from the domestic cat. The difference: In Britain, the shorthair has been around for at least 1,000 years, but has only been established in America for about 400 years.

It is noted that the American Indian probably did not domesticate one of the numerous native North American cat species. It was likely that the reason is lifestyle. Indians were not farmers, so didn’t need cats to keep down vermin. Rather, they were predominantly a hunting and fishing culture, so their nomadic lifestyle did not lend well to including cats.

Therefore, the first domestic cats in North America arrived with the European settlers. Some of these cats mated with feral longhairs, and the Maine Coon breed was started.

Cats found a place with early settlers, keeping barn and grain stores safe. As farms moved westward, their cats went with them. Thus the domesticated cat population spread across the country.

Being tough, the shorthairs endured the harsh winters. Their hunting skills kept them from going hungry. As they spread through the land, roaming and breeding freely, they developed a range of colors and markings, though many of them displayed tabby patterns.

In the early days of cat shows, no pedigree was necessary for registration. A class for shorthairs was listed in the first American cat show in 1895.

About 1900, an American breeder named Jane Cathcart brought a British Shorthair that was an orange male tabby. This shorthair 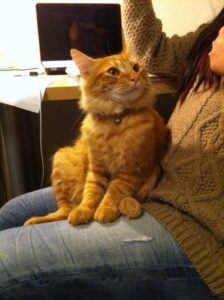 became the first pedigreed shorthair to be registered by the Cat Fanciers’ Association. Then, Miss Cathcart imported a second cat, this one being a male silver tabby.

Then, in a bit of a mystery, Miss Cathcart registered the first American-born shorthair in 1904. She claims it was of “unknown parentage.” She started a process which is still permitted in some U.S. cat clubs of registering a non-pedigreed cat in the American Shorthairs if they met breed standards.

This practice was accepted by the Cat Fanciers’ Association, and in 1971, a non-pedigreed cat was voted Best American Shorthair of the Year. By this time, the breed had become an established favorite in American cat shows. The breed is not recognized in Britain.

The breed name caused some dispute, and in 1966, most cat clubs finally accepted the term, “American Shorthair.”

American taste took breeders in a different direction than from the 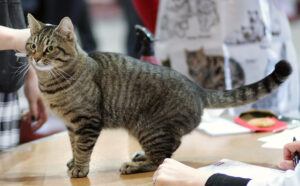 British Shorthair. This difference has been aided by interbreeding with native cats. The American Shorthair is built more lightly. Though lighter-boned, it is more muscular. The coat is short and hard, less plush than its British counterpart. This American coat thickens in winter.

The typical weight of the American Shorthair is 14 pounds for a male and 10 pounds for the female. The Cat Fanciers’ Association places emphasis on power, endurance, and agility — features which have made the Shorthair a survivor.

This cat breed has a large to medium body size, which is lean, hard, athletic, and powerful. This body is designed for hunting, climbing, and jumping. The chest and shoulders are well-developed, while the medium length legs are sturdy. Paws have heavy pads and are firm, full, and rounded.

The tail is of medium length, wide at the base and then tapering to a blunt tip.

The head is large, with a full-cheeked pleasant face, longer than it is wide. The medium-long nose is uniform in width but has a gentle 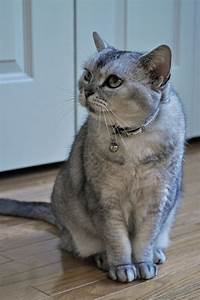 curve when seen in profile. The square muzzle comes with a firm, well-developed chin. The medium-long neck is thick and muscular. Ears, set wide on the head, are medium-sized with slightly rounded tips. The eyes, set wide apart, are round and bright, which gives the face a bright, alert look.

Both the British and American Shorthairs are the perfect domestic cat. They are hardy, intelligent, affectionate, and home-loving. The cat has a placid personality, a quiet voice, and likes a quiet life. Only a little grooming is required.

These cats breed easily, with the average litter size being four. The mothers are patient and attentive. Kittens open their eyes at 9 to 10 days, and are usually healthy and adventurous.

This cat is accepted by shows in black, blue, red, cream, and white. The blacks should have a dense coat, black from the roots to the hair tips, with no rusty tinge. In this black cat expect brilliant golden eyes. Paw pads are black or brown and the nose is black. The red is a clear deep color with no shading, marking, or ticking. The lips and chin should be the same color as the cat’s coat. Paw pads and nose leather should be brick-red. The eyes, again, are brilliant gold.

The cream should be one even shade of buff-cream. There should be no marks. Hair color goes to the roots. Paw pads and nose are pink, and the eyes are brilliant gold.

The white should be a pure white. Paw pads and nose leather are pink. The eyes can be deep blue or brilliant gold, or at times one eye is blue and one gold.

The pride of the American Shorthair could be said to be the silver classic tabby. Remember that a silver tabby was the second cat 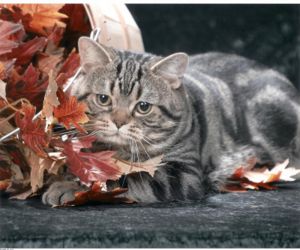 imported to America in the early days of this breed. For a silver tabby, there should be dense black markings on a silver bodied cat; lips and chin are pale, clear silver. Paw pads are black while nose leather is brick-red. The eyes are either green or hazel-colored.

3. Cream Tabby: Ground color is a very pale cream with buff or cream markings for contrast.

5. Patched Tabby (or tortie): Silver, brown, or blue classic or mackerel tabby with patches of red and/or cream. Tabby markings run through the light and dark areas.

A basic tortoiseshell has black with well-defined patches of red and cream, well-broken, on the body, legs, and tail. It is desirable to have a red or cream blaze on the face. Paw pads and nose leather are brick-red and/or black; eyes are brilliant gold.

In Britain, the cat they call tortoiseshell and white is what we call a calico in North America. This cat should be white with clear-

colored patches of black and red. Underparts should be predominantly white. Paw pads and nose leather are pink; eyes brilliant gold. In a dilute calico, the black and red are replaced by blue and cream.

Chinchilla: This striking cat has an undercoat of pure white, with black tipping on the back, flanks, head, and tail. These markings give a sparkling silver look.

Legs may be lightly tipped, but chin, ear tufts, stomach and chest should be pure white. Paw pads are black; nose leather is brick-red. Eyes may be green or blue-green.

The shaded silver is a darker version of the chinchilla. On this cat, the undercoat is white and has a mantle of black tipping, shading down from the sides, face, and tail. The color is dark on the ridge to white on the chin, chest, stomach, and under the tail.

The shell cameo has similar tipping to a chinchilla, but its color is red on a white undercoat. Paw pads and nose leather are rose pink and eyes are brilliant gold.

Smoke pattern colors permitted are black, blue, cameo (red smoke) and tortoiseshell. The cat in repose should appear the color of the tipping. The undercoat is white but the tipping is deep.

A standard bi-color is white with unbundled patches which can be black, blue, red, or cream.

I thought you might find it helpful to know the types of tabby patterns you could find. These patterns are found on many breeds, not just the American Shorthair. So, it might be helpful if you could recognize them. 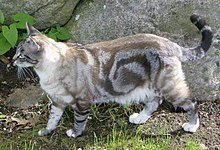 1) Classic: Pattern of whorls ending with a “target” on the side of the cat.

2) Mackerel (striped): These cats have striped rings around their tail and legs, a “necklace” of stripes down the front of their chests, and bands of either solid or broken stripes which run down the sides of their bodies.

3) Spotted: An example is the ocicat or the American Bobtail.

4) Agouti (ticked): These involve different bands of color down the length of the cat’s hairs.

The American Shorthair is one of many breeds that accept a tabby pattern or some variation. Notice the M on the cat’s forehead. This mark is a distinctive tabby feature.

For a nice pet to add to your family, you can’t go wrong with an American Shorthair.