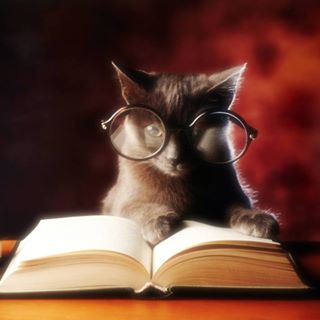 Hello from Lucinda, your literate cat. This week I am reviewing a short story called Plato: The Story Of A Cat, by A.S. Downs.

This story is so short that you need to read between the lines to get the full picture.

Plato is the name of the handsome black cat who is the central character in the story. As we first meet Plato, he is walking down Main Street as if he owned it. He crosses the street and stops outside an open window.

A lady sitting inside speaks to him, but he ignores her. With his paws on the windowsill, he looks around the room, seeming to make up his mind about something.

Then he jumps in the window. I am guessing that he had been by this house before, often enough to make a thorough investigation of the place and to get some idea about the people who lived there.

In other words, the cat had just about decided this was to be his new home, and took a look inside to see what the interior of the place looked like.

Cats looking for a home will select one they like whenever they can. They like to look 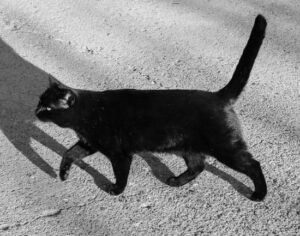 over the two-leggeds and the house they live in. Then they make their decision as to whether this place would suit them.

Plato had already decided that, so in he jumped.

My CCL can give you a good example of this behavior. She has told this story more than once. Her last cat, Carlos, had been living in an animal shelter. The CCL visited three times before deciding to take Carlos home.

On the third visit, CCL stood at the tall counter in front of the animal shelter office. She had her arms stretched across the top. Carlos jumped up on the counter, stepped between her outstretched arms, laid down, and started purring. That was the deciding factor. CCL took Carlos home.

I arrived a couple of years ago, when a friend of the CCL came by and asked if she would take a little black cat. CCL adopted me, and I have been here ever since.

Pogo has yet another story. He was in the shelter, and as the CCL had known him for a long time before his shelter residence, she decided to brighten his last days by getting him out of that place. Pogo’s attitude has been one of gratitude, as he hated that place.

Back to Plato. From the time Plato made his entrance, he took his place as an important family member. He was nice to everyone but gave his love to the lady that he first saw. Now, though he listens to all conversations, he only really pays attention when his special lady is talking.

Cats who are friendly usually like most or all the family members, but will single out one person in particular to bond with. From that time on, that person belongs to the cat, and the animal will do whatever it takes to keep that very important person happy. Cat love is unconditional.

Like most cats, lots of noise bothered Plato. He did not approve of the dustpan or the broom. Plato took to finding another room to stay in when his favorite room was being cleaned.

In our house, it is the vacuum cleaner that startles us into hiding. That thing is entirely too noisy. CCL says it cleans the floor really well. I am concerned that at some time it might just suck me up along with the dirt, so I stay out of the way. Pogo hides under the bed.

Plato was given a special Christmas present, a luxurious basket just large enough for him, with a canopy and soft cushions. Plato loved his basket — his own piece of furniture — and guarded it fiercely.

If other objects were put in his basket, he threw them out immediately. When the small girl in the family put her doll in the basket, the cat’s stern looks and formidable approach caused the little girl to snatch her doll out to safety. 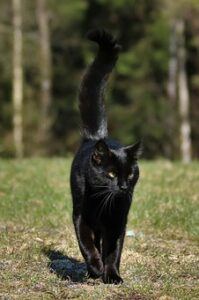 Then something unusual happened. One cold afternoon, he came walking up the avenue with a scruffy yellow kitten dragging herself behind him. You could count her bones, because she was so thin. She’d been pulled and kicked until there seemed to be nothing left of her but length and dirt.

Plato knew how to open one of the shed doors, so he jumped up and opened it, coaxing the kitten inside. The kitten laid down on the floor and Plato began washing her. Members of the household who observed this rescue brought the newcomer a bowl of milk.

Plato seemed to enjoy this new role of mother, being pleased to see his new charge fed. Once lunch was finished, the kitten helped in the cleaning-up process, and soon she looked much more respectable.

Male cats often take on the role of mothering when necessary. CCL tells of a male cat her mother had who helped the resident female with her large family. When the mother moved the kittens to a new spot, which she did more than once, the papa cat helped her carry them to their new location.

When the CCL lived on Spruce Island, she had a big male cat named Sam who took his mothering role very seriously. He raised and trained a puppy who had joined the family. When the CCL brought home two feral kittens, Sam took over the mother role and taught them about life on the beach.

He was very strict with those kittens. When they were little, he would not let them go

down to the beach by themselves, as a big bird could fly down and scoop them up. If there was no one down there to kitten-sit, Sam would chase them back to the house.

He would do the same thing when CCL, the dog, Teddy, and Sam would go for a walk in the woods. Sam would not let the kittens come along until they were about a year old. He would chase them back under the house.

Now, to Plato. After the yellow kitten was clean, Plato tried to convince her they should leave the shed. He looked at her and then at the parlor door, then bent to her little torn ears as if whispering, urging her to follow. But she did not move.

She was very comfortable in that shed. Compared to other places she had lived, she found it cozy and it felt safe. But Plato would not be denied. He picked her up by the back of the neck and carried her into the house.

He dropped her next to his cherished basket. Now he had to make a momentous decision. What would he do with her? He had never allowed anything in his basket with him. He seemed a bit uncertain. The basket was nice and warm and he was tired and cold.

Should he share his basket with a little stray kitten, still a bit dirty? She would find the rug softer than any bed she had ever used. Should he let her in his soft, clean, cushy basket?

As he considered, he finally decided there was really no choice. He had brought the creature home to protect her and give her a better life. He picked the kitten up and put her into his beautiful basket, curled next to her, and began the healing process of love.

Cats are superficially very selfish creatures. We put our needs and desires above all others. However, in some situations, we cats seem to lose some of this self-centered behavior, and consider the feelings and circumstances of one other than self.

CCL tells the story of Carlos, who loved the neighbor’s cat, Tiger. The two were inseparable. In fact, Tiger spent most of his days in Carlos’s house. The two would hunt together and play together.

Then a neighbor’s dog attacked Tiger and injured one of his back legs. He could no longer hunt. His family kept him in a cage for several weeks so he would heal.

When Tiger finally came back to our house, Carlos immediately tried to start a mock battle. When Tiger hissed at him and cried in pain, Carlos had to rethink his actions.

He realized that his friend had an injury that hurt him.

From then on, Carlos would hunt for Tiger. He’d bring Tiger voles and mice. Carlos didn’t really like the taste of the meat, but Tiger loved it. Carlos would bring them in the house and with a little chirp or two, give the catch to his friend. Tiger dispatched them immediately, enjoying the treat.

Carlos’s actions came from a desire to do something nice for his injured friend. His actions were similar to those of Plato. He did not need to hunt for his friend but he wanted to help in some way.

It would be nice to know the rest of the story of the little yellow cat. Did she grow up to be a strong, beautiful animal? I am guessing that, with Plato’s help, she grew up to be healthy and beautiful in her own way.

What are friends for, if not to help out now and then?

If you liked this story, or if you have had an experience with a cat that showed a sense of compassion or caring, please share your story with us in the comment section below this post.

2 thoughts on “Plato, The Story Of A Cat”