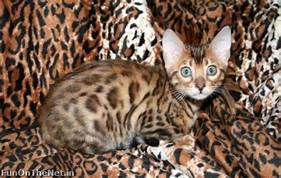 Cat breeders can spend years perfecting cross-breeding. Now they have come up with domestic cats that look like large wild cats, only in a small cat package. Here are seven exotic domestic cat breeds from which you can select. 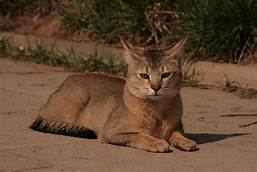 The Chausie has an early history, dating from the days of ancient Egypt. The name came from the Latin name, “felis chaus,” which translates as “jungle cat.” Ancient Egypt prized these cats because of their natural hunting ability and their calm personalities. Many mummies have been found of this cat, buried with the owner.

One of the largest domestic cat breeds, they have been mated with domestic cats, such as the Abyssinian. The breed is a hybrid of the jungle cat found in Asia. It looks like a miniature mountain lion. 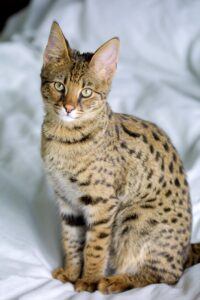 This cat’s lineage comes from a hybrid cross between an African Serval and a domestic cat. Its name comes from the habitat of its wild cousin, the Serval.

This cat is tall and lean with long legs, big ears, and a large neck. A smaller version of the African Serval, its coat shows the typical spotted pattern along with some bars, and a golden or tawny background.

Though a relatively new breed, the Savannah has become popular rather quickly. North America and Europe have dozens of Savannah breeders.

Because of their hybrid ancestry, some cities and states prohibit ownership of these cats. Check to insure if this exotic pet is allowed.

This cat gives affection freely and gets along well with adults and children. 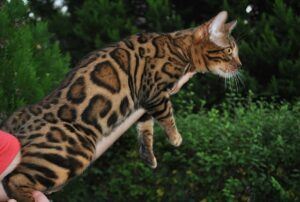 This exotic cat, a favorite among many cat owners, is probably the most established breed of the seven listed here.

The cat originated as a hybrid of a domestic cat and a leopard cat (Prionailurus bengalensis). Though it looks very much like a domestic cat, it has larger eyes, pronounced whisker pads, longer legs, and brilliant leopard-style markings. It looks like a miniature leopard.

Though this cat looks like a wild cat, some owners say they find it as loving and friendly as any domestic cat. Lively and people-oriented, this playful cat has its own generous dose of feline curiosity.

The cat will form strong bonds of love and loyalty with its family. An athletic and agile cat, he loves to climb, and will find the highest point in the room that he can reach.

A very intelligent cat, the Bengal learns quickly. It can learn tricks you would rather it did not know, such as turning light switches on and off, opening doors, and flushing toilets.

The cat likes to play in water. He especially likes running water and may require monitoring to make sure he causes no flooding by turning on a faucet that he never turns off again.

Current Bengal standards require the Bengal to be at least the fourth generation to ensure a mild, docile temperament and a happy, healthy pet. 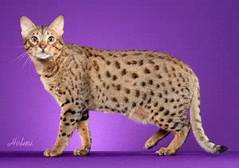 This cat’s spots make the animal look like it belongs in the jungle. Because feline enthusiasts always hold the wild spotted cats in awe, breeders developed the ocicat to have the same wild spotted beauty but with the predictable disposition of a domestic cat.

The Ocicat originates from interbreeding of an Abyssinian, a Siamese, and an American shorthair. It has the distinction of being the only domestic breed selectively bred to emulate cats of the wild.

A large cat available in 12 colors, the Ocicat has an athletic appearance, with a solid, well-muscled body. Its short, tight coat has a satin sheen.

The breed received recognition in 1966, and reached championship status 20 years later, in 1987. The cat resembles a dog in that it has absolute devotion to its people.

Though bred for spots, this cat also comes in four other patterns: ticked, classic tabby, solid, and pointed. No matter what the coat color, all these cats have a personality designed to capture your heart.

In this YouTube video, you will see a few of these exotic domestic cats in action. The one cat not included in my choice of 7, the Bombay cat, gives you the choice to own a miniature black panther lookalike. 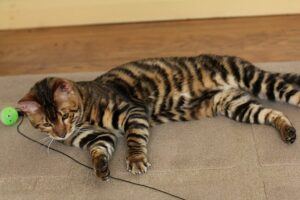 With this cat, you will come the closest to having a domestic cat that resembles a tiger. However, you might find its looks deceiving. The cat has a friendly, playful personality. It loves spending time with its people, and gets along with children as well as with other pets.

The Toyger’s superior intelligence makes it easier to train.

In the beginning, breeder Judy Sugdon developed the Toyger by interbreeding a cat with the round head shape of the tiger, a striped domestic shorthair and a Bengal. Combining with other breeders, Sugdon’s work helped advance this Toyger breed.

The breed received acceptance from TICA (The International Cat Association) in 1993. It gained full recognition in 2007. 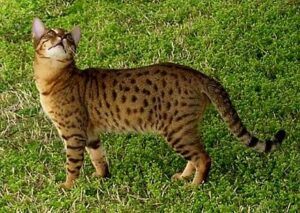 This large shorthaired cat originated in the United States. It has a friendly intelligent, inquisitive and energetic temperament.

Though these cats have a wild appearance, their breed’s foundation goes back eight generations. Now they love to spend time on your lap, happy to curl up with you on the couch.

No light-weight cat, the Cheetoh weighs in at more than 20 pounds. Their size makes them among the largest cat breeds ever developed. As the breed has not been around for long, the cat also ranks as one of the rarest.

The cat originated from a crossing of a Bengal cat with an Ocicat. Though many cats seem to select one person to bond with, the Cheetoh likes to develop friendly relationships with everyone in the family. 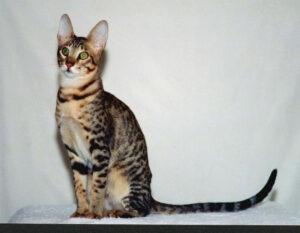 The Serengeti, a mixed breed cross between the Bengal and Oriental shorthair, developed from an attempt to create a cat that looks like the wild Serval, without having any Serval lineage.

This cat, super athletic, needs daily exercise and play time. You need lots of space and at least one large cat tree. Shy at first, once they bond with you, they become super loyal.

Expect a lot of conversation from this cat, as he is very vocal.

The Serengeti weighs somewhere between eight and fifteen pounds. It loves to climb to high places, where it can view the world below. Though spirited and energetic, this loving breed forms very strong bonds with its humans.

Its coat can develop in either golden or gray colors, but always has the eye-catching leopard-style spots and markings.

As you can see from this post, if you want a small version of your favorite wild cat, you can find it. These seven represent only part of the wild cat lookalikes, but give you some good choices to choose from.