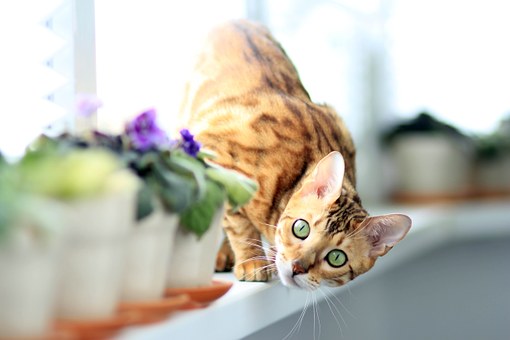 If you are not familiar with these exotic Bengal cats, you are in for a treat.  They are beautiful animals.  The cat is part of a domestic breed developed to look like a miniature version of a wild cat.  Bengal cats were developed by selective breeding, crossing hybrids of the Asian leopard cat with domestic animals.  Their goal was to create a confident and friendly cat with vivid markings.

Typical Markings of the Bengal Cat

These cats are marked with large spots, stripes, rosettes, or arrowheads, with a light-colored or white belly.  Body structure is similar to the Asian leopard cat.  This breed is smart and active.  They are friendly and talkative.  After the many cross-breeds, the cat has the temperament of a domestic cat.

Their color is usually a bright orange to brown, but they can also be found with a pale or white coat.  These Bengals are known as “snow” bengals.

Early History of the Development of the Bengal

This cross-breed cat was first mentioned in 1889.  However, the earliest confirmed cross between an Asian leopard cat and domestic cats was in 1934.

In the 1970s, a scientist, Willard Centerwell, bred these cats to assist in his genetic studies.  The cat is apparently immune to feline 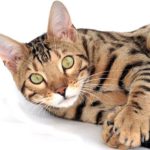 leukemia.  About that time, the American Cat Fanciers Association accepted the cat as a breed.

In 1983, Jean Mill worked for recognition of the breed by the International Cat Association.  Then the cats began to be shown in cat shows around the world.

The cat’s wild markings include large spots, stripes, rosettas, and a light or white belly.  The rosetta spots occur only on the back and sides, and stripes are elsewhere.  Its eyes are large and usually a bright blue or green.

The generations of cross-breeding have produced a cat with a gentle temperament.  However, for best results, when kept as a pet, the Bengal should be at least  four generations removed from the leopard cat.

Bengals are said to like water.  They require a lot of attention, and can be quite talkative.

They  enjoy playing and can jump very high.  They have been recorded as jumping over four feet off the ground.  They become very attached to their owner, and do not like to be left alone for long periods of time.  Perhaps if you are getting a Bengal, it would be best to get two, so they have companionship.

Be Aware of These Health Issues

Unfortunately, Bengal cats are prone to several genetic diseases  One of these is Bengal Progressive Retinal Atrophy.  There is an inexpensive, non-invasive test that is easy to do to check for this disease, and it should be done to all Bengal cats. 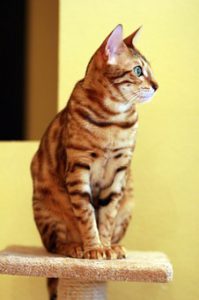 This disease causes the destruction of the cells that register light in the back of the eye.  The cell loss begins when the kitten is about seven weeks old and slowly progresses.  Vision can become quite poor by the time the cat is two years old.

The rate this blindness develops will vary.  Blind cats have more difficulty at night.  Sometimes they become very vocal and more attached to their owner.  The pupils of their eyes may become dilated, and they tend to carry their whiskers more forward.  Once the cat gets to know his surroundings, he can function normally and is quite active.

Bengals are also prone to a type of anemia known as Erythrocyte Pyruvate Kinase Deficiency  (PK – Deficiency).  Again, there is an inexpensive test you can do to determine if your cat has this problem.  This is an inherited anemia, and insufficient action of this ezyme causes loss of red blood cells.

This anemia is intermittent.  Age and onset are variable.  Symptoms can include severe lethargy, weakness, weight loss, jaundice, and abdominal enlargement.

Hypertropic Cardiomyopathy (HCM) is the most common cat heart disease.  In the Bengal cat, this is also a common genetic disease.  It is suggested that these animals be examined every year to monitor the heart.

The Bengal sheds very little, making grooming easy.  They are very good at self-grooming, though vets suggest giving them a combing once a week to keep the coat healthy.

Some mating combinations can produce a Bengal with a semi-long coat.  In 2013, the New Zealand Cat Fanch register gave “preliminary” breed status to a long-haired Bengal cross-breed that they called a Cashmere.

In another cross-breeding experiment between a Bengal and the Ocicat, two spotted breeds, the breeder came up with a cat which was called the “Cheetoh,”

If You Want a Bengal, Cat-Proof Your House

I watched a You-Tube video called “How to Bengal-Proof Your Home.”  I think you would enjoy it, so have included it here.

These cats, more than normal cats, love to climb as high as they can.  They will get into all of your cupboards.  They will open cabinet doors and drawers.  Drawers are a special favorite, and they will work at them until they open them.  They seem to be especially fond of such activity in the middle of the night.

To keep them out of cupboards and drawers, give them some boxes.  When they get tired of these, they may go back to the drawers, so if you don’t want them in there, you’d better put locks on them.

They love windows, so you might want to put a hanging bed close to a window where they can watch the outside activity.  Do not 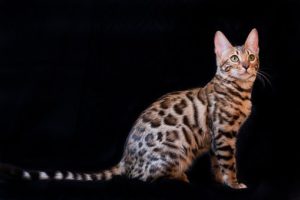 leave food or other objects on the counter.  Keep the counters clean.  Build a shelf system up the wall so they can climb up there and sit on it.  They would also enjoy a giant cat tree.  If you are handy, you can build this structure yourself.

They are good at knocking things over, so be sure to cat-proof all flat surfaces.  Make sure you don’t leave an open beverage where the cat can knock it over.

Hide small things because the cats will run off with them.  They might take your jewelry, or remove earplugs from your ears while you sleep.  They will pick up anything small enough to get in their mouth.

They like to close doors.  They may be on the wrong side of the door they just closed, and then they will yell until someone lets them in.

Since they are territorial, they do not like other cats near their house.  They can become quite aggressive.

These cats love to explore, run, and climb.  They are very active and quite smart.

If you have one of these cats or knows someone who does, I would like to hear your experiences with it.  You can respond in the “comment” section.

2 thoughts on “Have You Seen the Exotic Bengal Cats?”