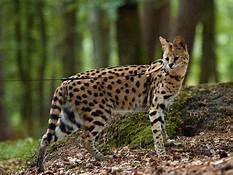 The Savannah is the largest domesticated cat. This cat originated from a cross between a domestic cat and a serval, a medium-sized, large-eared wild African cat. A male serval was crossbred with a Siamese to create the first member of this new breed.

This unusual cross is actually a relatively new cat on the breeder’s books. The cat became popular with breeders in the late 1990s and in 2001 TICA (The International Cat Association) accepted the savannah as a newly registered breed. Then in May 2012, TICA accepted it as a championship breed.

These cats are tall with a slim build. This gives them the appearance of greater size than their actual weight. Size is very dependent on generation and sex, with first and second generations being larger. This larger size is due to the stronger genetic influence of the African serval ancestor.

When a savannah is a first generation cat, it will possess most or all of the serval’s exotic looks. These traits often diminish in later generations. The males tend to be 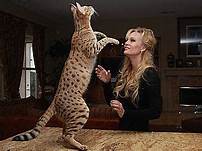 larger than the females. A savannah’s height can be from 14 inches to 17 inches.

Early generation savannahs can weigh from eight to 20 pounds. First and second generation males weigh the most due to their genetics.

The savannah cat should be spotted. This spotted pattern is the only one accepted by the TICA breed standards. The reason is because it is the only pattern found in the African serval cat. Other patterns and colors may be found which are due to the genetics of the domesticated cat involved in the breeding. 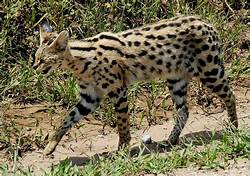 Because they copy many of the serval’s distinguishing characteristics, they have an exotic appearance. Here are some of the most prominent characteristics: Various color markings; tall, deeply cupped, wide, rounded erect ears; very long legs, fat, puffy noses and hooded eyes. Their bodies are long and leggy. When the savannah cat is standing up, his hind end is often higher than his shoulders, which are prominent. The small head is taller than wide. The cat has a long, slender neck.

What Are Ocelli Markings?

The backs of the ears have markings called “ocelli.” These markings feature a central light band bordered by black, dark grey, or grown. These markings give an eye-like effect to the markings.

These ocelli marks are used to scare off predators, by mimicking the eyes of predators’ enemies.

The short tail has black rings and a solid black tip. As an adult, the cat’s eye color can be green, brown, gold, or a blended shade. The eyes have a “boomerang” shape. The brow is hooded to protect them from harsh sunlight.

Ideally, there is a black or dark “tear streak” or “cheetah tear” marking that runs from the corner of the eye down the sides of the nose to the whiskers. These markings look much the ones on a cheetah.

This breed of cat is known for its loyalty. The cat will follow you around the house It can be trained to walk on a leash or to fetch.

A savannah needs some sociability training. If the animal is exposed to other people and pets at a young age, it can become very social and friendly.

Savannah cats can really jump. They are known to jump on top of doors, 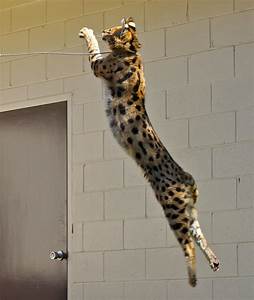 refrigerators, or high cabinets. Some of these cats can jump eight feet high from a standing position.

They have their full share of curiosity. These cats are very inquisitive. They are clever, and can often open doors and cabinets, so you’d better keep a close watch on them to keep them out of trouble.

Often, savannahs do not fear water, and will play in it or even immerse themselves in water. Some owners even shower with their savannah cats. If you give the cat a bowl of water, you may be in for a surprise, because they will promptly bat all the water out of the bowl with their paws until the bowl is empty.

Another of their quirks is to fluff out the base of their tail as a way of greeting you. This action is different from the fluffing out of fur along the back and down the full length of the tail, in fear or as aggressive action. Savannahs will often flick or wag their tails in excitement or pleasure.

They make varied sounds. They often chirp like their serval fathers or meow like their domestic mothers. They might vocalize both a chirp or a meow, or will sometimes produce sounds that are a mix of the two. The chirping sound is more common in earlier generations.

There are three basic factors that affect the character of the savannah cat’s behavior:

These three will follow the “nature and nurture argument.” Nature by breeding lines is combined with the generation, and nurture refers to the social upbringing. The most influential factor in savannah behavior is the early socialization of the cat. Kittens can be socialized with human contact from birth. Human interaction each day reinforces the kitten’s socialization.

When this early interaction occurs, the kitten’s socialization will last throughout its life. Kittens looking forward to human visitors and liking the interaction with visitors who are likely to play with them tend to grow into cats more welcoming to strangers and less frightened by a new environment.

Human-cat socialization should be a daily practice to give positive reinforcement. Then the kitten will grow into a well-rounded savannah cat.

This information came from an article on Wikipedia.org.

I researched another source that gave similar information, but with a slightly different emphasis. Therefore, will provide it here to give you the “full meal deal.”

The savannah cat was developed to give the impression of the grandeur and dignity of a wildcat with a cheetah type appearance. Those expressive eyes, highlight by the dark tear stains are memorable. The vibrant coat colors, solid contrasting black spots, huge sonar-like ears and long legs are distinctive characteristics. 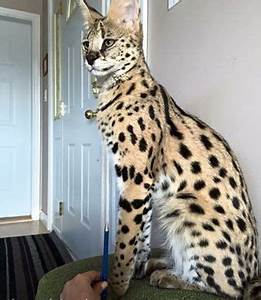 Since the year 2006 this cat has held the Guinness Book of World Records for the world’s tallest domestic cat. The goal of breeders was to develop a cat with a well-rounded temperament, yet wild-looking. They seem to have succeeded.

Here are some basic facts:

Hypoallergenic: No (allergies come from protein found in the cat’s saliva.)

When the savannah is a kitten, exercise plus socialization is an extremely important part of the training. It works best to expose the kitten to a friendly atmosphere and add positive reinforcement.

There are no specific issues to the breed at this time.

Reproduction is difficult and litters are small, usually from one to three kittens. Some of the offspring are infertile due to genetics. Fertile savannahs are notoriously selective, pairing only with those they have been raised with from kittenhood. The gestation period of the African serval is ten days longer than a domestic cat. Therefore, first and second generations are hard to provide.

At present, there is no specialized health care needed for this breed.

Being highly intelligent, this cat is very curious. Thus he often gets himself into trouble. He is best-suited to an active owner.

The temperament is outstanding when the cat has been properly socialized. The savannah is the feline version of a dog. It will actively seek social interaction, and, in fact, is given to pouting if it is left out. This feline will remain kitten-like throughout its life. Showing profound loyalty to immediate family members, it may question the presence of strangers.

If you have bonded with your savannah cat, you will have an excellent companion that is loyal, intelligent, and eager to be involved. The cat has the ability to learn simple to complex commands.

The cat’s nutritional needs are the same as the average domestic cat. However, please get good-quality food, not a cheap food loaded with fillers. These cats grow fast, and cheap foods have been linked to diarrhea, weight loss and even cancer. These cheap foods also lead to brittle bones that can break easily.

The Savannah cat’s ears are remarkably large and high on the head. They are also 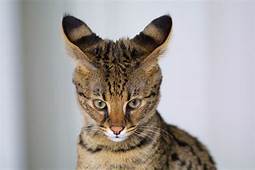 wide with a deep base. They are upright with rounded tips.

The head is broad; a modified wedge with rounded contours. It should be longer than it is wide. The anterior view of the face is triangular. Your cat will have a long nose and a small chin. It is preferred if the forehead is marked with an 11 instead of with an M.

The spots are solid black and can be rounded or oval. These flow across the body, but are not connected. The coat is dense with short hair, and can be either coarse or soft. There are a series of parallel stripes, from the back of the head to just over the shoulder blades, then fanned out slightly over the back.

It is possible to train this cat to a leash with practice and patience. They are very intelligent and need sufficient mental stimulation, so leash training can provide some of this.

The above information came from www.f1hybridssavannahcats.com/savannah-cats

If you liked this article, please leave a comment below.  If you have a savannah cat or have ever been around one, please let us know your experiences with the animal.  It’s always fun to hear from someone who can share what they know, especially about an unusual breed.