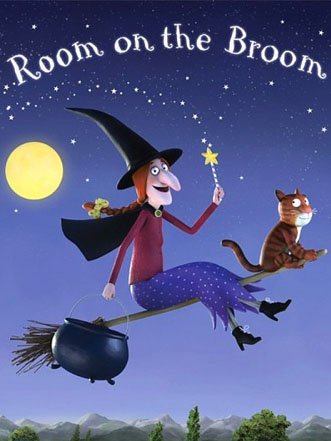 Greetings, readers!  Lucinda the literate cat here.  My CCL (Cantankerous Cat Lady) informed me that we should have done this particular review last week, since it is a Halloween story, and today is October 31.  It’s about witches and Halloween, so it definitely fits the day.

Well, as you two-leggeds say, “Better late than never.”  If you decided to order this book for your child, and the youngster likes it, you may end up reading it every day for a while.

A note of caution to all my black cat friends out there:  These two-leggeds get some strange ideas about this holiday, and they may decide that black cats, often associated with witches, may be evil.  It’s a lie — we are not evil — we can’t help the color of our coat.

Anyway, if you are a black cat, I urge you to stay safely indoors for the day and night of October 31.  Better safe than sorry.

Now, to the book — This is a story about a kind witch and her cat (who happens in this case to be a tiger-striped cat.)  Thank goodness for that, as it bothers me when such stories put the spotlight on black cats.

The witch decided to go for a ride on her trusty broom, and the cat accompanied her.  Now, how does a cat learn to ride a broom?  They must start lessons when they are young and foolhardy, and by the time they are grown, they are used to such a mode of transportation.

Unfortunately, the witch picked a windy day to take her ride.  First the witch’s hat goes flying, then her hair ribbon, and then her magic wand.

A spotted dog collects the witch’s hat and returns it to her.  Then he asks if he can ride, too.  The gracious witch invites him to come aboard.

Now, where did that dog learn to ride a broom?

No matter — it’s just a story, and the characters in a story often know how to do amazing things.

Now the trio meets a green parrot, who finds the witch’s lost hair ribbon and returns it.  Of course, the parrot wants to ride, too.  Fortunately for that parrot, it can fly if there is a broom crash.

The last creature they meet is a frog, who rescues the wand from the bottom of a pond.  Good thing the frog saw the wand, because at least he could go in the water to retrieve it.  I am not a good swimmer and have an admiration for such creatures who are at home in the water.

It gets a bit crowded on the broom, but as it turns out, it is good all the animals are on the broom with the witch.  As you will see, they save the day.

As they were flying, the frog jumped up and down for joy. Unfortunately, this was what you readers call the last straw, as the broomstick broke in half.  The animals all fell to the ground, though the witch still flew on, with only a half a broomstick.

The animals fell into a bog, sinking into the mud.  Then, as the witch flew through a cloud, she heard a terrible roar.  A fire-throwing dragon emerged from the fog, saying he would eat witch and chips for his tea.

Oh, my goodness!  These characters get in some bad situations.  I for one am really glad there are none of such monsters left in our world.  Perhaps they are all imagined.

Even so, they are still scary.  When I ran my paws under the words, and the picture of the dragon came into my mind, I couldn’t help it — I hissed and spat at that creature.  Then I realized it was just an image from the book.  How embarrassing!

Anyway, the witch tried to fly high, to get away from the dragon, but he was fast and rose high to overtake her.  So she flew to the ground, hoping to find a way to escape.

The witch looked for help, and the dragon drew nearer.  Just then, a horrible beast emerged from the bog.  It had feathers and fur and was covered with tarry mud.  It had four heads, and when it spoke, the noise was horrible.  Its voice was “a howl and a growl and a croak and a shriek.”

Making that scary noise, the strange creature approached the dragon, who started to shake.  The creature said, “That’s our witch.  Put her down.”  The dragon, badly frightened, did so, and then flew away.

Now the saviors separated into the four companions on the broom.  The  frightful creature was no more, and the witch thanked them all for saving her from the dragon.

She built a fire and put her cauldron over it, as she had hauled the big container along with her.  She told each creature to bring one item to put in the pot.

As it bubbled, she used her magic wand and muttered a spell.  Then, from the pot rose a streamlined broom, designed very well to carry creatures on it.  There was a big seat for the witch and smaller ones for her passengers.  They all had padded seats so they were quite comfortable.  They rode out of this story in ease and style.

Now, I might enjoy riding on such a broom.

I do love the imagination of these two-legged writers.  And, by the way, this whole story is written in verse, making it even more charming and amusing.  If you would like to read it yourself, I’ve asked the CCL to include a link to Amazon so you can purchase a copy.

The CCL says I must remind you that, if you purchase, she will receive a small commission.  So here’s the book:

Room on the Broom, written by Julia Donaldson

For your youngster’s pleasure, here is a sticker book for them to enjoy

Room on the Broom Sticker Book

Not eligible for Prime