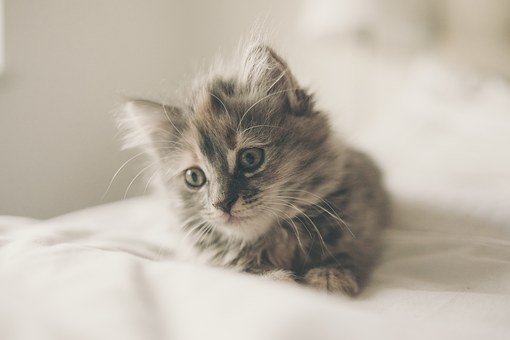 If you adopted a kitten that was just six weeks old, would you know how to take care of it? I was asked this question recently on Quora, and decided that our readers here on The Literate Cat might appreciate the information as well.

First of all, how do you choose a kitten? First, you have to decide where to get it. Do you know someone with a cat that just had kittens? Do you go to a shelter? Do you buy a cat from a breeder?

It is better to leave a kitten with its mother until it is eight to twelve weeks old. By then, it is completely weaned and has learned some important skills from its mother. Kittens can be taken from their mother as early as six weeks old, but the recommendation is to wait a bit longer. The cat who is weaned early may end up with poor learning skills. Also, it may show aggressive 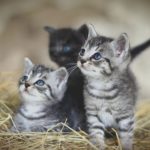 It is important that the kitten has learned to use a litter box before taking it from the mother. Also, when you are ready to move, make the process easier by taking something the kitten has slept on, so it will have a familiar smell in its new sleeping quarters.

WHICH KITTEN TO CHOOSE?

Once the kittens are used to you being there, they may come to investigate you. Observe which ones come to you. Perhaps the one most interested in who you are would be the best one to choose.

PREPARE YOUR HOUSE FOR THE NEW RESIDENT 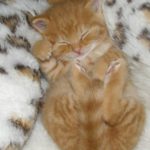 When you bring the kitten home, create a space that is its own. Set aside a small room or space in an out-of-the-way place that is quiet, and thus not stressful. Put the food dish, water, a comfy bed, and a litter box in the space. A scratching post and some toys are good additions. You might use a playpen for the kitten’s first territory. To give it a place to hide, put a cardboard box close by, with a kitten-sized entry way cut into it.

Do not put the litter box close to the bed. After all, would you like to sleep next to your toilet?

IMPORTANT RULES FOR HANDLING THE KITTEN

At first, don’t pick the kitten up and pat it continuously. Give the animal time to adjust to its new home. Its adjustment to people should be gradual. Let the kitten make the first move.

It is important that you teach your children how to handle the baby cat. Teach older children how to pick it up and handle it properly, but limit the amount of time they interact for the first few weeks. Give the kitten a chance to bond with its new family at its own speed. It is unsafe for the small baby cat to be handled by children under five, or by children who are too rough to interact with it gently and properly.

Regarding the litter box: Cats are fastidious, so keep that box clean. If you do not, your new resident may find some other, cleaner spot. If you keep the box clean, the kitten will be pleased and the box will not stink.

PROPER FEEDING OF A YOUNG KITTEN

Feeding a very young cat is important. You need a good-quality food that is made especially for kittens. Make sure it is nutrient complete.

There is such a thing as kitten formula. Often it contains goat’s milk, as well as other nutrients. Do not give your kitten straight cow’s milk, as it will cause diarrhea. You can buy a prepared kitten formula, or you can make your own. I found several recipes online.

You can usually switch to adult cat food when the kitten is about a year old. A visit to the vet of your choice would be a good idea early on after your kitten’s move to your house. One thing the vet can advise you on is how much and how often to feed. Then establish a feeding schedule so the kitten 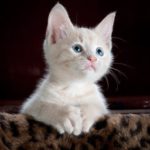 will know when to expect meals.

Always keep the water in the bowl fresh. They do like fresh water. My Spruce Island caretaker, Greg, decided once while I was gone to give the cats and the dog their water in one dish. He cut the bottom six inches off a five-gallon bucket and put it on the kitchen floor for the animals to share. My big Sam cat, when he wanted a drink, would sit in front of that water dish and skim off the surface several times with his paw. He wanted all the dog slobber out of the way. Once he had swished off the surface, he would drink.

WHAT ARE SIGNS OF ILLNESS?

From your vet, learn about what shots the cat will need, and at what age it should be neutered or spayed. Also, there are several signs to watch for that might indicate illness. Some signs of pet illness are: lack of appetite, not much weight gain, nasal discharge, vomiting, severely painful abdomen, having trouble passing urine, having diarrhea, difficulty breathing, wheezing or coughing, pale gums, swollen, red eyes, or excessive discharge.

ADJUSTING TO ANOTHER PET

After the kitten is settled well in its space, let it out to explore the rest of the house. If other animals are present, keep them away from the kitten for these first couple of explorations. Don’t give the kitten too many new stimuli at once. The little cat has a lot of adjusting to do.

For the first introduction, you might want to put the kitten in the carrier and have the two 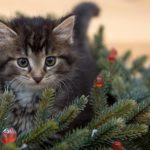 animals sniff each other while the kitten is safely locked in. If this first meeting goes okay, the next time you can open the room door and let them meet in the room with you close by to monitor. It may take a while, but give them time and give them both attention and affection. Most of the time an adjustment will take place.

Once the kitten is used to this new place and starts to bond with you, enjoy this little newcomer in your household. The laughter that comes from watching its antics is good for your health.

I used several internet references for the information in this post. The two main ones were Vetstreet.com and Wikihow.

4 thoughts on “What Is Necessary for Young Kitten Care?”