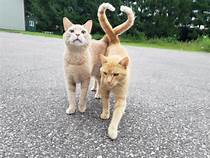 Though your cat can’t speak your language, he has many ways to communicate. He uses various parts of his body to send different messages. Learn to interpret these body movements and positions and you will be better able to communicate with your furry buddy. So, for starters, what does your cat’s tail say? 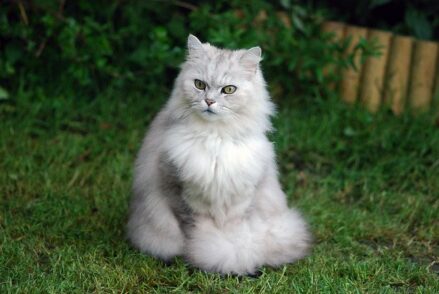 It is only to be expected that the tail is an important part of cat communication. The cat’s tail has as many as 28 bones. It makes up 1/3 of the cat’s spine. The clever tail design acts as a counterweight, helping with leaping, turning corners on the run, and balance.

Besides these important uses, the tail can also serve as a way to gauge kitty moods. Know the meaning of the various positions of the cat’s tail to understand this aspect of cat communication.

When confronted with a mean dog or a rival cat, the cat will often stand its ground by trying to scare off the threat. Adrenaline takes over, and the cat’s body and especially its tail fluffs out, in an 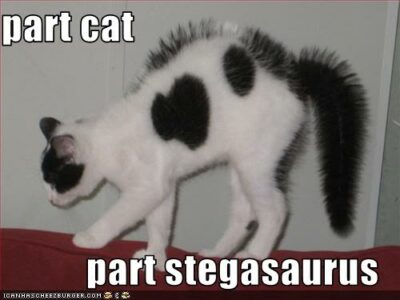 Though this fluffing of the fur doesn’t always help, sometimes it has the desired effect and the intruder departs.

Be careful to translate tail movements into cat and not into dog. For example, when a dog holds his tail straight up, he is alert, and possibly angry. When a cat holds the tail straight up, she’s feeling friendly.

While a dog will wag its tail when happy, a cat’s wagging tail could symbolize anger. No wonder cats and dogs have trouble understanding each other!

Interpreting a cat’s wagging tail can be difficult because different movements mean different things. Whipping the tail back and forth could indicate anger. Slow movement might mean the cat is focusing on a mouse, a toy, or perhaps another cat.

If something changes in the house, and the cat is trying to understand, he may move his tail back and forth slowly. I’ve watched my cat doing this when trying to work out a problem. I call it the “thinking tail.” 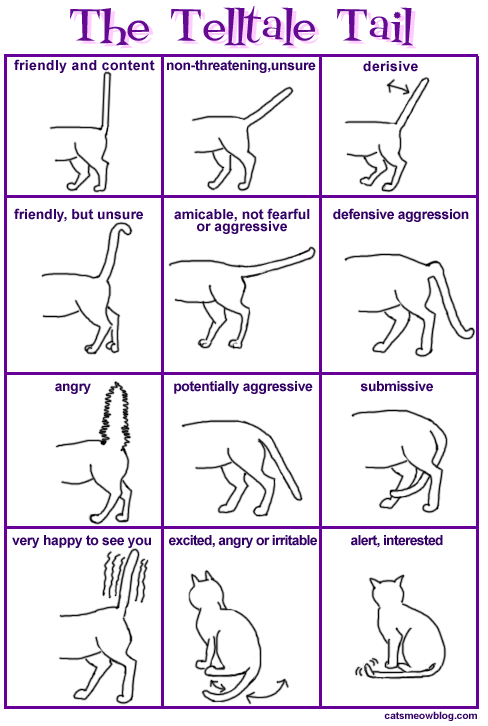 What about the cat who may be lying somewhere and looking comfortable, but the tip of her tail moves back and forth like a clock pendulum.

The cat feels uneasy about something. Perhaps she is frustrated, annoyed, or curious. Something is keeping her alert but she isn’t ready to get up and act on it.

However, if the whole tail is moving, check her face. If her ears are back, her body tense, and her eyes wide and staring, she may be getting ready to pounce.

Often when a cat is stalking, it will hold the tail low and stiff. Though they try to remain motionless, the tail can give them away by its twitch. This movement is called a “hunting twitch.”

The twitch comes from excitement, and lets the cat release energy built up by her trying to stay still.

A quivering tail is different. It doesn’t jerk; it vibrates. If a cat, male or female, backs up against something and lifts a quivering tail, it means the cat is about to release a spray of urine.

A tail-thumping cat is excited, but not in a good way, though such tail-movement from a dog could signify happiness. The cat’s excitement is from frustration or emotional upset. He may be watching birds through a window that he knows he can’t reach. Or perhaps he sees another cat outside. The faster that tail moves and the more forward he points his ears, the more upset he is.

Don’t pick him up when he’s in such a mood. He could turn his anger and frustration on you.

When your cat approaches you with her tail up, that means she is happy to see you. If the tip of the tail is bent and perhaps twitching, kitty is ready for some show of affection.

It is interesting that before cats moved in with us, adult cats did not greet people in this way. Only kittens did, when greeting their mothers.

Once cats began living around humans, they began adopting this habit. It was a way to show other cats living near them that they wanted to get along. Then the habit was also transferred to human friends.

It is interesting that we do not know if cats first came up with this signal to make peace with other cats, or if they began signaling us in this way first. In either case, we can interpret it as a sign of friendship.

Because the cat’s spine is loosely connected, her bones dislocate easily. For this reason, never pull a cat’s tail or pick it up by the tail. It could do real damage.

If kittens are play fighting, and one of them has had enough, he lets the other know by arching his back, curling his tail upward, and jumping straight up in the air.

Though this signal is only used by kittens, adult cats don’t need it, as they don’t usually play with other adult animals. When playing with a toy, they can be as rough as they want.

Cats identify family members by scent. Without this “family odor,” cats feel anxious and insecure. Therefore, they rub their scent glands on everything they can reach, as this spreading of their scent

to them signifies home.

When cats greet another family cat, or a good friend cat, the might hold their tails up and intertwine them. Then they might walk along “holding tails.” This apparently makes cats feel good and helps them bond more closely.

The next time you are trying to translate a cat conversation, be sure to look at the tail for clues.

This information was taken from a book from National Geographic titled “How To Speak Cat.” If you would like your own copy of this informational book, click the image or the blue-highlighted link below to be taken to Amazon, where you can purchase it. Please note that as an Amazon affiliate, I may receive a small commission.

How To Speak Cat: A Guide To Decoding Cat Language