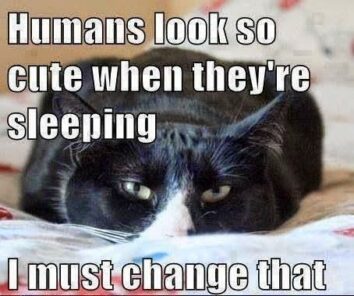 Greetings to you two-legged website visitors. Your literate cat, Lucinda, is here to review a story for you. It’s from the book, “The Personality of the Cat,” edited by Brandt Aymar.

It’s a story written by Murray Robinson called “Danger – Crazy Cats.” Mr. Robinson tells of several of his adventures with cats who have owned him.

He starts with a warning of the danger of offering sympathy to a little stray cat, and how a two-legged can end up hooked for life — all nine of the cat’s — into caring for and feeding this creature.

Then he tells the story of a skirmish he had with his family’s current cat, known as Willie. The cat feels that Murray should not be reading the newspaper in his august presence, so he jumps up and gets between the newspaper and Murray’s eyes.

If this technique does not stop Murray from reading, Willie also shreds a bit of the paper. Murray was a bit upset 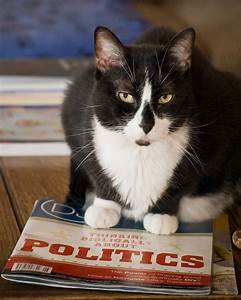 when he wrote this story, as Willie ripped up the racing page just when Murray saw a good bet.

Murray left the room in disgust after the incident, giving Willie possession of the easy chair, which is what he wanted all along.

In my opinion, this cat has just demonstrated a fine technique to use on two-leggeds so a cat can get what he wants.

Murray says that cats have discovered their household as a great place to begin the adoption proceedings — just move right in and the family will be suckered into keeping you as one of their full-time residents.

Murray says that Willie was taught his manners by another, older cat in the house known as Amber. They looked so much alike that some whispers went round that they were father and son.

Unfortunately, Willie lives under the illusion that he is a great fighter. Not so. When he prepares for an evening out, he first takes a few practice jabs at the beagle puppy, Kim. Then he sharpens his claws on a small rug near the door, left for just this purpose. Sharp talons are necessary for a fight. 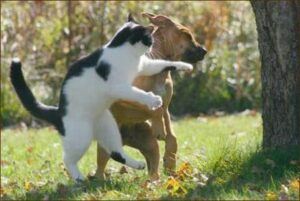 When Willie leaves the house, there is silence for a few minutes; then cat battle cries fill the air. Willie returns to the window-sill, demanding re-entry, all the while swearing under his breath. He may bear new battle scars.

Willie also feels he is a mighty hunter. One day he proudly brings home a very small field mouse, and demands praise for his prowess. Murray congratulates him, then gives the mouse a decent burial behind the back fence.

Next day, Willie comes in, bringing the same battered mouse. When he caught no new game, he dug up the old one and tried to pass it off as a new kill.

Then Willie brings home a dead blue jay. Neighbor children verify that the bird had been lying dead in the street, so Willie brought it home, claiming it as his prize.

Willie the optimist learns something the hard way. At my house, we get so much rain that it only takes us a couple of 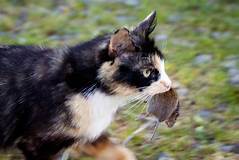 tries to realize the whole world is raining.

Willie, however, woke from a nap one day and wanted out. He asked politely at the front door. He put one paw outside and found it was raining so he pulled it back in.

Next he went to the back door, thinking that it must be sunny in the back yard. No, it’s raining there, too. He looks out the window, still thinking it couldn’t be raining everywhere, but it is raining there as well. Oh, well, time for a nap.

Another cat who lived at Murray’s, a grey one with white whiskers, came to the house one day and asked to be let in. Once he’d established residence, he was named Chauncey.

He had a terrible whooping cough, and when taken to the vet, his family learned he was allergic to cat fur. He couldn’t shed his coat, so he had to live with the problem.

How terrible! Now I can see some advantage to you two-leggeds’ strange custom of removing your skin covering every night and putting on a new one in the morning.

Chauncey also shared the home with a Scottie dog named Mac. The cat used the dog’s shaggy coat for a place to sharpen claws,and the dog never objected. When Murray took the dog for a walk, the cat went too.

At the end of the walk, the dog’s leash was removed so he could run up the long walk to the porch. Chauncey began racing him to the door, and could win every time.

Chauncey, getting bored by such easy victory, developed a handicap system. He’d give the dog a head start. The handicap was increased each day, until the dog just lost by inches. One day, Chauncey allowed the dog too great a handicap, and the Scottie won by a whisker.

This loss enraged Chauncey, and he cuffed the poor Scottie all over the porch. After that, he never again gave the dog such a good handicap so that he won.

One morning Chauncey awakened the household by plaintively wailing in the kitchen. Murray went downstairs and found the kitchen full of gas which was pouring from two open jets on the range. Murray turned the gas off.

He said to his wife that Chauncey was a hero. “If it hadn’t been for Chauncey, we might have all been asphyxiated.” His wife replied, “Some hero!” Who do you think turned on those gas jets but the damn cat.” She was right.

My goodness! The cats in this story get into so much trouble. Why, I would never pull such capers!

Once Amber, the cat who raised Willie, did something pretty amazing. He was about a year old when we looked out the back window and saw Amber lying in a corner of the yard around a faucet, with water dripping slowly on his head.

Around him sat a dozen older cars, studying Amber with scientific interest. When they were still there, hours later, his two-leggeds took Amber to the vet.

The vet said, “He has a fever, and he was just trying to cool his body under the faucet.” I call that creative thinking. Good for Amber!

Cats are willing to share with friends. CCL (Cantankerous Cat Lady) tells of her Carlos, whose best friend, Tiger, lived across the street. Tiger’s leg was injured by a dog, and he couldn’t hunt any more. He’d come to our house to laze around in the afternoon. Carlos started bringing him mice and voles, since Tiger couldn’t catch them himself.

It is a known fact among us cats that we know how to tell time. We know when it’s time for our meals. We know 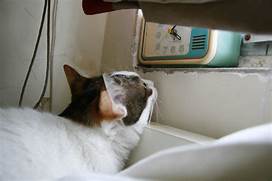 when our two-leggeds are coming home. In Murray’s story, he tells about a two-legged who has to get up at 8:00 a.m. every morning except Sunday.

One night when the power went off, his alarm didn’t go off, either. However, the cat knew it was time to get up, and got on the bed and slapped his two-legged on the face. After that, the two-legged experimented, and found that he didn’t have to use his alarm, because the cat would wake him at the proper time. That skill only became a problem on Sunday morning.

I do like this story, as it points out some of the ways in which we interact with our two-legged family, and some of the smart or silly things we do.

We cats, like you two-leggeds, each have our own personalities and find our own ways to relate to you two-leggeds and your life-style. Usually, if you give us a chance, we know how to fit in. We can make your life richer by being part of it.