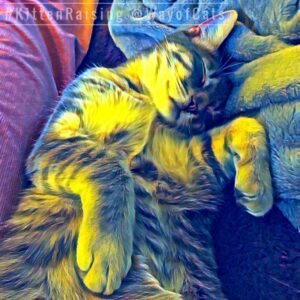 Felines, being such individuals, have accumulated a great deal of cat mythology and folklore from various parts of the world. These beliefs show a great deal of variety, which is not surprising, as cats have such distinct personalities and characteristics.

You have probably heard the myth that it is not wise to let a cat sleep in the same room as the baby, for fear it will smother the child or suck its breath.

This superstition goes back to an ancient Hebrew folktale. According to this myth, Adam had a wife before Eve. Her name was Lileth. She refused to submit to Adam’s wishes and was therefore banned 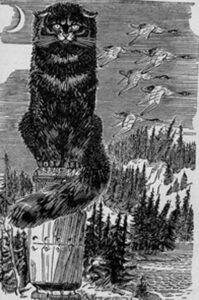 from the Garden of Eden. From then on, she haunted the earth as a demon.

According to Sephardic Jewish belief, Lileth took the form of a huge black cat. This cat’s name was El Boosha, and she sucked the blood of the newborn.

The Buddhist faith had a completely different view of the cat. In Southeast Asia, it was believed that when a person died who had reached the highest level of spirituality, his soul entered the body of a cat.

The soul remained there until the cat died, and then entered Paradise. This belief could explain why some of the statues of Buddha show a cat at his feet.

This benign view seems to have persisted until the 20th century. In 1925, when King Prajadhipok was crowned king of Siam (now Thailand), a cat played a part on the coronation procession, being the representative of the former king, Rama VI.

From the 17th to the 19th century, a whole collection of superstitions arose. One frequent custom in Britain was to wall up the body of a cat — usually dead, but, unfortunately, sometimes alive, in a newly-built house, or to place one under the front doorstep.

The purpose was to bring good luck, but, believe me, if I were to move into a new house and found that such a custom had been followed, I would move out again!

England’s country folklore had plenty of other cat’s tales. For example, if a cat was born in May, it would bring snakes into the house. That must have been the problem with a cat who shared my home years ago in Boulder, Colorado.

The cat was always bringing little snakes, alive, into the house to play with. When I’d try to get the cat to take the snake back outside, she’d run under the furniture with it. I usually had to trap that snake and remove it myself.

Another story from English folklore was that if you wanted a cat to be a good mouser, it had to have been received as a gift. If you bought a cat, it would never be a good mouser.

Also, it was said that a young woman who nursed a cat on her knee would never marry. By the same token, if a girl was fond of cats, she would die an old maid.

The largest number of cat superstitions in England could be attributed to the effect of cats on weather. These may be the result of ancient beliefs, as witches and their cats were supposed to bring about weather catastrophes.

Sometimes sayings could be contradictive, such as these two from two different areas of Britain. In one area, the weather lore says that when a cat washes its ears it is a sign of rain. However, in the north of England they say just the opposite.

Here is another example: In a poem written by Jonathan Swift, author of Gulliver’s Travels, he tells us from folklore that when rain is threatening, cats will stop playing and become still and thoughtful.

Perhaps Swift was making an observation that comes from Ireland, since he was born and lived there. In other parts of the British Isles comes the belief that when a cat gets excited and playful, rain will follow.

Though cats have long been associated with night, there are not many ghostly tales about them. In the mid-19th century, however, there is a story of a feline ghost who appeared near Chetwynd Hall in Shropshire, England. The owner was a Madam Pigott, who died in childbirth about 70 years earlier.

She had been seen in the park of the Hall on a moonlit night, sitting at the base of a tree and combing her baby’s hair. She was accompanied by a black cat. These ghosts were exorcised.

Another cat haunting story comes from Ropley in Hampshire, England. About a century ago, an old woman often met a cat on the stairs of her cottage. At times the cat would be found sitting by her fire; then it would walk across the room and disappear abruptly.

The woman told a local historian that she was not frightened. To the contrary, she believed the cat was the ghost of her mother. She said she recognized it because it had her mother’s way of walking.

Sometimes a live cat can take on the role of reincarnation. In an interview I did, I learned that an elderly lady believed her cat was the reincarnation of her husband, as the cat was born shortly after the husband died, and the cat shared her husband’s attitude about how she should behave.

The Japanese believe that cats are lucky. An example: The maneki-neko (beckoning cat) is believed by the Japanese to bring good fortune to the owner, usually in the form of cash.

According to one Japanese legend, a cat once beckoned a lord into the house by waving its paw, and the lord was saved from being struck by lightening a moment later. Therefore, the gesture is considered a lucky one to receive from a cat.

According to Buddhist belief, a cat with a dark coat signifies a promise of gold, and a light-colored cat brings silver.

In Russia, the Russian Blue cats are considered lucky. In many civilizations a cat with extra toes (polydactyl) is considered a good-luck charm. Many-toed cats are also supposed to ensure safe traveling.

In many cultures, cats are considered to be mystic creatures. It is said a cat’s eyes are windows to

the fairy world. If you peer through them, you can see visions of the world of magic that lies beyond.

It seems to me it could be difficult to get the cat to lend you his eyes, so I see no way in which you can prove or disprove this belief.

However, the cat does seem to be a magical creature in some ways, and it is easy to see why myths and folklore have grown up around the animal. Whether you believe these stories or not, if you have a cat, you will have the privilege of observing the magic in his life and that which he brings to yours.