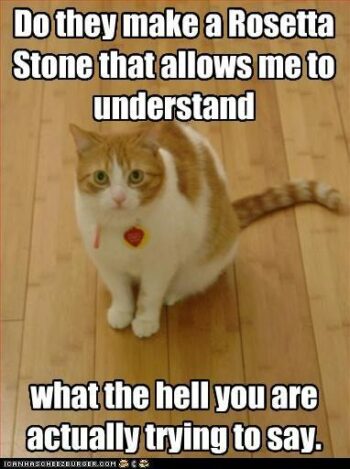 Does your cat seem to understand what you say to them, at least part of the time? It is my belief that if we spend quality time with our cat and talk to him a lot, he probably understands more than you know. Give us your opinion — Do cats understand human language?

For starters, have you had success in teaching your cat his name? Sometimes this process can take a while. Many of us have had the experience of calling our cat and receiving no response. Is this because the cat knows his name and chooses not to respond, or because he does not know that the name refers to him?

Does Your Cat Listen To Your Conversations?

So, does the cat listen to our conversations? As a matter of fact, they do. When I had a knee replacement, a group of ladies came by every afternoon for a while to make sure I did my exercises.

Often we’d sit around the kitchen table and talk. My cat, Carlos, always interested in the goings on in the house, would sit close by with his back to us and ears up and alert. Perhaps he found it easier to sort out the conversation when seated that way, because he remained very still and attentive the whole time we talked.

Carlos definitely knew his name. I let him go outside, but he knew that suppertime was at 4:00. I’d go outside and call when mealtime arrived, and he always came running.

If you wish to teach your cat to recognize his name, my research gives some pointers. Here’s one I didn’t know. When you first start out, try not to use your cat’s name too much, as he may just tune it out like background noise. At first, use his name just during training sessions.

Create a positive association with the name by pairing it with a tasty treat. Use something your cat really likes. This morning I used ten pieces of chicken, cut very small, to help with training my new cat with name recognition, and he thought the chicken an excellent idea.

Make sure the treats are tiny, so you can give several rewards during your session. Besides, you don’t want to spoil his appetite for dinner.

During the training session, say your cat’s name, then immediately give a treat. Say the name again and give a treat. Follow this process about 10 times during a few minutes.

As you move forward with the training, mix your cat’s name with other words, but reward with a treat whenever you say his name. By doing so, you will help the cat associate the treat with the name, rather than just the sound of your voice.

Practice this game every day, about three times a day, such as morning, noon, and night. Keep it up until you see evidence that the cat recognizes the name.

Will Kitty Come When You Have No Treat?

Once kitty has firmly lodged her name in her kitty mind, try calling her without holding a treat, and see if she responds. If she turns toward you, or better yet, comes running, you will know you have succeeded.

It’s interesting that when we talk to pets using a high-pitched voice, and since the cat’s hearing range has a wide scale and pitch, kitty may respond to our voices when they vary considerably from our normal speaking voice.

If possible, train your cat when she is still very young. A kitten can start the socialization process at 17 days old. Thus, during this time period, the kitten should receive handling and get used to the human voice and touch. In that way, you remove fear and the kitten will instead associate you with attention, food, and love.

The cat does not necessarily recognize that the word they respond to is their name. Instead, he recognizes that the sound usually means that something else will happen, such as receiving food and treats, or going on a trip.

A study done in Japan in April 2019, investigated 78 cats. The researchers wanted to find out if cats could distinguish their names from other random words spoken to them.

Most of the cats in the study lived with their families. They may have been the only cat or they might belong to a multi-cat home. A few lived in a cat cafe.

Researchers from the University of Tokyo, led by Atsuko Saito, tried four experiments. In the first, cats in single-cat families heard their owners say four different words with a similarity to the cat’s name. Then their own name followed.

In the second experiment, cats from multi-cat households or from a cat cafe would hear the names of the cats with whom they shared a home, followed by their actual names.

In experiment four, some of the cats from the first three experiments took part, but most of the rest were new, ranging from single- to multi-cat households, This time, a stranger said four words followed by the cat’s name.

Yes, the cats actually did respond to their own names.

Once these cats heard their names, they showed signs that they listened and seemed intrigued. The showed such actions as twitching their ears, moving their heads, meowing, and sometimes even getting up.

Saito conducted another study, and discovered that the cat does recognize the owner’s voice but usually chose to ignore it.

Though results of these studies gave more information, it is clear to researchers that new studies need to be done.

If you want to try this experiment for yourself, pick four different words with a similar length as the cat’s name. Say each word without any inflection or tone, and pause for about ten to fifteen seconds after saying each word. Then say your cat’s name using exactly the same tone.

What reaction did you notice from your cat?

Cats Recognize Names Of Other Cats He Knows

On a similar subject, here is an interesting bit of information. Scientists at Kyoto University in Japan did a study of 48 cats. They either lived in a household with at least three other cats, or came from a cat cafe, where they lived with many other felines.

Researchers showed each cat a computer monitor displaying a cat’s face familiar to them. With the picture was an audio recording of their owner, who either called the displayed cat’s real name, or a name that didn’t match the cat showing on the screen.

When the cats heard names that didn’t match the cat pictured, they spent more time staring at the screen, apparently puzzled. If the name matched the face, they stared less.

These cats anticipated a specific cat face when they heard the cat’s name, indicating that they could match the stimulus cat’s name and the specific individual.

Saho Tagaki, an animal science researcher, found these results “astonishing.” The experiment seemed to indicate that when cats seem to ignore you, they are probably being rude.

So, do we really know how much of our language cats understand? Perhaps the cats try to fool us into believing that they don’t understand us. Then they can use this knowledge of our conversations to manipulate us so we will give them what they want.