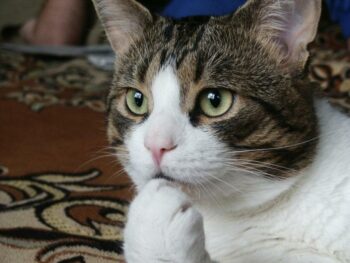 What defines the thinking cat? What do they think about? How do they interact with their humans? Though dogs have long had the reputation of being more loyal and loving, research now shows that cats can get just as bonded to humans as dogs do.

The majority of cats see their humans as a resource of security in the complex world we live in. Though it depends on the cat, they often establish a secure attachment with their human, and may often have a deep social bond with their person.

My cat, Pogo, demonstrates a good example of this behavior. I had known him for years, visiting his home at intervals. When I spent the night, he always slept with me. Over time, I taught him to crawl under the covers and sleep close to me.

Then one day I came to visit and was told he’d been taken to the Animal Shelter. By the time I found out, he’d been in there over seven months. As soon as I could, I went to the shelter and discovered he was still there. He went home with me the next day.

The first reaction he had could be called gratitude. When I got him home, he followed me around all day. Whenever I’d stop moving or sit down, he’d be sitting at my side, purring loudly.

For the next couple of months, at night he had to be touching me. He tried to become a fur scarf or a pajama warmer. Perhaps he felt I’d disappear if he didn’t stay close to me. Gradually, he became more secure, and gave me a bit more sleeping space.

Now, he sleeps with me every night, but on his own blanket next to me. He feels more secure and does not fear I will abandon him, but he makes it known that I am very special to him.

How Good Is Your Cat At Reading Your Cues?

Many of us talk to our cats — I know I do. Have you ever tried to get him to investigate something when you point to it?

I’ve tried it with Pogo. At times, he doesn’t seem to understand what I want, but often he will respond. For example, if I point to a piece of food on the floor, he will usually investigate and gobble up the morsel.

What about scary things? Or things that make lots of noise? With Pogo, these things are not something he likes. If it is noisy or moves in an unusual way, he doesn’t care that I say it’s okay and won’t hurt him…he is under the bed. I have to move his cat box out of the bathroom when I do laundry, because he won’t venture in there while the machine is on.

Now, with my last cat, Carlos, he could be persuaded that something new and noisy would not hurt him a bit. He feared nothing. Something new would be more apt to arouse his curiosity. Often he would not wait for me to reassure him that all was well. He had to investigate. He showed no fear because he was a bold, brave cat.

How sensitive is your cat to your moods and feelings?

Cats can be sensitive to your moods. If you’ve had a really bad day or perhaps heard some news that made you sad, he may feel you need to be alone. If you are angry at something, stomping around the house and muttering to yourself, the cat might hide under the bed until all is calm again.

However, if you are in pain, the cat will often respond in a manner that shows his concern. When I had knee surgery, Carlos knew something was not right.

I stayed in bed, mostly, the first few days, attached to an ice machine that circulated cold water over the knee area. Carlos stayed in bed with me, under the covers and cuddled by my side close to that knee, for the first three days. He’d get up when I got up, but mostly he just stayed there next to me, sleeping or purring.

Studies show that the cat’s purr can help bones heal. Perhaps he knew he could help me by staying close to the injury and purring.

A cat can certainly recognize his human’s voice. That makes sense — after all, if we are the one who feeds them and cares for them, our voice identifies us to them and they will respond.

Does A Cat Feel Separation Anxiety?

Cats can feel separation anxiety. It’s hard for me to imagine what Pogo must have felt, when he was left in this strange place with strange cats and all those dogs who barked continually. He’s a timid cat to begin with, so he was not just anxious, but very stressed.

He pulled out all his stomach fur as well as in tracks down his legs. For the first few months after he came home with me, he may have been dreaming he was back in that place, and, half-asleep, or maybe dreaming, he’d start over-grooming.

When he displayed this behavior, I would talk to him softly and pet him, and gradually he’d relax and stop his compulsive fur-pulling. Finally, all his fur has grown back and he no longer over-grooms.

Cats can also let you know their feelings about something, and leave no question as to how they feel. One time, I went to the city for an overnight and asked a neighbor to come feed Carlos.

She forgot. Carlos got no supper or breakfast. He got on the kitchen counter and tore a hole in a bag of cereal and ate some of that. He knocked my butter dish on the floor and helped himself to a little of it.

But, somehow, it just wasn’t the same as his regular meal. When I came home late the next morning, Carlos met me at the door. He yelled at me, nonstop. We went inside and he made it very clear that he wanted to have something to eat — NOW!

Maybe he couldn’t speak English, but when it became necessary, he could make his wishes known.

Pay Attention To Your Cat’s Messages

I’ve found that the more time we spend with our cats, the more we learn about how they communicate, and what they are trying to tell us. I think it’s important to be open and attentive if you and the cat are having a problem, and often you can find out what the furry one is trying to tell you.

Some messages are quite clear. An example: Pogo and I have a practice I call “Cuddly Cat.” After lunch, I will throw a blanket on the bed, call “cuddly cat,” and get under the blanket.

Pogo will come and crawl under the blanket with me, curl up and prepare to nap. I stay with him about 45 minutes, then get up, and he will sleep for a few hours.

If I don’t prepare for Cuddly Cat, or if I am late in getting ready, the cat will start to meow at me. If he can, he’ll lead me to the bedroom, get on the chair next to the bed, and wait for me to get under the covers. Then he will join me.

So sweet! When we decipher the conversation, it can be very satisfying for both us and the cat.

Have you noticed that cats seem to be good at assessing people? Does your cat seem to know instinctively whether people like them or not? It seems a cat will often go out of its way to pay

For a time in Colorado, my husband’s younger sister lived with us. Once she started dating a guy we didn’t think was worthy of her, but of course we couldn’t tell her that. Perhaps it was just our perception, after all.

Then one evening she invited him to visit. We lived upstairs, and when her friend reached the top of the stairs, two black cats blocked his path…not something they normally did with visitors. Uptight Cat and Loose Cat were both on duty that night.

The fellow said, “I’m not coming in there. I’m not walking past those cats. Those are devil cats,” and he left. He never came back. The cats knew. My husband and I were secretly pleased.

Take up the challenge — Study your cat. Then try to determine what he wants to tell you. When you figure it out, both you and the cat will be pleased.

4 thoughts on “Thinking About The Thinking Cat”