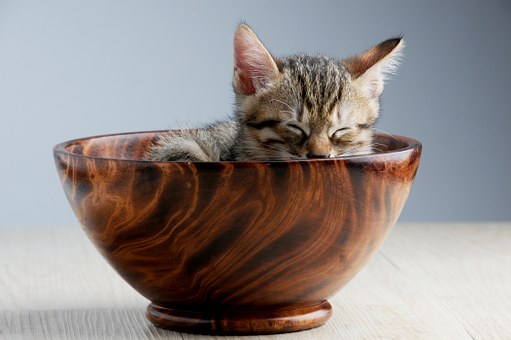 How does your cat think? Does he rely solely on instinct, or are there other factors piloting the kitty brain?

Well, according to psychologist Hank Davis, non-humans are a lot smarter and less “instinct-based” than most of us think. He surmises that perhaps we are not quite as clever as we think we are and cats are smarter than we believed.

If cats think, can they use deductive reasoning? As a matter of fact, they can.

Perhaps it would be good to start with some definitions. Inductive reasoning starts with a conclusion, then moves from specific instances to a generalized conclusion.

On the other hand, deductive reasoning moves from generalized ideas known to be true to a specific conclusion. For an example, here is a very famous illustration of this concept from Aristotle. He said, “All men are mortal. Socrates is a man. Therefore, Socrates is mortal.” 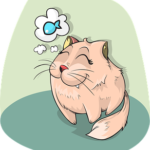 happenings in his world and came to a specific conclusion about these events?

In the Journal of Animal Cognition, Katherine Ellen Foley authored a paper with a heading I love, so have to quote it for you: “Cats use physics to get what they want, scientists have found.”

In this intriguing article, the author reports that scientists from Kyoto University in Japan have been researching cat behavior. They have found that cats can grasp the concept of gravity and cause and effect.

Sounds are of great value to the cat, and is useful for him. From sounds he hears, the cat can make his own predictions as to what he will see next. The sound he hears alerts him to the location of his prey.

An experiment was done by Saho Takagi and her colleagues. They collected 30 domestic cats for this experiment. Each cat was subjected to the test. For the experiment, a box was shaken. Sometimes the box made a rattling sound and sometimes no sound.

When the view of the inside of the box did not meet the cat’s expectations, the animal became confused. Why did something fall out of that silent box? Why did the other box rattle and nothing fell to the ground? The cats stared for long periods of time at the box that made a sound but there was no object inside.

The researchers concluded that the cat believed that, if the box rattled, when it was turned over, the object inside would fall out. Therefore, the cats were applying rules of physics — unattached objects in a box should fall to the ground because of gravity. 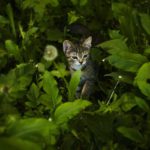 The cat has a basic understanding of the connection between sound and gravity. This understanding can improve his hunting skills, because often when they hunt they are in places with little light. They have to infer the location and the distance away of their prey from sounds alone.

I watched four videos of different cats climbing into a small, round fishbowl. You would think that none of them would fit in that fishbowl. The cat checked the bowl carefully. He might walk around it, or tip it on its side. In all four videos, the cat went in headfirst. If he could get a third foot into the bowl, he would go the whole distance .

All four of those cats got into the fishbowls. It was funny to watch them. It made me wonder what the fascination is with getting into small bowls, baskets, or boxes. My cats all did that. Somehow, they seemed to know if they would fit.

I can think of several instances in the actions of my own cats that seemed to show deductive reasoning. Have your cats ever tried to turn the door handle? We lived in a 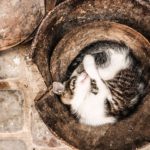 third-floor apartment for a while and I didn’t want to let the cats out.

My one cat really, really wanted to escape. He saw us turn the door handle and open the door. He got on a chair and tried to copy our behavior, but his paws just couldn’t grip that handle the right way to get it open…fortunately for us.

I think I wrote about my Carlos and the gate-jumping incident. When I moved to my Gustavus house, I had a six-foot-high fence built around my yard, and installed four gates, one on each side.

When the fence was done, we put in temporary plywood gates until I could get real ones built. Three of these were about as tall as the fence. The fourth, a double gate in front, contained gate pieces that were only about five feet high.

Before I had a cat door put in the fence, I watched Carlos one day, as he cruised the entire yard. He walked past all the gates, looking up at the top. He concluded that the front gate was lower than the other three, so he returned to it, got as far back from that gate as he could, and made a run for it. He got most of the way up, clawed his way to the top, tipped forward, and jumped out.

He might have thought, “There are four gates. One gate is shorter than the other three. Therefore, I will jump that one.”

Have you ever seen a cat jump across a wide space? How does he know he can do that? Somehow he can assess the distance and deduce that he can make it across.

Perhaps a simple example occurs at suppertime. The cat’s inner clock lets him know when it is time to eat. He knows he gets his food from me. Therefore, he must alert me that it is time to feed him. At night this process is simple. He simply meows and generally makes a nuisance of himself until he is fed.

In the morning, he has to get me up if he wants to eat. Cats can be extremely creative in 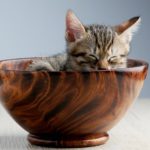 getting you out of bed, whether you want to get up or not.

Readers, pause and think of ways your own cat displays deductive reasoning. Please send me a comment. Certainly, those of you who are owned by a cat or two can probably come up with several examples.

That phrase, “owned by a cat,” reminds me of something else I read online. The article stated that research shows that dogs and cats see humans differently. Dogs see people as being different from them. (Someone said that dogs see us as gods.)

Cats, on the other hand, recognize that we are bigger than they, but they do not show by their behavior that they see us as different. Personally, I believe that is because cats view humans as their equals. It fits, doesn’t it? I do love my kitties!

2 thoughts on “How Does Your Cat Think?”