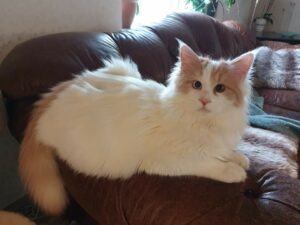 Van is a large lake, 80 miles long by 40 miles wide. It is located in the mountains of Southeast Turkey, close to the Iranian border.

It’s over 5,260 feet above sea level. In winter, it is the recipient of frequent icy storms. In 1955, visiting a village at the shore of the lake, an English traveler, Laura Lushington, came upon an unusual white breed of cat that was unfamiliar to her. The white cat had distinctive coloring on the 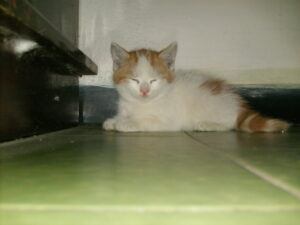 She was presented with a pair of kittens, and took them back to England. Four years later, she returned for more. She had introduced the Turkish Van to the cat fancy.

Originally known in Britain as the Turkish Cat, it was classified as a semi-longhair, and in North America as a longhair.

Though Similar Origins, the Van is Not Related to the Angora

Though these cats share Turkish origins with the Angora, the breeds are quite distinct. Because of geographical isolation, the Van evolved a bit differently. The Van is more solid, a heavy-boned animal. Its markings give it additional grace.

It was simply chance that caused Laura Lushington to find her kittens near Lake Van, thus giving 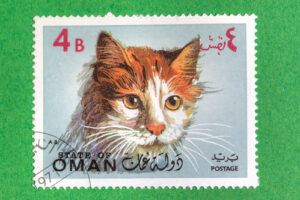 them a name. However, they are also found quite widely in other areas of Turkey.

In 1969, the Turkish Van was recognized by the UK’s Governing Council of the Cat Fancy. In 1970, the first Turkish Vans were imported to the United States, coming from British stock. Then, in 1970 and 1985 the breed first received recognition by a North American organization, the International Cat Association.

Distinctive Features of the Van

The distinctive color feature of this cat is the all-white coat, with only patches of color on its head and on and below the ears. This color patch is separated by a white blaze down the forehead. 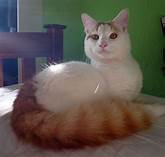 The full-brushed tail is colored, and often has rings of darker red. The cat has no woolly undercoat, which makes it easier than Persians to groom.

This color pattern is caused by the white spotting gene, which is dominant. Thus, if either parent has this gene, it will be passed on.

This cat is medium-sized and sturdily built out. The male in particular has a muscular head and shoulders. Legs are medium length, with small, round feet with good tufts. The coat, long and silky and with no dense undercoat, will moult a great deal in summer. In winter this cat looks its best.

Show Standards For This Cat

Show standard requirements include a short, wedge-shaped head, a long nose, and large, upright ears. These are close together and well-tufted. Eyes should be large and oval-shaped. The nose leather and paw pads are pink.

The cat is described as being loving and intelligent. It tends to identify most closely with one person. Considering its size, its appetite is large. The cat needs combing two or three times a week, with slightly more attention during moulting season.

This hardy cat enjoys being outdoors, so access to an enclosed patio, terrace, or garden is ideal.

The original Van color is a white with red, which is called auburn. Markings must match in the head and tail. In Britain, only the amber-eyed auburn is fully recognized. White with creme markings is in 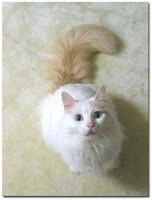 a preliminary stage of recognition.

Either color may show tabby markings. The eye color can be blue, amber, or odd-eyed blue and amber. In the United States, color of coat accents accepted includes black, blue, tortie, or torbie.

Color markings are present in kittens from birth, but as with the Angora, it normally takes several years for the coat to reach its most luxurious quality.

Here’s A Unique Habit of the Van

An unusual feature of this cat is its liking for water. If a lake or shallow river is available in its natural habitat, the cat might enjoy a daily swim. This cat has no need of swimming lessons. It is less reluctant to being given a bath than some other cats.

Other sources give additional information about these cats. First, the average weight: For a male, it is 10 to 12 pounds. For a female, 7 to 10 pounds. The cat will live from 13 to 17 years. It likes lots of socializing.

The Turkish Van coat is semi-long, and though it moults in summer, it has a low tendency to shed. Thus, the cat is less allergenic than other breeds. The coat is very soft and cashmere-like.

This animal is highly energetic, and has no predisposition toward medical issues. Though most cats might run at the sight of water, not the Turkish Van. This cat is a strong and capable swimmer, earning the breed the nickname of “the swimming cat.”

That soft coat is one reason why this cat can enjoy the water so much. The coat is naturally water-resistant because of its silky texture. The cat loves water, and can swim happily for long periods of time.

What Causes This Color Pattern? 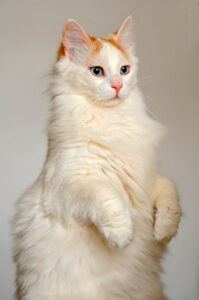 The unique color pattern occurs because of the presence of what’s called the “piebald” gene, a trait that appears in animals and humans. It results in large unpigmented areas of the body, so the cat is mostly white. The bushy, squirrel-like tail make the Van’s appearance more distinct.

This cat is energetic, playful, and fun-loving. It wants lots of attention from its people, so is good for those who have a lot of time to share. The cat is also a jumper, because of those powerful hind legs. Expect to find the cat in some high place where it can observe what is going on in the world.

You can also teach this cat to fetch. This acrobat-cat may even catch things in mid-flight or turn somersaults as they race around the house. Do know that the cat is better with dogs than with young children, so be sure to supervise.

Since it likes to climb, you may find that it will get into mischief, such as knocking things off shelves. Make sure this cat has plenty of toys to keep it amused.

This breed is rare, and dates back to ancient times. Records show it has been around for nearly 5,000 years. Its isolation has helped strengthen the breed.

If you wish such a cat, you may have difficulty in finding one. Perhaps it’s a good excuse for a trip to Turkey. If you do find a Turkish Van, you will have a cat that will make a wonderful addition to your family.

6 thoughts on “The Turkish Van: A Unique Cat Breed”