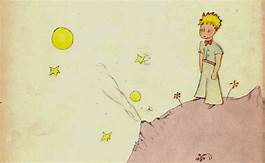 Greetings from Lucinda the literate cat. I am going to bring you The Little Prince book review. This is a very strange book. This unusual book was written by Antoine de Saint Exupery.

In the story, a pilot has landed in the Sahara Desert, as he was having engine troubles with his plane. Though I know nothing about engines, I have learned that things that make non-moving items move as if they were alive are called engines. Though we cats have no use for such things, I have noticed that the two-leggeds appear to be dependent on them. They want their machines to take them farther, faster, so they figure out ways to accomplish this amazing feat. We cats prefer the quiet life without a lot of changes. I wonder why the two-leggeds can’t live the same way.

Before I go any further, I have to tell you that I had to look up “Sahara Desert,” and was amazed at what I found. The desert is made up of hills and valleys of sand. 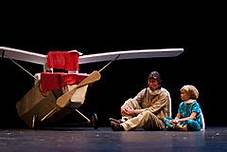 The whole place looks to me like a giant cat box. It would be convenient, too, if you wanted to go on a hunt, because you would have no problem finding sand to roll in to cover your scent.

Other than those two uses, I can think of no more. It is hot and dry. When small ponds appear in the desert, the surrounding area is called an oasis, and all the creatures gather there to drink. That would seem to be the best place to hunt, though a small cat could become lunch to larger visitors if she wasn’t very careful.

However, the pilot was not at an oasis, and he didn’t have a lot of food or water. He is surprised to see a small, golden-haired 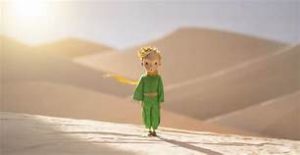 boy who appears unexpectedly out of nowhere.

The boy says he is from an asteroid, which is basically a large rock floating in the air far above us. He tells the pilot that, on his asteroid there is one rose, one baobab tree, and three volcanoes. The boy says he is a prince.

He is visiting larger places to learn about them. He does not say how he got to Earth, but tells about other tiny asteroids he has visited. He meets many strange characters.

On one asteroid lives a man who claims he rules the universe, even though he has no subjects. On another asteroid, he meets a conceited man who thinks that everyone admires him. On a third, he meets a drunkard who drinks to hide his shame from himself that he is an alcoholic.

On one tiny planet, the only resident spends his life turning on and putting out the only lamp. As the planet turns very rapidly, with 1440 sunsets per day, he is very busy. 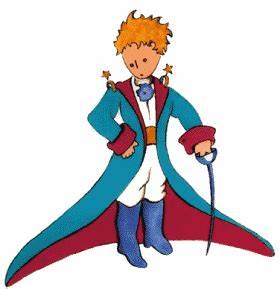 The little prince sees all these people as odd, but he respects the lamplighter because he is dedicated to his task. I can understand why he admires this man — he has a routine and he sticks with it. We cats tend to be the same way. We establish a routine and then expect our days to follow this pattern, every day. We often get upset by change. We want it all to stay the same.

Meeting With A Fox

In the desert, the little prince meets a fox. The fox explains to the little prince that if they are to be friends, he has to “tame” the fox. Once he is tamed, they will have established ties that bind them. Then they will be unique, as a source of joy to each other.

Isn’t this taming what you two-leggeds do with your four-legged friends? You feed us; comfort us; play with us; willingly establish a bond with us and then we become part of your family of friends. “Taming” is a good thing, so long as the bond created is one of love.

The little prince meets a snake, who tells him that one snake-bite can send him back to his asteroid. As he is very worried about his 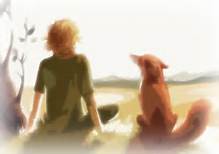 rose, he decides going home is a good idea. Meanwhile, the pilot gets his plane fixed.

Then the snake bites the little prince, and he falls to the ground. The next day, when the pilot is ready to leave, he looks and cannot find the boy’s body. He is comforted by this, thinking the boy must have made it home. Now he hears the tinkle of his friend’s laughter in the stars.

The fox’s sentiment suits the book well. He believes that it is only with the heart that one can see rightly. What is essential is invisible to the eye.

Though I thought that this was a sweet story, I also realized that it is just that: A story. Is the little prince out there on his asteroid? No, he is a product of the author’s imagination.

In this post I’ve offered a brief summary of this book, but there are more details that you can read if you get a copy. Here is a source online where you can purchase one.

This is a paperback copy of the book, The Little Prince

Available from Amazon.  Just click on the picture or on the blue highlighted book title, The Little Prince.

Read this book aloud to your children and you can both enjoy the story.  Some stories are timeless, and I believe this is one of them. CCL (Cantankerous Cat Lady) says, ” I did not read this book until I was an adult, and I really liked it, so it must be good for all ages.”

8 thoughts on “The Little Prince Book Review, By Lucinda”