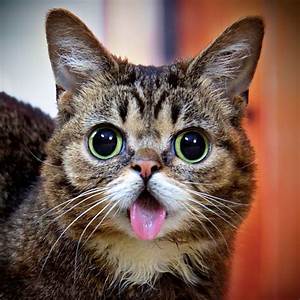 You may have asked, “Why do cats stick out their tongues?” You must have noticed that sometimes your cat seems to be staring into space with his tongue hanging out. Very often it can be a cause for laughter, as it looks quite amusing. However, at times it is the sign of a serious problem.

Some internet writers have named this tongue-out behavior the “blep.” So, what are the reasons for this blep?

As you may be aware, cats spend more than one-fourth of their waking life grooming their fur coat. Sometimes when they stop, they just forget to pull their tongue back in. The cat is so busy listening to the suspicious sounds you may have made, and just forgets that the tongue is still out.

Sometimes when your cat is sleeping, she will be so relaxed that even the jaw 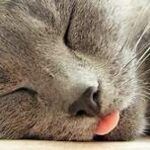 muscles are loose. Then the mouth may fall open and the tongue hangs out a small bit.

If it is very hot, cats will pant, just like a dog. Then the tongue hangs out somewhat. Though cats sweat through their paws and regulate their body temperature through grooming, if these methods don’t work, panting might be a help.

Do be aware that your cat is small and doesn’t have a large surface that will release heat. Therefore, the cat can get heat stroke rather easily. Make sure they have fresh water at all times, and move them into the shade if they are lying in a place that is in direct sun.

Signs of heat stroke are drooling, panting, lack of balance, and a very red tongue. The cat might shed excessively. If your kitty reaches a stage where it is lethargic, vomiting, and stumbling, you need to act quickly. Though she might not like it, put her in a cool basin of water, then take her inside.

When you bathe her, don’t change the temperature too rapidly. Doing so could cause a heart attack or aneurysms. If you have an older cat, especially one with long hair, she will be very susceptible to overheating, so make sure the cat does not get too hot. 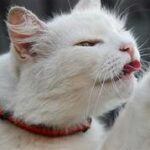 Sometimes the animal has an underbite. If, for any reason, the jaw does not close properly, the cat’s tongue may stick out. Don’t stress — you can’t do anything about an anatomical issue.

Also, if the older cat has lost some of her teeth, the tongue may stick out because the teeth are not there to hold it in place.

Sometimes the blep is caused by an overdose of catnip. Your kitty might go into a CATatonic state, with her tongue hanging out. Don’t worry — she will recover, when her “high” wears off.

She might not like the new food you gave her, and is trying to get the taste out of her mouth. She could also have something stuck in her teeth, so check, gently.

Have you noticed your cat opening her mouth after smelling something unusual? Then the cat might stand very still for a couple of seconds, with a silly expression 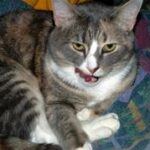 and protruding tongue. Why? Your cat has a unique organ on the roof of its mouth, called the vomeronasal or Jacobson’s organ.

The purpose of this organ is as an auxiliary sense of smell, and is primarily used for analyzing pheromones. The cat uses the tongue to direct the smell toward the Jacobson’s organ, so he can get a better chance to inspect it more carefully.

Then there are some bleps that are not harmless, and can be the sign of a serious health condition. Keep an eye on the cat. If she bleps frequently, and make a note of when she does it. If it is just caused by a hot day, all is well, but it could be caused by something more serious.

For example, if your cat is having problems with the respiratory system, he might stick his tongue out to ease breathing. Respiratory system complications can include infections of the throat or sinuses. 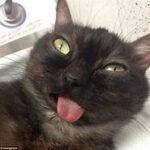 It is possible that your cat might have injured her head or jaw. Check her head and neck. You can do so by petting her and feeling her lower jaw. If she shows signs of discomfort when you handle her, she might have a broken jaw.

Such an injury is not always easy to spot, but could be the cause for a blep. The open mouth helps relieve pain. Such conditions can cause mouth cave inflammation, swelling, or even oral tumors.

You can check for such conditions by smelling your cat’s breath. Also check the gums. If the breath smells or gums look red and swollen, and the cat is drooling, you could have a problem.

A side effect of kidney failure that can be noticed fairly quickly is the formation of ulcers on the gums. Check those gums, and if you see anything unusual on the gum tissue, take your cat to the vet immediately.

A chipped tooth might be causing pain, so the cat sticks out her tongue to relieve some of it. Or, if you have a senior cat, and teeth have fallen out as a result of old 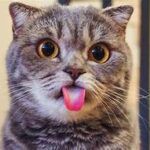 age or poor dental hygiene, the tongue may fall out because the teeth are no longer there to hold it in.

Could your cat be poisoned? If the animal is drooling, panting excessively, vomiting, showing signs of dizziness and breathing heavily, these symptoms could be signs of poisoning.

If you let your cat outdoors, be especially mindful that the cat does not eat a rodent who has ingested poison. Then your cat might get poisoned as well.

Do you take your cat on frequent car rides? Some cats find these rides very unpleasant because they get motion sickness. I can sympathize, as I sometimes have this problem.

There are remedies you can get for these conditions. However, do not give your cat human medicine. It is best to call your vet to find a remedy that will not cause more harm to your pet.

If your senior cat repeatedly darts his tongue in and out in a snake-like manner, it could be a sign of dementia. There’s not much you can do in this case, except for keeping the cat in a safe and well-known environment.

Information for this article came from an article by Jeremy Vaughn. If you would like to see the original, go to https://catspro.com/why-do-cats-stick-their-tongues-out.html. 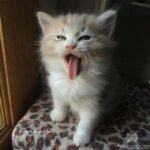 Hopefully when your cat displays a blep, it is for a simple reason and not one that means the cat has a health problem. It is much pleasanter to be able to laugh at this strange behavior than to be concerned about it.

If you have experienced some unusual bleps from your cat, please tell us your story in the comments below this post. Then we will all have a chance to learn from your experience.

2 thoughts on “The “Blep” Investigated: Why Do Cats Stick Out Their Tongues?”