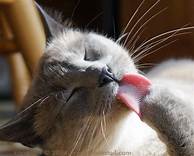 When did you first get licked by your cat? Do you remember how it felt? It probably reminded you of sandpaper. Here you can read some cat tongue facts that you might not have known.

What causes that sandpaper-like feeling? Why is your cat’s tongue so rough? Well, that feeling is caused by something called “papillae.” These are little spines that look like tiny hooks. The papillae cover the cat’s tongue.

These little barbs, or papillae face backward on the tongue. They are what creates that rough sensation you get when the cat licks you. Be glad you don’t have a pet lion that likes to lick you.  If the lion licked the back of your hand a few times, you would be left without any skin on that hand.

The barbs serve several important functions. They make it easier for the cat to remove meat from the bones of prey. They aid in grooming, as they will collect dirt, debris, and loose hair from your kitty’s coat. Another reason cats groom, besides untangling fur, is because the grooming can remove parasites and their eggs.

If your cat lives with a friend cat, often they will groom each other, as a show of trust between them. If your cat trusts you, he may also groom you.

In Kodiak, a friend lived with us for a time. He had a curly, bushy beard. Often Uptight Cat would get on top of our small refrigerator when our friend stood next to it. The cat would groom that beard as long as our friend would stand there. He seemed to be trying to straighten out that curly beard.

There can be a downside to this efficient grooming. All that debris and loose fur that the cat collects on her tongue will get swallowed. Thus your cat may end up with lots of hairballs. The tongue barbs can be dangerous if the cat gets yarn or other materials such as string or long fibers, because he won’t be able to spit them out.

The article I am referencing also mentioned tinsel as something the cat might try to eat and then will not be able to get out of his mouth. I had a fun experience with one of my cats and tinsel.

Uptight Cat loved tinsel, and I had to chase him away from the Christmas tree regularly. In fact, I kept the vacuum cleaner under the tree. When the cats got too close, I’d just turn it on and they would leave.

However, at times I had to walk in to the village of Ouzinkie and leave the cats home alone. One time close to Christmas I returned from the village to find that Uptight Cat had been into the tinsel on the tree.

How could I tell? One piece of tinsel hung out his mouth and one piece hung out under his tail. I’ve often wondered if I could have grasped each end, pulled it back and forth, and give the cat’s insides a good cleaning.

I jokes. It did look quite comical, though. Then I had the lovely task of pulling the two pieces out of the cat. Fortunately, they came out with no problem.

The individual spines of the papillae are shaped like miniature cat claws, and are very sharp on the ends. This sharpness allows the animal to penetrate tangles or knots with the tongue and tease them apart. These spines are made of Keratin, as are our fingernails.

After the cat eats its prey, he grooms to remove all traces. This is a survival strategy, as he does not want to alert other prey that may be nearby to his presence. Since the cat is small, he can also become the prey, so grooming is done for his safety as well.

A cat will use his tongue to help keep cool — the evaporation of his saliva will bring down his temperature. I have often observed that a cat will lick himself if he is excited or uptight. The tongue treatment apparently is calming.

When a cat is stressed, he will overgroom. His grooming will become a compulsive behavior, meant to calm him. This grooming releases endorphins. So, licking himself when he is stressed or anxious can be soothing to him.

I observed this behavior first-hand when I brought home my present cat, Pogo, from the shelter in Juneau. Pogo tends to be a skittish cat, and after seven months in the shelter, where dogs in one part of the building yapped, barked, or howled 24/7, he was not in good shape.

He had licked and/or pulled all the hair from his stomach. His nipples looked sore and inflamed. Strips down his back legs were devoid of fur because he’d pulled it all out. The fine black fur was gone from his ears — they looked like parchment. 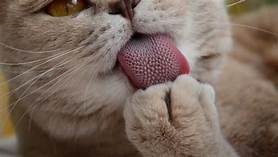 Now, three and a half months later, after living in a quiet, peaceful, loving environment, he is a different cat. The fur has all grown back and he has become much more calm and friendly. I’m so glad he has recovered from his traumatic adventure.

Even though your cat has a formidable tongue, he has fewer taste buds than we humans. Generally cats cannot taste sweets. They normally eat only meat. Their taste buds do not detect sweet flavors.

That does not explain why cats sometimes like some sweet things. For example, my mother had a cat that loved cantaloupe. If you cleaned and cut up a cantaloupe, the cat would be nearby, meowing for his share.

Sometimes people think that they need to bathe their cat. Yes, there are some cases where it becomes necessary. For example, if the cat gets covered with so much mud that it would be difficult to clean off with the magic tongue, you can help your cat by washing off the mud.

However, normally a cat will clean itself. Your vet will tell you not to clean your cat, because you are removing protective oils from their fur. Never fear, except in extreme cases, your cat has the habit of cleaning itself thoroughly without your help.

Your cat’s tongue does an amazing trick when he drinks water. Watch the cat’s tongue closely sometime and you can see the magic.

Science tells us that the cat pretty much defies gravity when he drinks. You can see how fast the tongue moves. It barely brushes the surface of the water before pulling 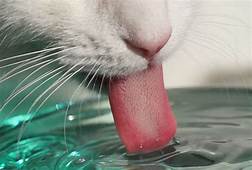 it quickly back up. This darting movement forms a column of water between the moving tongue and the surface of the liquid. Then, with a snap of his jaws, the cat swallows it.

That cat tongue laps at a rate of four times per second. This is too quick for the human eye to see. It took a series of high-speed photos for researchers to be able to see the cat’s drinking process. Another miracle of creation!

Information for this article came from three sources:

5 Awesome Facts About Your Cat’s Tongue

8 thoughts on “Do You Know These Cat Tongue Facts?”