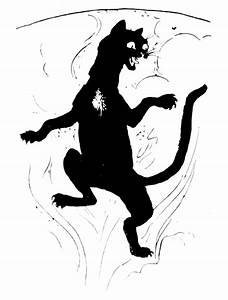 Welcome, two-legged readers. It’s Lucinda the literate cat, inviting you to my latest review. This time it is another chapter of the book, The Mythology of Cats. The chapter is titled The Caretaker Cat, and points out some excellent traits that can be found in your favorite feline.

The book mentions that there are many stories of how a cat managed to win great wealth for his two-legged. Ultimately, it is the two-legged’s trust of the cat that turns misfortune into gains.

In today’s world, cats fill many roles — as charmers, healers, or helpmates. Though there are far too many homeless cats in the world, it is good that today there is a great demand for their services in helping the elderly, the sick and the terminally ill.

I think it is very good that we cats are being pressed into service as healers. Why, our purr alone can help the process. The purr helps relieve stress. It’s rather like a mantra that we use for personal meditation. Because you can hear it, too, it also helps you.

I am pleased to see this book recognize that the caretaker cat role predates the naming of the dog as man’s best friend. Cat medicine and divination existed as far back as the Holocene epoch. Thus, the dog can just take a back seat. His friendship became recognized after you learned about our 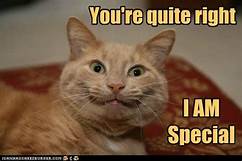 The chapter points out that in Scotland, single standing stones of the Neolithic Age are often known as “cat stanes.” No one remembers now what their purpose was, but I would guess these early people recognized cat superiority, and paid us homage.

In Europe, the cat became a talismatic cat whose power could heal. How the healing takes place is not known for sure, but the theory is that it may have to do with love. As you two-leggeds love your cat, that love extends beyond you and becomes a catalyst that brings about well-being.

It works both ways. As you love your cat, he or she in turn loves you, and the love can create a healing process for both of you.

I see this love interaction happening between my CCL (Cantankerous Cat Lady) and my old cousin, Pogo. When he came to us, he had many health issues. The exchange of love between him and the CCL has definitely had a positive effect on my old cousin cat. He is in much better shape than he was when he arrived. 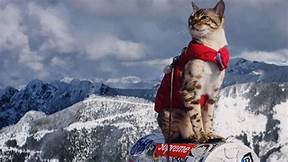 healing. In one story, Bobby, a 14-year-old boy, is drawn into a cycle of darkness and melancholy. He becomes so bad he almost reaches a catatonic state. At 14, he becomes frozen inside his own mind.

I had to look up “catatonic” in the Memory Library. It refers to a state of muscular rigidity. There is a lack of movement and activity. It doesn’t sound like something a cat would enjoy. It bothers me that there is “cat” in the word “catatonic”, as I don’t feel this state is a likely condition for a cat.

Bobby’s support group made a plan. The doctors and parents watched through a one-way window, and someone brought Bobby into the room, set him in a chair, and put a kitten in his lap.

After a few moments, Bobby bent his head forward and looked at the kitten. Several minutes later, he raised his hand, something he hadn’t done for months, and then petted the cat. Later, he tipped his head to one side and showed an expression that was almost a smile.

After being alone with the cat for more than an hour, he talked to it. Though his voice was flat and expressionless, this bit of speech represented an amazing step forward. I’d really like to know if he healed completely.

Once you two-leggeds believed that cats could cure blindness. The paw of a cat was placed on the blind person’s eye. The cat’s pad supposedly became helpful in remedying the blindness. People also used cat eye fluid, or tears, as eye drops.

Of course, I know we are remarkable, but I do enjoy reading these stories that show some amazing things we have achieved. It is nice to realize we have used our healing powers to help two-leggeds.

The author comments on the gaze of the cat, which is healing, revealing, and sometimes annoying 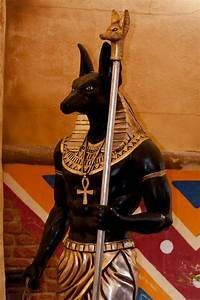 to two-leggeds. Because of this gaze, Egyptians recognized psychic activity in the cat, comparing it with the hawk-headed god, Horus, son of Isis.

Legend said that Horus could see around, into, and above simultaneously. Now, I can see that many would believe the cat to have such abilities, as we often seems to know ahead of time that something important will arrive or happen soon.

Cats who are symbols of the happy heart were common in the old days. This idea dates back thousands of years; the cat supposedly visited virgins and blessed households.

Part of the reason for this belief had to do with our love of staying warm. As the cat warms itself, it also warms its two-legged companions, but not just on the outside.

Yes, we do love warmth. We often find the only spot of sun in a room and lie down in it. Or perhaps we crawl under the bed covers, the same as you do, and sleep very well. I can understand why you like your warm blankets. They add a great deal of comfort if the room is cold.

Did you know the Japanese once believed that the cure for stomach cramps was a warm cat placed on the hurting place? The cat has also been used in a similar way for relief from melancholy and epilepsy.

Our wonderful tail is the most widely-used part of our body when it comes to healing. It is considered the bringer of balance. Thus the cat waves its tail at illnesses and often cures them. I only hope that the tail remains on the cat when this remedy is used.

The more of this book I read, the more I like it. The author seems to recognize our many superior qualities and writes about them in this book. Though I offered this book in the last post about The Mythology of Cats: I’ve asked the CCL to put it up again. You might really like your own copy.

The Mythology of Cats:  Feline Legend and Lore Through the Ages