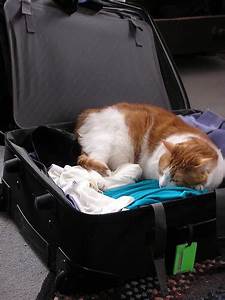 Have you observed that cats, like people, each have their own individual personalities? They are all a little bit different, just like us. Each one seems to have some cat habit that is special to them. It is fun to notice the little quirks of behavior each one has that are theirs alone.

Please, good readers! Add your own stories in the comment section at the end of the post about your fur baby’s strange habits and behaviors, as we will all enjoy reading them.

In my Kodiak days, Uptight Cat and Loose Cat had their share of unique traits. Uptight Cat could have been called Retriever Cat. We had a rubber mouse with a long nylon line attached that he loved.

You could move that mouse in front of him a couple of times and then throw it into the next room. He’d run and fetch it, return with it, drop it in front of you, sit down and meow, “Again, please.”

Loose Cat was no good at fetching, but he had his own set of foibles. One of my favorites: He’d be sitting in a comfy chair. We’d open a large paper bag and place it right next to the chair seat, open end up.

The cat would stare down into that open bag, slowly leaning forward as he focused his gaze on the bag. Finally, as if mesmerized, he would fall into the bag. Of course, it would fall over with the cat inside. Then he’d go to sleep.

He lived up to his name, as he had the “loose” part down. Roll him on his back and stroke his tummy, saying “Dead cat, Lou.” He’d fall asleep without making another move.

Cats seem to develop very strong sleep habits — not surprising, since they sleep more than they are awake. Sam Cat, 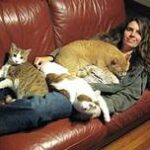 my Spruce Island cat, liked to sleep under the covers with me. When I was ready for sleep, he’d come and ask me to lift the covers for him.

He’d crawl in,turn around, and with his body under the blankets, put his head on the pillow next to mine. Then one paw and leg would snake out from under the covers and streeetch up onto the pillow. Then he was ready for the night.

Carlos, on the other hand, finally learned to sleep on the pillow next to mine. After a thorough bath, he’d curl up on that pillow. Since I then could move around in the bed without disturbing him, this sleeping spot was perfect.

Carlos had a full set of behavioral foibles. One involved finding the highest point in the house for a cat observatory, a common habit among cats. They like to feel they are above it all.

Carlos would jump from the floor to the counter top, and from there to the top of the refrigerator. One more jump took him to the top of the kitchen cabinets. Here, he had a superior view. He watched the world from a safe distance. 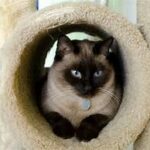 Maxine, my Siamese, had her share of unusual characteristics. In the bedroom on the far side I had a small round “cat cave,” covered with carpet. It had two levels. A door on the bottom let the cat in. The second level floor was cut away so that kitty could jump up there from the first floor. Then a second level opening let kitty out again.

Maxine would get a running start, jump on the corner of the bed farthest from the cat cave, run across it diagonally and dive into the cave opening, then immediately jump to the second floor and out the other opening. She really enjoyed this game, and would often charge across the bed several times of an evening.

When it was time to sleep, she developed a sweet habit. She would curl up next to me and place one of her paws on my hand. Then we’d sleep. That sweet, trusting gesture would warm my heart, especially as she was a bit wary when I first got her. She’d lived with a family with kids, and though they weren’t mean to her, they apparently made her very nervous.

Sometimes cats have strange food likes. My mom had a cat that loved cantaloupe. You couldn’t cut a cantaloupe 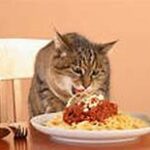 without the cat appearing. He’d start meowing for his share when you cut it up. I’ve often wondered why that particular food appealed to him.

Uptight Cat was crazy about crab meat. I’m not really sure if cats are supposed to eat crab meat, but “supposed” had no meaning to him.

If he smelled it, he yowled until you gave him a taste. One time, someone brought us a fully cooked king crab in two sections. We had to go somewhere, so we put it in the sink to shell when we returned.

While we were gone, Uptight got up on the sink and wrestled one of the halves of that crab onto the floor, and tried to figure out how to shell it. Fortunately for all concerned, he didn’t get far with the project.

We had a little cat for a while in Seattle that did not understand moderation. I had the phone on a small table in the living room. There was no chair there, so I’d sit on the floor to make phone calls.

Once I got on the phone, the cat would run up and hurl himself at the arm holding the phone, wrap all four legs around it, and kick. It made placing a phone call a whole new experience.

You had to be careful not to walk too close to the bed in daytime if he was on it. He’d do a flying leap from the bed, all four legs outstretched, and make a grab for you. Crazy animal! 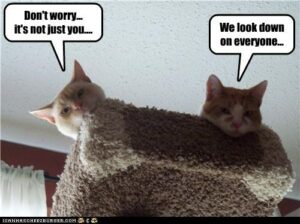 Speaking of eating strange things — one time I had a couple of balloons in the house, purchased for some special occasion. I went to work that day and left the balloons in the living room.

When I came home, one balloon was missing. Where did it go? Strange…

That night, the cat would not eat. The next day, he laid around without much energy, and still wouldn’t eat. Was it time to visit the vet?

Then he spent some time in his cat box. When I went to clean the box, I was astonished. There in the box, curled into corkscrew tightness, lay the balloon. How amazing, that he was able to pass that balloon completely through his system. Some things are truly miraculous.

Pogo, my present cat, has his own share of unique habits. He does something strange before he drinks from his water dish. He will scratch at the floor next to it a couple of times, and then drink. I have no idea the reason for this behavior.

He also has his own ideas about sleep-time. He wants to sleep as close to me as he can get. I try to arrange my arms before he gets in bed, so I know I have enough room, but it makes no difference — he will plop down right on top of them.

I’ve tried to move him over. It’s like moving a dead weight. He’s happy where he is. Eventually we work out a compromise, but always after a bit of readjustment.

Now, Pookie, one of the feral twins, had her own agenda when it came to sleeping. For five years, my friend, John, lived at Banjo Beach. Poo thought John was the cat’s pajamas.

At night before bed we’d play a couple games of cribbage. Poo knew it would soon be bedtime, so she’d come 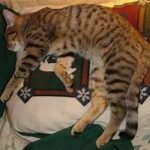 downstairs and sit next to John. She’d reach up and pat his knee and meow at him. “Aren’t you coming to bed now?”

Then she’d go upstairs and wait. When John came to bed, he always slept on his back. Poo would stretch out on his chest and go to sleep.

I taught both Carlos and Pogo a little habit that we all enjoyed. I like to lie down for 30 minutes to an hour after lunch. I’ll throw a blanket over the bed and call, “Cuddly cat.”

The invited cat would enter the room, jump on the bed, and when I raised the blanket, crawl in and curl up next to me to sleep. Such tender moments! I relished the chance to cuddle with them.

I’m sure I’ve forgotten some good stories, but these will have to do for now. Don’t forget to put your comments at the end of the post. Thanks for reading.

6 thoughts on “Does Your Cat Have A Unique Cat Habit?”