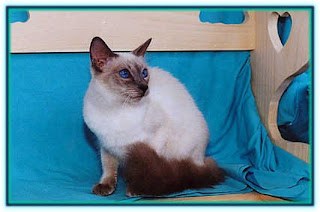 Although there are no truly hypoallergenic cats, you can find some breeds that can cause fewer allergic symptoms. An allergy is caused when the immune system responds to otherwise harmless substances called allergens.

A person with a hypersensitive immune system can trigger an allergic reaction when that person encounters a cat. Though many think it’s the cat’s fur that represents the primary allergen, this belief is false. Instead, it is related to the presence of a protein known as Fel d 1.

This protein may be found in a cat’s saliva, dander, and urine, indicating that cats with less fur can be less likely to collect allergens and can perhaps provide less problems because this cat can prove easier to clean.

My references for this post have reached close to the same conclusions about cats that cause reduced allergic reactions. Therefore, the following six breeds would be my recommendation if you want to try to find a cat who does not cause such severe symptoms.

The Sphynx, though described as hairless, does have a fine, downy fuzz. This fuzzy coat feels almost like suede when you stroke it.

Is dander the root cause of your cat allergy? Dander refers to minute scales from hair or skin. These can produce allergic reactions. They contain the protein, Fel d 1, which can be found in the animal’s saliva, dander, and urine.

As the Sphynx lacks much in the way of fur, he will not have as many allergens, though the cat still creates dander. He needs frequent bathing — weekly is recommended — because of excess oil from kitty’s skin. This bathing minimizes the dander present.

The Sphynx does require extra care. Besides his weekly bath, he has large ears, and these need daily cleanings to keep them in top shape.

This cat is affectionate and extroverted. The cat shows friendliness toward strangers and affection for his human parents.

The Devon Rex, also known as the Devonshire Rex,  receives the recommendation as a good cat for folks with allergies, as the cat’s wavy coat does not shed much, thus minimizing the spread of dander and other allergens around your house.

These cats have only a single coat of fur, which indicates that they shed far less than other breeds. He does not require as many baths as a Cornish Rex or a Sphynx. However, his paw pads and ears do need frequent cleaning to remove the build-up of oil.

This cat has earned the title of “monkey in a cat suit” because of his circus-like antics. He gives affection to his humans, and likes to be involved in what they are doing. His nature is outgoing and affectionate.

As with the Devon Rex, the coat of the Cornish Rex is short and wavy and doesn’t shed as much dander as cats with long hair or dense coats. These cats, like the Devon Rex, have just a fine undercoat. They have no top coat at all

This cat also has a coat that feels much like suede. He needs a weekly bath and daily ear cleaning. The coat is short and wavy.

This cat, a very intelligent and active animal, is very playful and sociable, and should make a great companion cat.

This cat is also known as the Siberian Forest cat. Its coat is medium-long and thick, as it is designed for cold weather.

Though you would not think this cat would become a good hypoallergenic breed, the Siberian sheds less, has less dander, and will produce lower levels of the Fel d 1 protein than other breeds. The coat is very thick and tends not to mat or tangle, so weekly brushing is sufficient.

This cat proves affectionate, playful, and intelligent. He also loves to jump. Though he doesn’t look the part, he’s a good hypoallergenic choice.

The Balinese is much the same as the Siamese cat breed, except with long fur. Actually, the Siamese is also supposed to be low-allergen, but no scientific evidence of this fact has been forthcoming. They do have a low maintence coat that does not shed much, and they only need weekly brushing.

This cat’s Balinese relative, despite its long cat, is known as a low-shedder who just needs a weekly brushing. It produces lower levels of the Fel d 1 protein.

As with the Siamese, the Balinese likes to communicate with his people. He is social, and has been known to be influenced by the moods of the people around him.

The Javanese came about when a Balinese and colorpoint shorthair were crossed, giving us a cat like the Siamese but with long hair and a wider range of coat colors. Again, as with the Balinese, these cats have no undercoat, so they don’t shed much, and can be brushed weekly.

An intelligent, playful and affectionate cat, this breed will converse with you in the manner of the Siamese.

These Cats Have the Lowest Fel D 1 Protein Levels

It interested me to see the Bengal on that list. The reason: The Bengal spends less time grooming, so does not spread allergens with his saliva.

If you long for a cat and are allergic to these sweet creatures, you might try one of the breeds on this list. Perhaps you will finally find an animal that you can live with in spite of your allergies.

One very important thing: If you do have an allergy problem, be sure to clean your floors quite regularly to keep down the accumulation of dander. It’s a precaution that will help you.