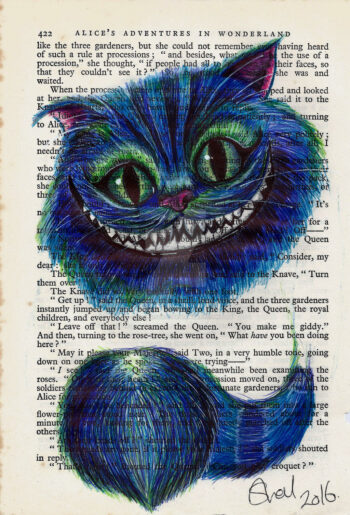 Read of these 8 stories about famous cats in literature. These books may be ones you have read, but if not, you might consider them. I see a couple on this list that I have not read, so I might just have to do a bit of ordering of my own.

These represent just a few possibilities. Perhaps later I’ll summarize more, but for now, you can gain a good start from these. If you have other books with a compelling cat character, please mention them in the comments so perhaps they can be included next time.

If you wish to add any of these books to your personal collection, I have added Amazon links so you can purchase them. As an Amazon associate, I earn from qualifying purchases. Without further ado, here we go!

I used four references for this post, and, not surprisingly, all four of them included Lewis Carroll’s Alice’s Adventures in Wonderland. I’m guessing we have all cut some literary teeth on this book. It is true — the Cheshire Cat wins as perhaps the most influential cat in literature.

Though some of the philosophical statements made by the cat did not make sense to Alice; nonetheless, he acts somewhat as a guide to Wonderland and gives Alice information about its inhabitants.

The Cheshire Cat proves indeed cat-like, as he’s sometimes sweet and sometimes baffling, and as cats do, generally does whatever he wants. He’s a grinning cat who can disappear while leaving his grin behind. Alice remarks that she “has often seen a cat without a grin but never a grin without a cat.”

That’s a happy, positive image to leave behind when you have to go.

T.S. Eliot wrote this book and Andrew Lloyd Webber turned it into a Broadway showstopper called “Cats.” All the cats in this book may vie for your favorite, as the book contains many worthwhile characters for you to enjoy.

I’ve written a review of one of these cats — Macavity, who ranks as the feline equivalent of Sherlock Holmes’s Moriarty. Macavity proves a brilliant criminal, especially as whenever a new crime appears on the books, and Macavity becomes the prime suspect, he is not there! How could he have committed it?

The book contains many fabulous feline characters. Which one do you choose as a favorite?

The Master and Margarita

Have you met Behemoth? He’s the enormous black cat who has a cavalry moustache and who fils the role of the obnoxious sort of cat who leaves an indelible impression on the reader. I guess this becomes one book I’ll have to buy, as I’ve never met Behemoth.

He’s quite a cat — he enjoys vodka and pickled mushrooms. He smokes cigars and owns a pistol. He makes endless jokes; he can walk on two legs. Though he leaves an indelible impression, he’s friends with the devil.

Kafka on the Shore

This book is another one I want to read, written by Haruki Murakami. A young child, Nakata, experiences a sudden blackout that leaves him with amnesia. The memory loss erases his ability to read.

However, though he has lost his memory, in return he finds he can now communicate with cats. Oh, boy, would I like to bring him home for a while! I keep wondering what’s going on in my kitty’s head.

Murakami likes to include cats as characters in his writing. Often they appear as otherworldly, mysterious creatures carrying a hidden message. In this story, he includes a smart, sophisticated Siamese cat who likes to quote from Puccini operas.

The Siamese gives great aid to Nakata in locating a missing cat. It’s nice when a cat can help out!

The Amazing Maurice and his Educated Rodents

Excellent! I’m finding lots of new stories I want to read. I’ve long been a fan of Terry Pratchett, who wrote this book. Pratchett’s writing has sent me into fits of  uncontrollable laughter more than once while reading his “Diskworld” books. This one must surely be a winner.

Maurice appears as not an ordinary cat. He can talk, so that’s helpful. He teams up with a band of intelligent rats and a “stupid-looking kid” who plays the pipes, sort of. The cat hatches a plan for a con. The rats “infest” a nearby town, and for a fee, Maurice will send his piper to lead the rats away.

Knowing cats, I can believe that if they could talk, they would come up with all sorts of cons and schemes to keep us on our toes.

I don’t know about you, but Bill Watterson’s cartoons featuring Calvin and his stuffed tiger, Hobbes, have long been among my favorites. Wouldn’t it be nice to have a talking tiger who spent his days with you, and kept you entertained and informed?

Hobbes, of course, has to express his opinion of us, but he can be the voice of reason as opposed to the instigator of trouble. We could consider him Calvin’s conscience, but we can also see that he plays the role of Calvin’s inseparable friend.

What a pair! It’s good to meet a walking, talking tiger who can be such a good friend to a little boy.

Everyone knows about Dr. Seuss and his most famous creation, The Cat in the Hat. Commissioned to write a story for first graders that they couldn’t put down, Theodor Geisel (Dr. Seuss) came up with this story.

The book achieved its purpose: To replace the “Dick and Jane” primers with something that children would actually enjoy reading. Instead of presenting children (Dick and Jane) in a sterile environment, The Cat in the Hat creates havoc and then cleans everything up before leaving.

It certainly makes sense…give the child something to stimulate; to cause laughter; to show that reading can be fun. Such a book can go a long way toward creating these ends.

Please note: I tried to put the Amazon links for this book at the end as I did with your other choices. Spent a half a day trying to get it to work correctly, and finally gave up. Therefore, you are getting the links first.

This book features a family of cats and their adventures. There’s Orlando the marmalade cat and his wife, Grace, and their three kittens, named Blanche, Pansy, and little Tinkle. If for nothing else, get this book for the illustrations, but the story promises fun as well.

The mom and dad cat have a sweet relationship, though the kitten siblings tend to argue. Their adventures have been put into an entire series of stories. Find good reading in this one.

There are more! These will give you a taste, and perhaps I’ll add a few to the list at some later date. Be sure to leave comments, especially if you have found some of these stories to be among your favorites.