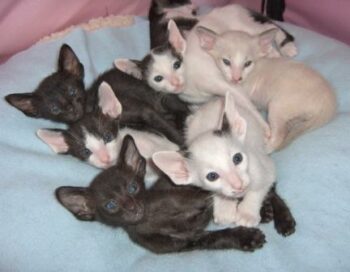 Are you familiar with Oriental Shorthair cats? Because of their relationship to the Siamese, we could call them cousins. When the Siamese first emerged, they did not just include the cats with color points, but also many other colors, without the distinctive points.

By chance and because of their distinctive appearance, the first of these cats to gain the attention of 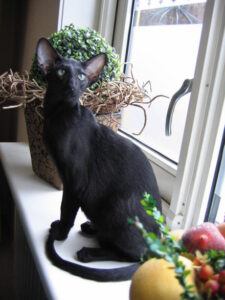 the Western world had blue eyes and the color points such as those that mark today’s Siamese. Even though the original Siamese of the Western Cat Fancy included some colored animals without the distinctive points, eventually they did not qualify as Siamese.

In the 1920s, the Siamese Cat Club of Britain issued a statement defining Siamese. At that time, they stated that they would accept only blue-eyed Siamese. So, solid colored cats with yellow or green eyes became excluded from membership. 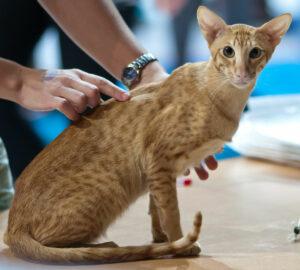 This decision marked the beginning of the history of a separate breed of cat, now known world-wild as Oriental Shorthairs.

The group includes all cats with the Siamese body shape even though they are not pointed. Like the Siamese, they have an elegant, lithe, sensuous body. The cat has a long tail and narrow, wedge-shaped head.

Even though basically the same breed as the traditional Siamese, because of differences in policy and opinion, in North America these cats have the official name of Oriental Shorthair. In Britain, they could be called Foreign, Oriental, or Havana, even though the same breed type.

The name “Havana” applies to some of these cats because of past history, but they do not have the same characteristics as the American Havana Brown, a cat without the characteristics of a Siamese.

Then, in 1964, a British breeder and geneticist started a ten-year program to create a line of true- 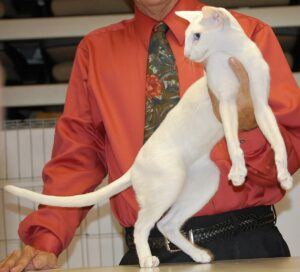 breeding blue-eyed white cats. Two other breeders joined with the first one to forward this project. The cats that emerged proved attractive indeed to the cat fancy.

This program became very successful, and the new breed emerged as the White Foreign or Foreign White. By 1977,these cats bred true, with blue eyes as brilliant as those of any Siamese. In 1978, the breed had its first grand champion, advancing the development.

These cats, then, members of the Oriental Shorthairs, led to the development of other colors, especially the Chestnut Brown Foreign. This cat has the traditional Siamese cat shape, but, as the sire was a lilac-point Siamese, the cat has the potential to breed to both his own color and lilac.

Thus, the cat founded a dynasty of Siamese-type Chestnut Browns, with a Siamese shape and a brown body.

The newest color of Oriental Shorthair has a pale brown coat. Breeding developed this cat, until finally in the 1970s it produced a cat with a color known as milk chocolate; changed later to the name, cinnamon. This breed now appears in several countries. 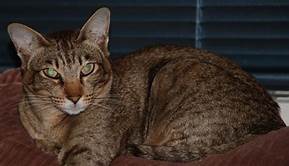 During this period of development, breeders became interested in tabby cats with a Siamese shape. A number of these placed in shows received awards. Then, a British breeder became intrigued by spotted cats shown in Egyptian frescoes. They started with a Siamese-type tabby produced during the development of the tabby point Siamese. Crossing this cat with two Chestnut Browns with tabby points produced some beautifully-marked Siamese-type spotted tabbies.

This cat became known as the Oriental tabby. This name acknowledges their similarity to the Foreign or Oriental Shorthair instead of to the original American-bred Egyptian Mau.

In 1970, an accidental mating between a chinchilla Persian and chocolate-point Siamese resulted in the birth of two Foreign-types of shaded silver kittens. The breeder developing the blue-eyed Foreign White acquired these kittens, their mother, and an aunt. 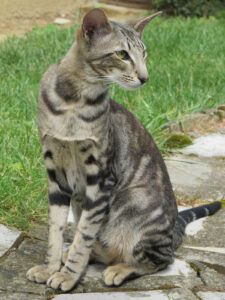 gene responsible for silver, shaded, and smoke colorings is dominant and independent of the Siamese gene. This discovery resulted in a variety of new coat colors which cat fanciers found attractive.

All these cats in this breeding program thus far trace their ancestry back to one of those original shaded silver kittens born in 1970. The silver tabbies have brilliant markings, whose ancestry combines cats from the original Oriental tabbies with those of the silver group.

Britain breeding programs have evolved varieties into a much more svelte animal of the Siamese type. They eventually founded the North American Oriental Shorthairs, an international breed club joined by many Siamese breeders.

The name, Oriental Shorthair, received approval and provisional recognition from the CFA — the largest of the fancier groups — in 1970. The breed produced champions just a year later, and within one season had seven grand champions and a number of “best in show” awards. Also, the CFA featured them among their all-American top 20 cats. 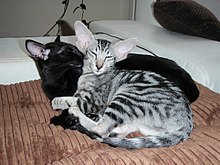 In North America, many more colors can compete for championship honors. Also, Oriental Shorthairs have become well-established worldwide. Even with the confusion in standards, the breed does well.

Personality of the Oriental Shorthair and the Siamese show no differences. In fact, except for some color genes, you will find the breeds much alike. Of course, individual cats will develop their own personalities, and all of them tend to demand a lot of attention from their owners. They will give total devotion to the owner in return.

Though females want to breed early, most breeders wait until the age of the kitten reaches over nine months. These cats make devoted mothers, and they have extremely active kittens. They love to climb, starting with furniture and curtains. If you want a peaceful life, choose another breed of cat.

Reference I used for this post: The Book of the Cat, by Michael Wright and Sally Walters. 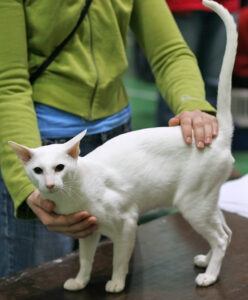